Wrist Pain on the Bench Press: How to Avoid and Address It

In a short poll I did on Facebook, one of the most commonly mentioned exercises that causes wrist pain for my Facebook friends ended up being the Bench Press.

If the bench Press is a lift that bothers your wrists as well, then I hope you check out the video below.

In it, I talk about the alignment of the wrist bones and how these bones interact with the bones of the hand and forearm. In addition, I also talk about how to take care of the wrists to keep them feeling good so that they do not affect your Bench Press training.

So, in review, make sure to keep these three points in mind when you are Benching:

Warm-up: Get some blood flowing into your hands and wrists so that the tissues become more pliable and you can better exert force into the bar.

Stretch Between Sets: You would be surprised how much of a difference it makes for your wrists if you do some light stretching between sets. The Thumb + First Two Stretch that I show in the video above is a favorite of mine.

Use Proper Technique: Part of the correct bench press technique is to keep the wrist straight. Having the wrist bent way back can cause extreme pressure in the wrist. This change may feel weird at first, but over time you will grow used to it and enjoy the reduction of nagging pain in the wrist.

I think these slight changes in your technique, preparation, and approach will pay big dividends for you in your training, by helping you to avoid wrist pain.

If you are experiencing wrist pain, and you want to end it for good, you should check out Fix My Wrist Pain. Rick Kaselj and I worked together on this and it is helping people out already.

If you have any questions, feel free to leave a comment below and I will be glad to get back with you.

Wrist Pain and the Bench Press 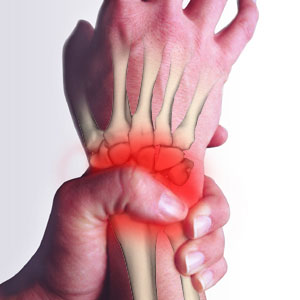 Many people have written me over the years about wrist pain when benching. After all, everyone loves a big bench press.

It’s one thing if you are stalled in the bench due to a technique issue or because you are having trouble deciding on a bench press program.

It’s something different altogether when your bench press is suffering because of pain in the wrist, so annoying and distracting.

So, what I have done is put together a video for you that is what I call a Diesel Work-around.

Well, in industrial settings, when a part of a process breaks or is faulty, but the work still needs to be done, alternative measures can be put into action in order to get the same finished product or desired result.

These alternative measures are called Work-arounds. For instance, if a conveyor belt is shut down, the items being moved can be placed into a cart and moved by hand to the next location, successfully “working around the problem” until it can be fixed.

In the case of the Bench Press, when there is pain in the wrist, we can perform a slight Work-around in order to still get the work done, in order to not miss a workout.

Now, before I get too deep into this, I have to stress this point: If you are injured, you need to address the injury with professional help.

So, if you strained your wrist in a bar fight or because you fell down a flight of stairs in a drunken stupor, you need to go to the doctor, get the problem professionally assessed and follow the doctor’s or therapist’s suggestions in order to completely address the injury.

However, wrist pain does not always mean that there is a break or soft tissue damage, such as that which can occur when you try to touch the stripper on stage and the Eric the Bouncer grabs you and tosses you out the back door into a dumpster.

Sometimes the root of the pain in the wrist is actually something simple such as the misalignment of the carpal bones in the wrist.

The bones of the hand and wrist are supposed to be arranged in a specific order. However, if we are training out of balance or if we have some light trauma to the wrist, these bones can be thrown out of whack, causing noticeable pain and loss of range of motion. 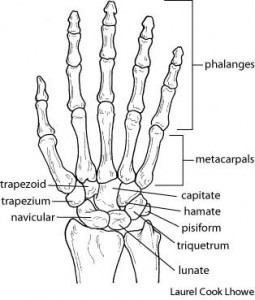 To see what I mean, check out the above picture. It may seem as though the bones seem to be randomly stacked on top of one another, but that is not the case – they are placed exactly how they need to be for optimal performance of the hands and lower arms, and if they get out of whack from trauma or imbalanced strength ratios as a result of your training, you can have some problems.

In cases such as these where the pain might just be a bone slightly misaligned, the following Diesel Work-arounds fit in nicely. They take pressure off of the wrist and allow you to perform work on the Bench without having to miss a bench workout.

Work-around #1 – Use a Thicker Bar

A thicker bar, such as an axle or fat pipe, can be used on the bench press instead of the normal Powerlifting bar. This will feel different to you, but you should notice that there is not quite as much pain when performing the pressing movement.

The force will be spread out over more of the hand and not so much directly on the point of pain within the wrist. If you do not have an axle or thick pipe that is set up for pressing movements, then you might also try a set of Fat Gripz placed on the bar to accomplish the same general objective.

Another suggestion to try is wrist straps. These can help cradle the wrist as you press can be very helpful for reducing pain.

A lot of people think I am completely against wrist wraps, but that isn’t really true. I think they are great for preventing injury and for helping to recover from injury, like if something is “out” in your wrist.

The most important thing to know here is exactly how to wrap the wrists in order to get the right support, which I show you in the video, below.

That wrapping technique is something that you can use on a lot of your lifts when you get into the big numbers. It will give you the support you need for confidence on lifts where the wrist is open for potential injury, such as overhead lifting.

I hope this has been helpful for you. If so, please leave a comment below. I’d love to hear from you.

Thanks and all the best in your training!

P.S. I just got interviewed by Andres Gonzalez of Strongermen.Blogspot.com. Andres seems like a very nice guy who has decided to improve his lifestyle and has been doing a lot to better his health and well-being. In addition to that, he has been interviewing people he has been following who have made strength training a part of their lives. He found my site and said it is something that has helped him out with his journey to become stronger and I really appreciate him seeking me out.

Also, last week, Andres put together this cool video of the Top Nail Benders in the World. Check it out: