How to Become Super Strong WITHOUT Adding Muscle

That may seem like an odd title when so many people spend all their time with new training plans and the hottest supplements to add muscle to their frame. But what can I say? I’m unconventional. 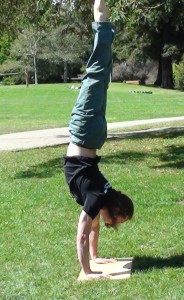 My goal is performance, that is what I can lift, rather then looking bigger. Although I’m tall I’m not a very big guy. At 6’2″ I tip the scales at about 185 right now. The biggest I’ve ever been was just over 190. Since a lot of what I do is bodyweight training adding mass doesn’t really help with those goals. Thus I choose to stay small. But I also like to lift heavy stuff.

It’s because of my size that I commonly hear the phrase, “You don’t look strong.”

But what does strength have to do with looks? For the average person the appearance of muscles means strength, but that’s only a piece of the puzzle if you want to become truly strong. In fact it’s not even near the top of the list of necessary things. And just because someone is muscular doesn’t necessarily mean they’re very strong either.

How do you get stronger without adding lots of muscle? There’s a few ways.

A muscle can learn to contract harder without the cells being any more in number or size.

Your skill and technique can be improved.

Use your mind to access more of the strength you already have.

And the main method I want to talk about today. The muscles are just one of the things that are used in lifting. Sure they get the spotlight and all the publicity, but for the super strong you’ll want to focus elsewhere. I’m talking about the tendons, ligaments and bones themselves. Supports and partials are two ways to train them.

Did you know that famous strongman Louis Cyr (whom a movie is being made about right now) back lifted more than 4000 lbs? If you don’t know what the back lift is, its a support where a platform is placed across the back. The legs and arms are straightened to lift the weight only about an inch or so. This was also a favorite of Steve Justa. This position is sometimes held or just done quickly. Think about this for a second. If you tried to support that weight what would happen? I don’t know about you but it’s likely my bones would break under such a load. Perhaps your femur my snap or more than likely a joint would give out. Yet in working up to this feat Cyr was able to handle massive weights. I’m not sure if this made his bones any thicker in dimension but certainly denser and stronger.

There are several old-time lifts called supports because you support the weight rather then lifting it. Though often in order to hold a support you need to do a lift to get it in place which requires a short range lift. Here’s a list of a few of them besides the back lift:

Leg press support (like in a leg press machine but just supporting the weight. Some of the old-time strongmen would support a plan of wood on their legs which people would sit on while they laid on their backs)

Overhead support (This was a favorite of John Grimek and it is said he worked up to supported 1000lbs in this position. They would support a barbell from chains hanging off the rafters and then lift it up into the support position.)

Standing support (Think of the top position of a squat with the barbell across the shoulders. Just try this with a heavy weight and whatever you’re use to squatting will feel very light in comparison.)

Wrestler’s bridge support (This is a personal favorite of mine as a neck strengthener. Get in the wrestler’s bridge position and lift a barbell or have someone sit on you to add resistance.)

There’s many more possibilities. You could do a one arm overhead support or a zercher squat support. Use your creativity. Anton Riha is shown here supporting 1400 lbs in quite the standing support.

The bones are much stronger at supporting weight then the muscles are in lifting, especially through a full range of motion. Which brings me to the next subject…

These are also great for people engaged in any sport or martial art. How many sports involve even parallel squats? Very few. Instead you can get stronger just in the top quarter range of motion which will translate over to more speed, bigger jumps, etc.

Look, full ranges of motion are great. I highly advise you to do them. But if that’s all you do then you’re missing out on some of the best training possible to strengthen your connective tissues and bones. If you only ever lift the comparably light weights that you need to for full ranges then you’re not going to build these areas to as great of a degree as you possibly could.

You can work different partials like a quarter, half or three quarter squat. You can make even smaller jumps doing progressive distance training. There are many benefits and different ways to use partials.

One of the simplest in my opinion is working the top quarter range of motion like in this rack pull here, a recent PR for myself. You can not only use really heavy weights but partials tend to be even safer than full ranges of motion.

This can be done with any exercise though they’re typically done with the big compound movements like squats, deadlifts, bench press, overhead press and sometimes rows.

Supports will not add muscle because the only work they’re doing is to support keeping the bones in place. I suppose for a completely untrained individual they’d get that effect, but not for your average trainer.

With partials it will depend on how you train them. More reps and volume could add muscle. But if you do them in my preferred way, working at high intensity, you’ll get stronger but without much size.

All of these lifts will strengthen your bones, tendons and ligaments. You don’t need to do them all. Just pick one or a few to start with. As with everything you’ll want to build up to this slowly. Don’t’ go too far too fast as you body may not be ready for it. But you may surprise yourself in a short time just how much you can handle.

For more information check out my newest book Deceptive Strength available here. Right now you can grab it along with a bunch of bonuses.