The HARD is What Makes it Great

I was recently asked by one of the members at TheGripAuthority, what I do to stay motivated. What do I do if I fail at a lift. How do I keep going? How do I cope with failure when trying to get stronger?

Failure is a part of lifting. It happens and you can’t let it bother you.

I fail all the time. If I stopped my workout every time I failed, I would probably never finish a workout. I miss on Log Press, Farmers Lifts, Gripper attempts, Pinch Lift attempts – you name it and I generally fail on it at least once a workout.

Before I broke the record in the Two Hands Pinch, I must have failed in competition at least 4 times (it feels like it was 20 times, but it wasn’t). For each competition, I trained for months on end, traveled all over the country, had people I didn’t even know pulling for me to break it, contest promoters invited me to stay at their house so their wives could cook me a home cooked meal so I didn’t have to eat fast food. This was all to give me the chance to break the record and I failed multiple times.

I’d often feel bad because I let those people down when I missed the mark, but I’d keep it in mind that I had a lot of people behind me along the way, even if they weren’t there with me for each workout.

I train alone and have no one to push me to go downstairs and get going. I don’t have anyone here on a day-to-day basis to yell at me to get my ass in gear. It’s up to me. I just keep going, even though it is hard.

Whether you train Grip, Strongman, Powerlifting, Olympics Weightlifting, Kettlebells, Feats, etc, it’s all hard. If it were easy, everybody would do it – “The Hard” is what makes strength training great.

Sometimes, I think I get stronger because I don’t give up when I fail.

But I don’t give up just because I miss it the first time.

Years ago, Clay Edgin, a fantastic Grip strength competitors from 2003 to 2006 (no longer competes), said that when he converted over to Strongman he always made sure to try a PR lift in Overhead Lifts (Log, Axle, etc.) at least 12 times because he felt he needed that many attempts for his mind and nervous system to be geared up enough to get it. He even put up a video showing himself missing time and time again and then finally getting a PR overhead Push Press after nearly a dozen misses.

When was the last time you tried something 12 times before finally getting it?

I think there might be something to this. I don’t have any research, just experience…

A few weeks ago I was training the Wrist Developer and failed on like Level 6. So, instead of giving up, I worked back down a level or two and began adding rubber bands along with the spring to work near Level 6, just to get the feel of the additional tension, and I ended up getting Level 6 when I tried it again.

Earlier this week, I had a very similar experience, although it was a bit different.

It just didn’t feel right. The equipment felt heavier than normal. The joint felt like it was encrusted and wasn’t working properly, and I’d already done a ton of wrist work, so I began to wonder if I’d be able to get it.

Since it felt so damn hard, I backed off to Level 7 again, and to my surprise that felt much easier. Although Level 8 felt freakin’ impossible, I knew going in that I could get Level 7 because I’d been owning it for quite some time.

What happened next was crazy.

A lot of people don’t know this, but I speak Spanish. I have a crappy accent, and so I tend to keep conversations short, but I can make out alright if I need directions in a city or something like that.

For whatever reason, I started doing this positive self talk in my head in Spanish, and before I knew it I was speaking out loud. Rattling it off started getting me pumped, so I kept going and before I knew it I was yelling at myself to get Level 8. I felt much more awake – more PRIMED – than I had before, like the blood was pumping through my forearms and hands better.

The Wrist Developer felt lighter now, and sure enough I hit Level 8.

I managed to get all of this on camera, and have been trying to upload it all week, but the sound has been messing up when putting it on YouTube. Finally tonight it came through right, so I wanted to share it with you all here.

I’ve been pumped up all week about this, and I wanted to share it with you along with part of my mind set in regards to my training. I think this can be applied to just about any training program, regardless of your goals.

Next time you fail, and you will, dust yourself off and try it again for me. Try micro-loading like I did with the rubber bands, or try whipping yourself up into a frenzy. Maybe even try the 12 Attempt Method. And even if you don’t get it after repeatedly trying, you’ll be building yourself up for the next time you train and maybe you’ll get it then.

Whatever you do, don’t just give up and quit – that’s the biggest mistake you can make.

Check out more videos on my YOUTUBE CHANNEL < = Go Now! 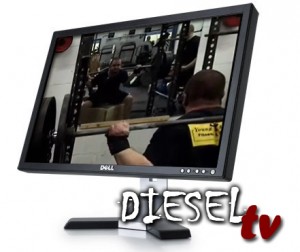 This weekend, I will be holding another massive Grip Training session at my garage in preparation for the annual Christmas season Grip contest, the Gripmas Carol.