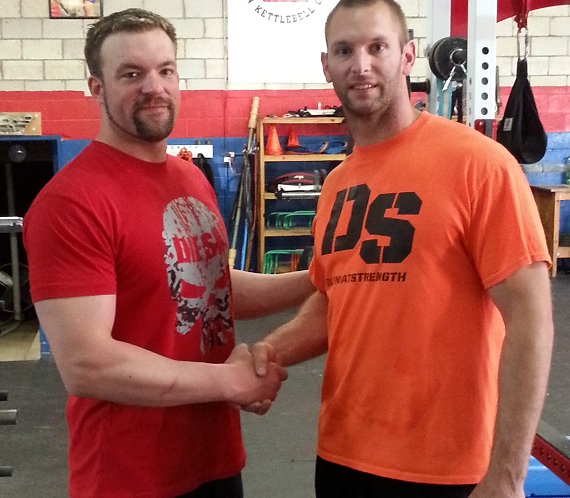 On June 14th, 2014, I competed in the North American Grip Sport Championship at Durniat Strength Gym in Wooster, Ohio.

This is the 3rd year in a row it was held at Andrew Durniat’s gym. He has also been the reigning North American Champion every year since 2011. Andrew runs a nice demanding competition every single year, featuring a mix of the classic events (Grippers, Two Hands Pinch, and Axle Deadlift) plus other new challenge events as well (this year the Pinch Block Curl and the Sledgehammer Choke).

Recognition is in Order

Before I get too far, I absolutely must give credit where it is due. This year I am in the best shape of my grip career and I owe all the thanks to a handful of people.

First and foremost is my dietary coach, Joe Carabase. Without him, my diet would be a mess and I would most likely still be fat, in poor condition, and hurting all the time.

Next is Luke Raymond and Dan Ely – I began training with Luke in the Fall of last year and Dan Ely came on in the Winter of this year. Having these two guys around so we can all push one another has been HUGE for my training. I can only hope that they have gotten as much out of training with me as I have from training with them.

The list of competitors was quite a bit different this year from last. It seems like about half the group is truly a core group and shows up to throw down year in and year out, while the other half is more dynamic and changes from year to year. Either way, this year saw many hardcore veterans and first-time competitors who will be forces to reckon with for years to come.

Grippers have been an event that have been known to give me trouble, as my crush generally lags behind my other events, especially in comparison to other top grip athletes. This year, my goal was to make up some ground. I began training grippers every 4 to 5 days, and many times more than once a week, and it paid off, as I was able to close a 175-rated gripper Right-handed. I also got a 155 shut lefty.

The grippers used were a set that was purchased from Cannon Power Works by a few members of the North American Grip Sport committee. They were all rated by Cannon, meaning the same device and practices were followed, making it the most valuable gripper set in the world, ranging from 80-lbs up to over 200, in 5-lb increments. I can only imagine the hundreds of grippers that would need to be rated in order to obtain these 30 or so grippers.

By the end of the first event, I found myself behind Andrew Durniat and David Labbe, both competitors in this year’s Mighty Mitts competition at the Arnold Classic, but the gap was not so far that it would be insurmountable.

Here are the videos of Luke Raymond’s and my attempts on Grippers.

As much as I would love to hold the World Record in this lift again, this year it was just not in the cards. I tore the hell out of my right thumb and I had to modify my training through all of April, May and June. I was super stressed about it, because I had actually set some pretty lofty goals made some hard plans, but they went awry, so I had to do the best I could.

Since the implements used for NAGS were virgin plates – they had never been lifted on ever before that day – numbers were down across the board. I sealed the victory in the event on my first attempt with a lift of 224, which was enough to top Andrew’s 219 and 209 put up by David Labbe and Eric Milfeld. On my second attempt, I lifted 239.69, a lift of 105% of bodyweight.

The third event was another one that is a classic thorn in my side. But, since my Two Hands Pinch training had to take a back seat leading up to NAGSC, it made room for more Axle work. In training, I actually worked up over 400-lbs for the first time since 2012, and I think if I would have switched to Sumo Technique a little sooner, I think I could have pushed my training numbers even higher, and perhaps even attained a lift over the 400-lb mark in competition at NAGSC.

As you will see, on my last attempt, I went for 402-lbs, and got it well over the knees, but couldn’t quite hold on until lockout.

The Pinch Block Curl was a new event this year. The design of the implement is to replicate the act of performing a Plate Curl, without having to attach weight to the end of an actual plate. This tests the strength of the entire lower arm and hand at the same time.

Many of the competitors are experienced at training the Plate Curl, so no one really knew what to expect going into the event. I know I had no idea where my lifts would fall against the other competitors, so I made my training as hard as possible, loading my implement with as much of a leverage disadvantage as possible. Apparently, my preparation paid off, as I was able to finish with 44.66lbs with each hand, good enough for second place right behind David Labbe.

Still a fairly new event, the Sledgehammer Choke has only really been contested since about April of 2013. However, I think I have been at 4 of the 6 competitions where it has been held, so this has been a big advantage for me. The biggest advantage was seeing the way other people do the Choke at Gripmas 2013. Instead of trying to radially deviate the wrist, some were allowing the wrist to kick into ulnar deviation and then lock it there, allowing for a bigger tilt and bigger lifts.

Luke really took to this technique in training, working up to over 22 inches almost immediately, once we started training it heavily in May. This variation is MUCH more intense on the wrist though, and he found he could not recover from training it very quickly, so he actually stopped training it about half way through May. I was not getting the lingering soreness that he was, so I continued to work on it, with the main objective of catching up to him as much as I could.

Unfortunately for me, I couldn’t narrow the gap quickly enough, because Luke hit 23 inches righty and 27 inches lefty, to my 22 inches each hand. Despite the fact that 22 inches on a 14-lb hammer (308 inch pounds) actually beat the previous work record on the 12-lb hammer of 25 inches (300 inch pounds), it wasn’t nearly enough to catch up to Luke’s 322 righty and 378 lefty inch pounds. CRAZY!!!

I knew going into the last event that I was slightly ahead of Dave Labbe, by just tenths of a point. So I knew that the entire contest was mine to win or lose. But I really had no idea what Dave was capable of on the event – I wasn’t even sure if he had trained the event before, so I went for broke and tried an all-out PR on my second attempts, both right- and left-handed. Both of those lifts proved to be enough to beat out Dave, so I knew he had him beat. 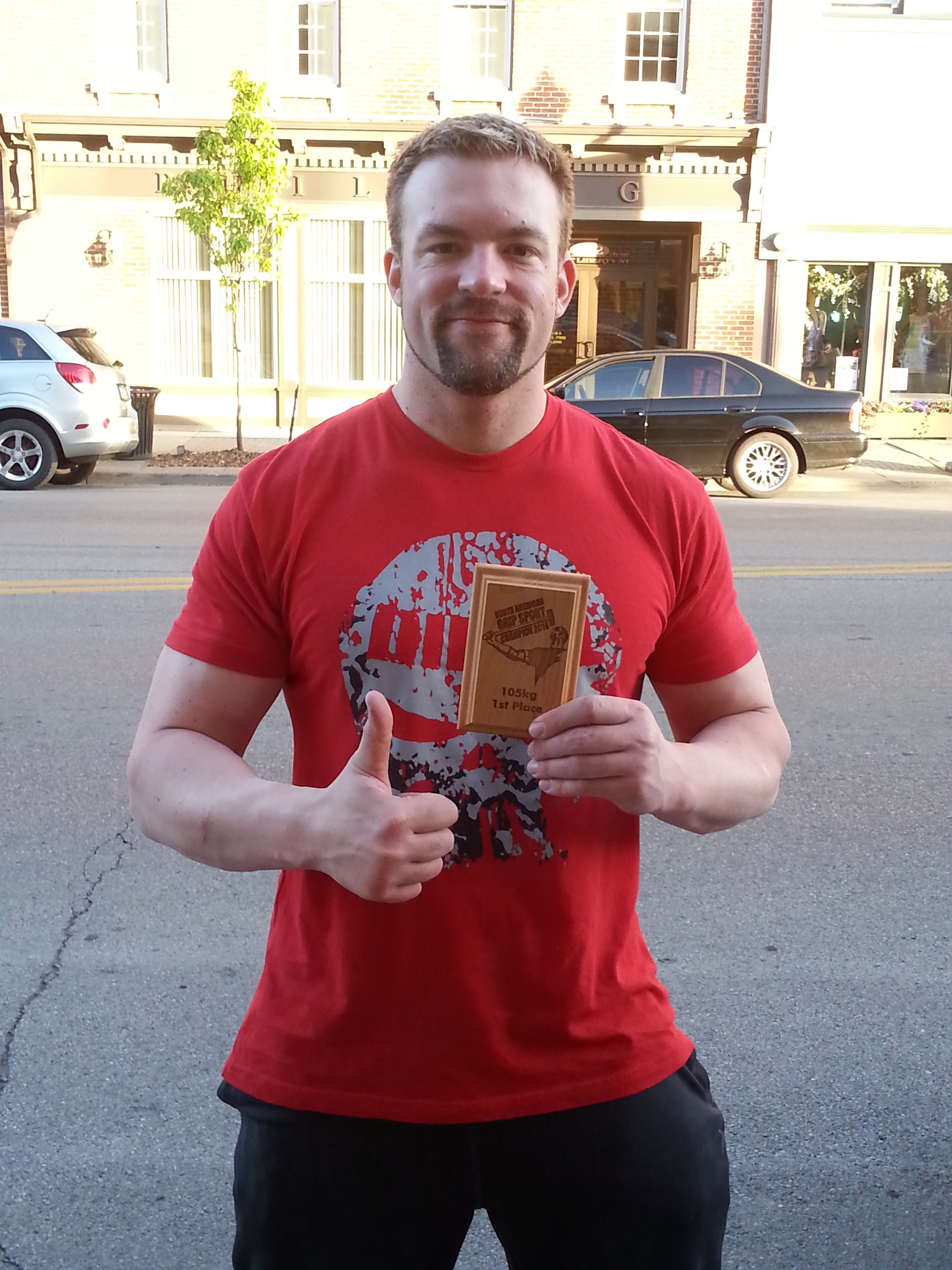 To hear my name called at the end as the Absolute Champion, winning the Overall, was amazing. Once I knew, I gave my parents a call to let them know, since they have been behind me every step of the way.

What was even more awesome about that is they were babysitting my daughter and I even got to tell her about the win and hear the excitement she had in her voice.

Naturally, there are dozens of people I can thank, but the biggest credit has to go to Luke and Dan. I can’t describe the impact it has had for me having them here in the gym.

I hope you have enjoyed the write-up, and I hope it inspires you to try your hand at Grip Sport sometime soon.

From what I hear, Dave Labbe is HOOKED.

Increase Your Two Hands Pinch – Get My Instructional DVD Today