Posts Tagged ‘how to get more powerful’ 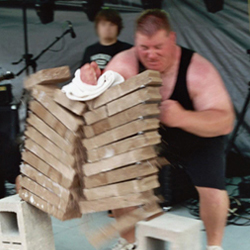 DIESELS! Today I have an interview with one bad-ass son of a gun, Jon Bruney. This dude is FREAKISHLY STRONG. Easily one of the overall strongest Performing Strongmen on the circuit. I know he can out-lift most other performers in more conventional lifts like the Squat, Deadlift and Pressing movements. He’s built like a freakin’ FIRE PLUG, and he gets the guys he trains strong as hell too.

Now, he is teamed up with Dragondoor to write a new book called Neuro Mass. I managed to get a few minutes of his time for an interview about his brand of Strongman Performance, the way he approaches the rest of his training and what Neuro Mass has to offer.. Check it out below.

Jedd: Jon, thanks for taking time out of your busy schedule being an absolute MASTER OF IRON and SLAYER OF STEEL for the interview today. For those who may not be familiar with your exploits of strength and power, please tell us a bit about yourself and what you do.

Jon: Jedd, thanks for having me on today. I’m a performing strongman, motivational speaker, pastor, trainer, and author. I am also co-owner of Submit Strength Equipment and have designed cutting-edge training equipment that is now in use around the world. I am a Battling Ropes level two coach and certified in Controlled Fatigue Training. My brand new book Neuro-Mass was just released.

Jedd: How did you get so involved in super human strength and conditioning, brother?

Jon: I have always been interested in strength. I saw some strongmen performing some feats like breaking stacks of concrete with their hands, and I knew that this was something I wanted to pursue. I was privileged to have the legendary John Brookfield become my mentor. He really got me my start in the world of strongman performance.

Jedd: Awesome. John Brookfield is one of my biggest influences as well. Tell me this, what sets you apart from other performing strongmen out there? What feats do you do in your shows that other strongmen, quite frankly, just aren’t strong enough to perform?

Jon: Jedd, there are definitely athletes out there who are much stronger than I am. But, what makes me unique is the diversity of my strongman feats. For instance, I have had great strength endurance feats, such as pulling a semi-truck and trailer with John Brookfield for the distance of 1 mile.

In my shows, some of the feats include: dead lifting the back of an SUV, breaking stacks of concrete set on fire with my fist, bending steel bars over my head, breaking drill bits, bursting pop cans with my hands, pressing steel logs overhead, and laying down under a bed of nails while my wife jump ropes on top of it.

My favorite strongman feat of all time was performing the human link. I held back to Harley-Davidson motorcycles attached to my arms and let them try to pull me apart.

Jedd: Those are NEXT LEVEL strongman feats right there, my man. RESPECT. But I know that Strongman Performances are not the only gig you do. I also know you work with athletes. Tell us about your training approach with athletes.

Jon: My goal with athletes is to help them to build smart muscle. The focus isn’t just on getting bigger, but better. Smart muscle is muscle that can multitask.

Jedd: Niiiiice! Smart Muscle. Awesome, brother. And aside from your feats of strength, what other kinds of training do you do in your own workouts? When you aren’t destroying steel and piles of bricks.

Jon: In my training, I try to combine three distinct types of exercise into something called a Neuro-Set. This involves the following:

Jedd: That sounds like a combination that is different from just about any system I have ever heard of, especially with the Isometrics thrown in, which I know are HUGE Strength Builders. I also know this is the kind of training you write about in your new book, Neuro Mass. Tell me about this book that is currently sweeping the world and is nearing Best Seller Status on Amazon.

Jon: Absolutely, Neuro-Mass is a cutting-edge training system that…

Jedd: It is funny you bring up Road Blocks, because my last post on this site is about overcoming plateaus in your training. Well, let’s just cut to the chase. Who should pick this book up and why?

Jedd: Jon, it sounds like this book is PACKED with Information. Could you give us a sample routine from the book that we could try to actually experience why this book is so awesome?

Jon: Sure. Try this great bodyweight routine that I recently shared in an article on Dragon Door’s site. It is a Shoulder Blasting Bodyweight Neuro-Set:

How To Perform The Handstand Push-up:

The technique we will use to get into position for the handstand push-up is called “wall walking.”

How To Perform The Hummingbird:

Begin by placing your arms straight out at your sides and lower into a semi-squat position. Now, explosively move your arms up and down within a 6-inch range of motion. The range of motion is extremely small. You’ll find that this innovative exercise has the ability to fatigue shoulders very quickly.

I first saw this powerful isometric exercise performed by my friend Ori Hofmekler. Begin by grasping the end of a heavy towel with one hand extended straight out to your side. Now, with the other hand grasp the towel at chest level. The position looks like an archer getting ready to pull a bow backward.

Try to pull the towel apart. As you continue this pulling motion contract the muscles of the back as hard as possible. As you increase the tension, power exhale through the mouth.

Jedd: That is a Crazy Combo, bro. Where can the Diesel Universe get Neuro Mass?

Jon: Just click this link to Get Neuro-Mass and the Awesome Bonuses. If you order today, there are $789.00 in bonuses available.

Jedd: Jon, thanks for the awesome interview. I know you are super busy, so thanks for sneaking this in for my readers.

DIESELS, Jon Bruney is no joke, man. This guy trains for real and doesn’t mess around. You need to pick this thing up, and right now, you can click the banner below and pick up Neuro Mass and get the $700+ in free bonuses. But it’s got to be today to get the whole package.

Tags: athletic training, how to get more powerful, how to get stronger, jon bruney, neuro mass, strength training
Posted in athletic strength training lift odd objects, feats of strength, feats of strength bending, how to develop power, how to develop strength, how to improve fitness and conditioning | Comments Off on Interview with Neuro Mass Author, Jon Bruney