Greasing the Groove for Gippers?

Will “Greasing the Groove” Help Me Close Bigger Grippers

I got a question on my YouTube Channel about Greasing the Groove for Grippers, and I answered it in a recent video.

Mainly, the writer wants to know if the commonly known “Greasing the Groove” method, which is often used for Pull-ups, Push-ups, and other strength maneuvers, can work to help increase crushing strength with Grippers. Last week, for the 12th time (or something like that) since 2004, I attempted the Mash Monster #3 Gripper. Here is some history about this Gripper line and my battles with the MM3.

The Mash Monster Grippers are a series of Grippers at Gripboard.com that has existed since 2004 to crown the ultimate King of Crushing.

The Mash Monsters were all produced by Warren Tetting, so they are essentially the same springs and handles as you would find in the Beef Builder and Tetting series.

Tetting has produced grippers for decades and the Mash Monster series is just as high of quality as his other gripper lines.

What makes the Mash Monster Grippers so awesome is that they are a very detailed incremental system of grippers, with gradually increasing spring sizes and gradually modified spring depths, so you have a ladder of grippers that are slightly harder with each rung you climb.

My Battles with the Mash Monster Grippers

I began my climb up the Mash Monster ladder in 2004 and quickly closed the MM1 and the MM2.

When I tried the MM3, however, it was a different story. I missed my first attempt, which I believe was in early 2005.

I think a few weeks later, I tried the MM3 again, and once again I had no luck.

Ever since then, I have tried, on average, one time a year to close the MM3, and every single time I have failed.

It has actually become quite a funny story amongst some of my friends. Of course, many of these friends have never tried the MM3…ha ha ha, in your face. WOOOH!

Last week, I decided it was time to get this monkey off my back.

I signed up for the MM3 and it arrived on Wednesday. I took my attempts on Thursday night, and here is the video of all 3 of my attempts.

As you can see, I was definitely able to close the gripper on the 1st and 2nd attempts. I felt it was closed on the 3rd when I took the attempts, but by the video it is hard to tell.

Unfortunately, despite my closing the gripper more than once, I was failed because I was unable to properly document the spacing of the handles after the set and before the crush-down attempt.

The Mash Monster Rules state there must be a clear shot showing that the handles are no closer together than parallel, so I was red-lighted.

I will sign up for the MM3 again very soon and put more attention on my setting for the camera.

Despite all that, I must say that this is without a doubt the STRONGEST my Crush has ever been.

After missing so many times, I am now closing the Mash Monster #3 Gripper.

On top of that, I PR’d in Grippers with both hands at Nationals on June 6th, closing a 180-rated gripper right-handed, and that felt much harder to me than the MM3.

All of this progress has come from following the structure of CBT, Cadence Based Gripper Training, a program I released in the Fall of 2014.

If you haven’t started following CBT in your gripper training, you should.

I KNOW the Cadence Based Training program will help you. Let me prove it to you.

Pick it up today => Cadence Based Gripper Training

Feedback on Cadence Based Gripper Training

And ever since it came out, the positive feedback has been rolling in.

Just finished reading your Cadence Based Training ebook, it has to be one of the best out there for improving gripper strength. I’m going to note down a few things from the book and implement when I start training hand grippers after King Kong… While going through CBT, I couldn’t help but notice something very interesting, that there is some similarities that is also in an experimental program I’ve been working on. Like volume and having the pr syndrome. Any how, it was a very good read and I’ll use a number of the ideas presented in there.

Loving it so far!

I’ve been plateued for awhile on grip so I’ll see what your program does for me. I’ve dabbled in things like hose-clamped grippers, but have noticed how in many cases you end up holding the gripper slightly differently then you normally would which probably changes the strength curve and subsequent training effect. I’ve considered holding closes and it’s nice to find a program from someone with years of experience who has experimented with the concept.

Great e-book Jedd. It contains a lot of good information… I think the the most important factor in closing grippers is holding them in the closed position, preferably slightly (just 2-3 millimeters) beyond the range. That is what i started experimenting last Monday.

Cadence Based Training is my new secret weapon to finally get certified on the COC 2.5. Much of my baseline grip strength has come from years of training holds for time on a variety of events, both grip and strongman. While that approach has been highly effective, it’s now become my limitation. Cadence Based Training, not only integrates this concept, it provides detailed structure and direction to gripper training which WILL get me certified on the COC 2.5. Thank you for your direction, expertise and passion.

I am really excited to have received this feedback from so many different customers. Lots of my products are geared towards complete beginners ONLY, but in the case of Cadence Based Gripper Training, it is something that has appealed to many seasoned veterans as well, so it is nice to know this ebook is helping people at all levels of Gripper Training.

For instance, Amy Wattles is a certified Women’s Captain of Crush for the #2 Gripper. She is REALLY close to becoming the 1st Woman to certify on the #2.5. I truly feel the principles of this program are going to help her out toward finally certifying on the #2.5 and getting that monkey off her back.

Also, John McCarter just recently certified on the Mash Monster Level 3 Gripper, a gripper that I have failed on about 10 times, so to get the feedback from him that I did was really exciting.

But perhaps the best feedback I have received so far comes from Chris Andrade. He has been a member of both my members-only site, The Grip Authority, and my on-line one-on-one coaching, Grip Task Force, so I am very familiar with some of his frustrations.

After working so closely with him for so many months, it was awesome to get this from him the other day:

This program is the sh*t my man. I’m MANHANDLING grippers that were busting my balls a few weeks ago. Did my week 4 workout today and then did an attempt on my #2.5 and was a few mm from closing it. MILES better than my last attempt a few weeks back. I gotta thank you again brother man.

Chris, it is AWESOME to hear it my man! That #2.5 will go down soon, brother.

Diesels, one thing you need to know about Chris. This dude is a worker. Believe me – he NEVER misses or blows off a workout and is willing to put in work in order to progress. He doesn’t let stuff bother him, or get in the way of his focus. He trains his ass off. I know, because he has been here and trained with me and he doesn’t just “try to close” grippers. He attacks them. It’s just a matter of time until he smashes that #2.5 and starts working toward the next gripper in his collection, and he’s got a lot of them!

Listen DIESELS, if you want to improve your grippers, get this program. That’s all there is to it.

Of all the different facets of Grip Training, you ask me about one WAY MORE than the others.

There’s no doubt about it that Gripper Training, developing a monstrous crushing grip, is the most popular type of Grip Training today.

And the one thing I have heard from you over the years is that you needed a program to guide you to your gripper training goals.

You’ve talked to be about your aspirations.

And you’ve talked to me about your frustrations.

You’ve talked to be about your Personal Records.

And you’ve talked to me about your Personal Plateaus.

You’ve told me about your successes, when everything you were doing was working.

And you’ve told me about your injuries, when what you were doing was doing more harm than good.

Well, about a year ago, I decided it was time to finally put together the Gripper Training Program to help YOU ALL attain your goals.

And now, I bring you Cadence Based Gripper Training.

This program is built upon 4 Core Concepts, each designed to help you continually make progress with your grippers, while also helping you stay injury free.

Every single set, rep and attempt you take in your gripper training must have a purpose. There must be a reason behind it. You should never do repetitions just to meet a quota or hit some rep count. With Cadence Based Gripper Training, the volume is limited to what is necessary. Nothing more, nothing less.

With Grippers, failure should never become the norm. Too many misses in gripper training creates serious problems. The hand does not get worked properly and glaring weaknesses develop. Before you know it, you are missing more and more. Cadence Based Training is designed to prevent misses and keep you closing grippers with authority.

Often, too much emphasis is placed on the Gripper attempt, when you are squeezing on the handles with the crushing hand. In reality, there are many other weaknesses to be aware of and address to fully maximize your crushing grip capabilities, and Cadence Based Training addresses these opportunities.

Stay Healthy at All Times

For a long time, it’s been clear to me that you have no problem putting the effort into your gripper training sessions. However, it seems that your focus is so intensely fixed on the training, that you often forget to take care of yourself as well. You can’t get stronger when you are hurt. This facet of the Cadence Based Gripper Training Program is designed to ensure that you stay healthy, putting together more quality workouts, and attaining your goals even faster.

I think this program is going to be a breath of fresh air for a lot of people. It is not built on the same principles that other programs have been built on.

Cadence Based Gripper Training is built on becoming stronger on grippers. Bottom Line.

This is the program you need. Grab it today for just $19, during the introductory period.

By eliminating these 2 mistakes in my Gripper Training, I was able to increase my CRUSH Strength by 15 between both hands…

Here is a quick post showing you the content that will be in the upcoming release, my Gripper DVD called, CRUSH! Total Gripper Domination. 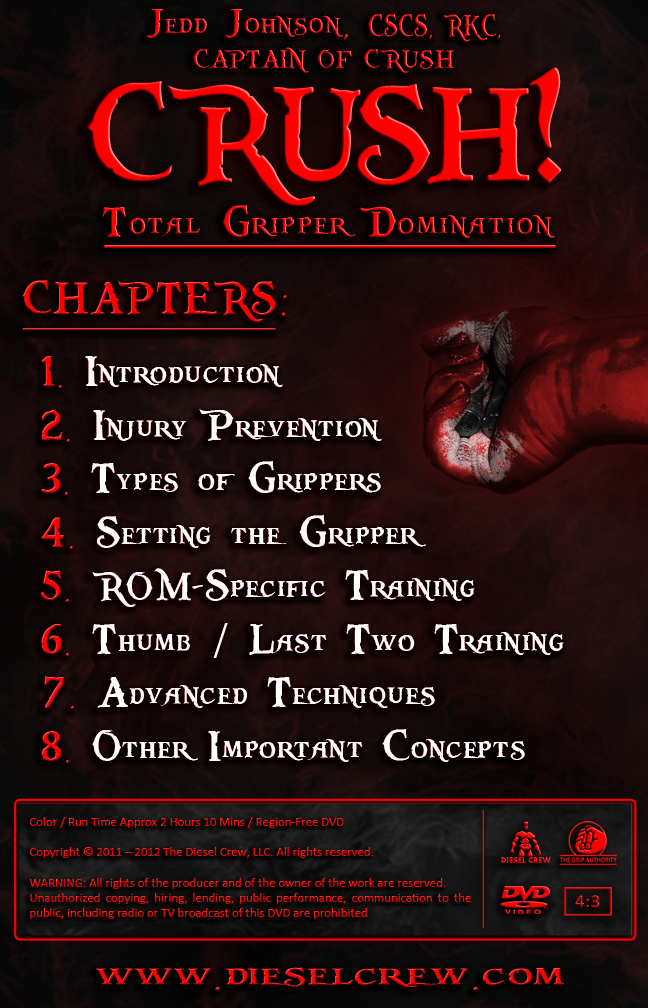 You will not believe the artwork on this DVD. It is the best that I have gotten so far. My man Rory is an ARTWORK MACHINE.