Ankle Mobility – Is it REALLY That Important?

There’s lots of reasons I respect Eric Cressey as a strength coach.

But the biggest reason is his ability to see deeper, and analyze possible solutions to problems, ASIDE FROM what everyone else sees.

I don’t like to bag on the Fitness Industry. I think that happens far too often.

The problem is not the industry itself, but rather, the bad apples spread throughout it that tend to spoil the proverbial bunch.

Every so often, a new buzz word or catch phrase comes out, and you can just see the Johnny-come-lately’s ready to to swoop in, pick up on the new terms, and use them like they thought of them.

In the video below, Eric Cressey touches on one of these such buzz words, “Ankle Mobility.”

He’s a bit more diplomatic than me in the way he covers this topic, as you’ll see when you watch the video, and he may even make you question your previosu thoughts about ankle mobility and how it influences movement patterns, such as the Squat.

Like Eric points out, there’s more to it than meets the eye.

This attention to detail is why I trust him so much.

This week, Cressey has dropped the price on one of his most popular products, the High Performance Handbook, by $50. 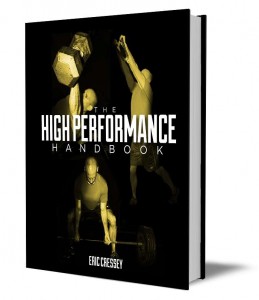 So for the next few days you can add this to your library at a much lower investment.

Eric Cressey is one of the best strength coaches in the world. If you’re a budding strength coach and you’re looking for someone to follow, Eric is the man, and High Performance Handbook is a great place to start.

Get it today. I can’t recommend it strongly enough.