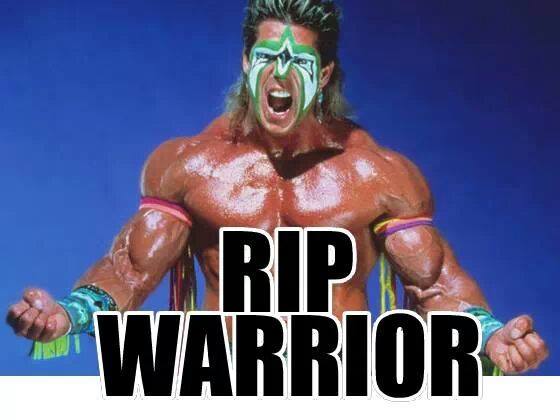 I woke today to find out that one of my childhood heroes, Ultimate Warrior, passed away.

He was 54. He has a wife and kids. It’s a terrible thing, and my thoughts and prayers go out to his family.

Crazy enough, he just reconciled with WWE last year, was featured in their latest video game, and was not only inducted into the Hall of Fame this past weekend, but also appeared on RAW this past Monday. Unfortunately, I totally fell asleep and did not see it. I will have to watch it on WWE Network.

He had also signed a multi-year deal to be an ambassador for the company, so the plans were to make him somewhat of a fixture within the company.

The picture posted above is one I got off Facebook.

I feel, he was in his best condition ever at the time of this picture, plus, he was rocking the serious mullet.

I have used the original picture (without the text) in a couple of my power points that present with at workshops and seminars.

Despite the fact that pro wrestling is a scripted event, you can still resonate with a character, and I definitely did with Ultimate Warrior.

I think the biggest thing about him that really connected with me was his INTENSITY.

Everything that the Ultimate Warrior did was INTENSE. He sprinted his ass to the ring, his interviews were crazed, emotional, and would pump you up, his training was balls to the walls throughout his career and even long after he was done as a full-time wrestler.

And even the way he cared about the fans and the way he strove to give them their money’s worth, whether in matches, or at autograph and meet-and-greet sessions, he did these things with an INTENSITY well beyond most other wrestlers.

To this day, that is how I approach everything I do, whether it is a training session, a business meeting, a lesson with my daughter, or writing a product. I put everything I’ve got into it – mind, heart, energy, blood, and soul.

Thank you Ultimate Warrior for the lessons you have taught me.

“Load the rocket ships with the fuel. Load it with the Warriors!”

All the best DIESELS.

This entry was posted on Wednesday, April 9th, 2014 at 12:36 pm and is filed under Uncategorized. You can follow any responses to this entry through the RSS 2.0 feed. Both comments and pings are currently closed.

One Response to “Rest in Peace Ultimate Warrior”