Lots of people love the idea of building a Big Bench Press, but have little idea how to go about doing it.

Often, the type of Bench Press training we learn about is what we learned in our High School Gyms, which are most likely recycled information that the coach learned when he was in High School and has never changed one single bit. It often ends of becoming a vicious cycle of bad, out-dated information.

My suggestion for people who want to bring up their Bench is to find someone who actually is a Powerlifter and is seeing some success in their training. When you train with someone who is successful in the Big Three Lifts (Bench Press, Squat, and Deadlift), Strength becomes Contagious. Just by lifting with them, you get stronger, and all awhile learn the proper way to train.

Last Friday, I had someone visit who has done just what I am suggesting. He went from having very little structure in his training a few years ago, to following one of the most popular Powerlifting Programs that is out there. As a result, he has seen impressive gains from the new-found structure and is enjoying the design of the program and the increased numbers, for sure.

This lifter is Josh McIntyre. I first met Josh through the Diesel Crew website in January of 2011 when I started the Weekly Grip Strength Challenges. Josh won many of these challenges during the year and has gone on to perform lots of Elite-Lever Grip Strength Feats since then, although these days his primary focus is Powerlifting with a little Strongman and Grip thrown in, a great mixture for developing incredible strength.

We hit an awesome workout this past Friday, about 2 hours and 15 minutes of Upper Body Training and then about an hour and a half of Grip Training, with a little break in between for a short interview.

Below is the video, which contains the entire session.

I asked Josh to send in a little write-up about himself so you could get to know him a bit better. I think you will also see that once you get some programming into your routine, you can expect to see some increased strength levels across the board. Here you go. 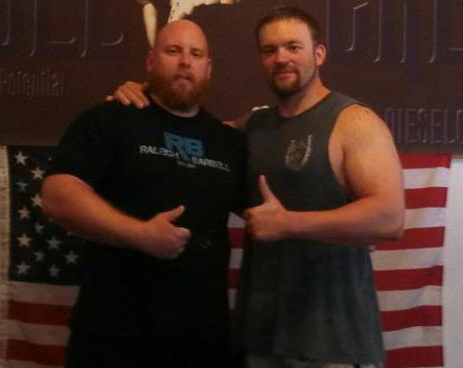 Jedd: Who the hell are you and how did you end up getting into Powerlifting?

Thanks Jedd for having me up to your place. My name is Josh McIntyre, I’m 32 and have been lifting off and on since I was 14, but with goals in mind since 2010 and most seriously since 2012. I’ve competed in both Powerlifting and Strongman. My best lifts to date are a 565 squat (raw w/ wraps,) a 390 raw bench and a 635 raw deadlift (no belt) but I’m seeing now that I’m capable of a lot more.

I never did anything more than a set of curls and some push up’s right after highschool. I thought I was strong back then. It’s amazing to look back at pictures and see a guy who thought he was the man. In 2007, I moved to NC from NJ and found myself with a spare room to fill. So I assembled my rusty old H.S. weight bench and got some cheap standard plates from craigslist ads and used sporting goods stores.

Around the same time I spent a lot of time on Youtube looking for workout routines. I found your channel and was floored by the feats I was witnessing. I had a “monkey see, monkey do” mentality like many others, and trained until I could replicate whatever it was that I was training for, like a 5 dimes pinch (have still to get 6 without a pipe through them,) pinching two 45’s, levering a 45# plate (still sloppy,) hubbing a 45# plate, closing an Ironmind #3 etc etc.

I also started to train the powerlifts. I use the term “train” loosely here because I had no idea what the hell I was doing and ended up with a lot of shoulder pain. For a while, since I had no squat rack and it hurt my shoulders to bench a lot, I focused primarily on the DEADLIFT. To this day, it’s still my best and favorite lift. (long arms)

Once I scored a power rack off of craigslist for $100, it was on from there. I read up a bunch on rehab and prehab for shoulders here on DieselCrew.com and Elitefts. I watched a lot of video’s and inched my DL up over 500 in 2009.

Jedd: Tell us About Your Early Competition Days

I competed in my first powerlifting meet in 2010 in the APA. I entered Deadlift only, weighed in around 235 and competed in the 242’s. I opened at 505, went 565 for my second and 585 for my third. Unfortunately they called me for hitching (rightfully so) and I was credited only for my opener. I learned a lot that day and I was hooked!

Since then I’ve competed in 6 powerlifting meets and 1 strongman contest. I’ve learned so much from each one. I really enjoyed the strongman contest but PL is where my passion is. I’ve also trained with a lot of brutally strong PL competitors I’ve met at meets and gained a lot of strength and knowledge from them.

Jedd: When I first learned of you, you were training mostly at your house and from time to time in a gym where they wouldn’t even let you bring in chalk. These days, I have seen you have been training at Raleigh Barbell.

Since March of this year, I began training with a PL team at Raleigh Barbell. I’ve seen my best gains ever just in the last 5 months since training there. We trained 2 cycles of Brandon Lilly’s Cube Method with some success. The guys are great, supportive, serious and very goal motivated. If I squat high, they let me know. If my back started to round a little there, or my ass rises off the bench slightly, they’re right there to correct it for me. Having an extra set of eyes is really helpful when you can’t see where you’re screwing up. 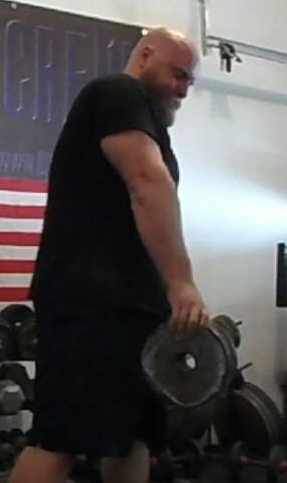 As far as the gym, Raleigh Barbell is an 864 square foot training facility located in the heart of downtown Raleigh which is owned and operated by Elite Strength and Wellness Coach Jackson Williams. He’s been a great coach and he’s strong as hell! I’ve seen him pull 650 raw like it was 315. Training with guys stronger than me has been exactly what I was missing. Coach Jackson and Teammates Mason, Hunter, Chris, Keven and Justus are great lifters and training partners, and I’m lucky to be training along side of them. For more info on Raleigh Barbell or to contact Jackson, check out Raleighbarbell.com or hit him up on the Raleigh Barbell facebook page, if you’re on the book of faces.

Recently we’ve started a 10 week training template written by our coach leading up to a PL meet in November in Richmond, VA followed by a Charity Push/Pull the following weekend that I’ve done for the past 3 years.

Jedd: Josh, I’ve gotten some questions asking why we chose the exercises we did during our workout and what exactly the bands are for. Could you explain these points please?

The bench workout you and I did was from our Raleigh Barbell week 2 speed bench. It focused on practicing the bench press movement over and over by doing 8 sets of 2 as fast as we could WITH GOOD FORM. We incorporated band tension to make the lockout more difficult. That forced us to generate momentum from the start to get us through the increasing resistance. We also added volume by going for max reps up to but NOT including failure. We don’t miss training lifts at Raleigh Barbell. We only took another rep if it was there. The rest of the bench day was higher volume accessory stuff, o/h press, shoulders, rows, hammer curls, tri’s, all for hypertrophy.

Jedd: Now that you are several years into serious training, maybe you could talk a bit about major lessons you have learned, pitfalls you have run into along the way, mistakes you’ve made, etc?

I’ve seen up’s and down’s in my training but the more experience I got the more I realized the anecdote “it’s a marathon, not a sprint” is dead on. Also, enjoying the journey has been key for me. I lift ’cause I love it, that makes it easy to commit to. I see lifters so focused on their goal that they suffer through and end up hating their training. It’s ok to like what you do, it makes you easier to be around too.

Some of the mistakes in my own training over the years have been:

1. Sticking with a routine even after I stall while using it. You can’t keep doing the same thing and expect to get a different result. My numbers were up and down, up and down for far too long

2. Not doing any kind of accessory work to bring up weak areas

3. Thinking one way was right and ALL other ways were wrong

4. Waiting until I thought I was “good enough” to enter a PL meet. I wish I had done it sooner. Your entire mentality toward training changes after a competition. And the friends I’ve made and the things I’ve learned have been valuable to me as a lifter and a competitor. Don’t wait, sign up today. It’s so much fun and you’ll walk away with more than you came with

5. Finding reliable training partners. More easily said than done. If you have an opportunity to join a PL gym, or a CF gym or a Strongman crew DO IT 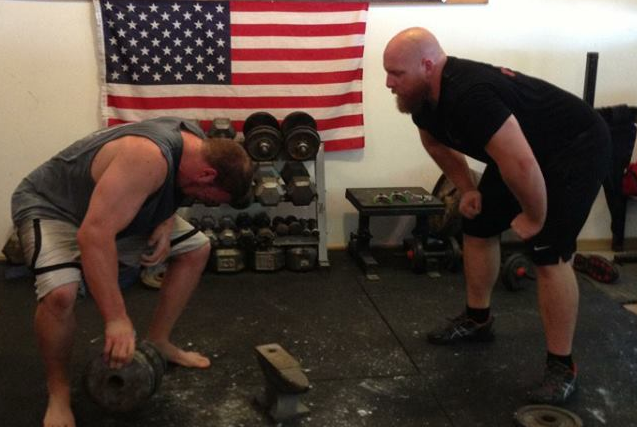 Jedd: Josh, great having you up here. Come back again when you make a trip up this way. I want to see you get the 6-10’s Pinch sometime soon.

Again, thank you Jedd for having me up to train. The grip feats I witnessed and failed at were humbling and motivating. I was smashed when I left your gym but mentally I was rejuvenated with the idea of grip training. I have an entirely new respect and appreciation for Grip sport and its competitors. I look forward to meeting up again soon!

I got some feedback that the videos were hard to watch in the Playlist, and that you would like them separated out, so here you go…

Axle Rows for Back and Grip Strength

Hammer Curls for Size and Strength

DIESELS – If you have any other questions about the training we did in the videos, leave a comment and I will do a follow up article to answer them.