This past weekend was “Nationals,” the North American Grip Sport Championship. 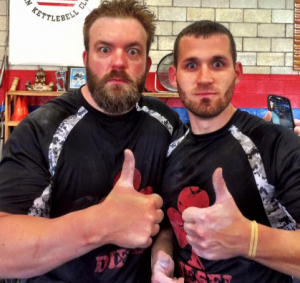 If you’re not familiar, the way Nationals works is you must qualify via 1 of several ways.

One way is based on your finish in a sanctioned contest. Generally, top 3 in your class will get you qualified.

Another way is by breaking a long-standing record, such as a bodyweight record for certain lifts, or by breaking a World Record in other lifts.

Still, another way is to certify on highly recognized 3rd party feats of strength, such as the IronMind #3 Gripper or Red Nail.

Finally, if you can qualify one year, and you go to the NAGS Championship and compete, then you’ll be qualified for the next year.

Various contests take place all over the United States and Canada throughout the year, and competitors qualify at every single contest, for the chance to compete at Nationals, the biggest and most prestigious competition all year long.

In 2014, I was lucky enough to win the overall competition. The events were good for me, and I trained them hard, and it resulted in a strong win over top competition.

This year, the events were a bit different. They were events that I was OK in, but the mix wasn’t anywhere near as strong for me in 2014, so I knew I had my work cut out for me.

Going in, I knew my main competition would be Andrew Durniat and Kody Burns. Andrew and I have been battling it out in Grip Sport since 2008, and Kody has proven to be extremely talented in all forms of grip in the last few years.

I knew going in that Grippers would be strong for me. I have been closing my 170-rated Tetting 7 on a regular basis in training. I’ve done it before, but more sporadically.

Last year, I managed a 155 Left and a 170 Right. This year, I PR’d on both hands with a 160 Left and a 180 Right. I believe this makes me only the third or fourth person to ever close a Top Row gripper. There are three rows of grippers on the table, and 180 begins the top row. It’s a strange feeling being able to say that, as I have never been crazy strong on grippers.

What was once my best event that would be a sure overall win for me has turned into a nightmare. Training for this event went straight into the toilet mid-way through April for unknown reasons. In April, I had lifted an all-time training PR of 258lbs and broke 260 off the ground. Then, the next workout it was like I had no idea what I was doing.

I was able to get 235 fairly easy on my 2nd attempt, but 245 laughed in my face in my 3rd and 4th attempts. It would have been really nice to get those points, but I ended up just an inch or so shy on my 3rd lift and less than an inch on my 4th lift.

Kody Burns hit a successful lift of 254. This was the first time I’ve been beaten on 2 Hand Pinch in a contest since 2005, when Chad Woodall beat me at the Global Grip Challenge.

In contrast from Pinch, my Axle had been super strong throughout April and May. I was lifting 393 for multiple singles and some doubles in May. I just recently hit my first ever lifts of 400lbs on the Axle at the New York Grip Throwdown in April, so I figured this year would be the year I finally got 400lbs in competition at Nationals as well.

Unfortunately, I didn’t quite get legal lifts. I got them very close to Lockout, but didn’t have enough control over the bar to get good calls. Close but no cigar.

The Wrist Roller this year involved an elevating lift arm and a sled drag. I feel like I prepared very well for this event, as I cut my time down to a third of what it was in March when I tried it at Andrew’s gym in March. I got a little over 10 seconds.

Going into the Medley, I was sitting in 2nd Place. I didn’t know how far behind I was of the Leader, Kody Burns, though. I knew I beat him in Grippers, and that he had beaten me in Pinch, Axle, and Wrist Roller, so for all I knew I was down 3 to 5 points.

I didn’t worry about the deficit I was facing. Instead, I just focused on seeing each one of the implements coming up when it was my turn to make my run.

The way the Medley worked was there were two rows of 12 implements. One row was lighter, one row was heavier. If you completed the lighter implement, you got half a point. If you got the heavier implement, you got 1 point. You could try the harder one, and if you missed, you could go do the lighter one, but you would only get points for the heavier variation. So, the best possible score was 12 points.

I honestly thought I was going to Stack the whole Medley, except for the Sledge Lever to the Face. I figured I would run out of time to even try it, so my goal was 11 points.

To my surprise, the Saxon Bar loaded to 205lbs was EXTREMELY tough. The finish was very slick and chalk would not stick to it, so NOBODY ended up getting it.

Also, the Sorinex Anvil proved too heavy for me. I got it an inch off the floor, but nowhere near lockout. In both cases of the Saxon Bar and the Anvil, I had to go to the lighter versions and settle for half a point each.

Additionally, the adrenaline must have given me a kick, because I shot through the entire Medley and had time to try the Hammer Lever, and I completed it. So, that gave me 10 of the 1-point feats and 2 of the half-point feats, for a total of 11 points, exactly the total that I wanted.

The scores must have been closer that I anticipated, because the 11 points was enough to allow me to inch my way past Kody Burns in the Final Standings, and I was elated to learn that I had won the Overall competition.

With this victory, it makes my 3rd consecutive Division Champion and 2nd consecutive Overall Champion. I honestly couldn’t believe it.

I am beyond thankful to God for my health and my ability to stay focused. In past contests, my disappointing finishes in the Pinch and Axle would have resulted in a great deal of anger, but this year I was able to remain focused.

I am thankful to my wife, Delraine, and my family for supporting me in my endeavors in Grip Sport.

I am so thankful to have a great partner like Luke Raymond who trains his butt off every bit as hard as I do and truly pushes me to be better.

I thank my other training partner, Mark Gannon, who pushes me hard on Friday mornings and lets me work a little thick bar into the sessions, even though it eats up some time and makes me grumpy to train with.

I sent a note to my parents who have supported me in athletics since I was a child and these days listen to my Grip stories with the same attention they used to listen to my baseball and basketball reports.

I sent out thanks to my massage therapist, Rachelle and my chiropractor, Dr. Napp for helping to keep me healthy throughout the year and especially the last few weeks.

And I want to thank all of you in the Diesel Universe for all the continued support over the years.

I couldn’t have done this without any of you. Thank you.

Many have asked me what’s next for me. The primary goal is to lean up a bit. I have already made some modifications to my diet and added back in morning and lunch-time cardio sessions. If you’re interested in taking off a few lbs, check out Napalm Fat Burning. That program covers exactly the kind of stuff I’ll be doing in the next few weeks leading up to my August family vacation to the beach!

This entry was posted on Wednesday, June 10th, 2015 at 9:35 am and is filed under Grip Sport, grip strength, grip strength competition contest, Uncategorized. You can follow any responses to this entry through the RSS 2.0 feed. Both comments and pings are currently closed.