A few weeks ago, I posted that I wanted to start doing a formal recognition for the people who we all admire for their dedication to the craft of strength, health and fitness into their upper years.

This recognition, called Iron Masters, would be for anyone over 40 who trains with the iron, maintains a healthy lifestyle, and is an example that we can all look up to. If you’d like to read more about this, you can check out my original post on Iron Masters, here = > Iron Masters.
CHECK OUT THE REST OF THIS KILLER POST AFTER THE JUMP
I am proud to post our first nomination, coming from Mike Eckrote from Wayne, NJ. Mike writes:

The person who I wish to tell you about is the hardest working person I had ever met in my life. His morals and ethics will carry with me for the rest of my life.

This person is my father.

I would say for a solid 30 years of living in Wayne, NJ, he trained consistently and hard, every morning waking up at 4:00 to train in the basement.

In March of 2005, he began running again. Not just a simple jog though. He would run down a hill to a nearby lake, around the lake and back up the same hill every morning with 15 lb dumbbells in each hand.

He began doing this when he was 52 and continued right up until the end. In October of 2009 he was diagnosed with pancreatic cancer. Although this was a shock it didn’t stop him.

He pretty much said “f*ck cancer” and decided not to let it affect the way he spent the rest of his life.

He continued to run all the way up until his passing away in December, on the cold, early mornings when everyone else was sound asleep.

Aside from being a great man and totally hilarious he was a serious worker and downright kicked ass. He will always be remembered.

Mike also sent me this picture of his dad and him at the 2008 Rehobeth Beach National Baseball Tournament. 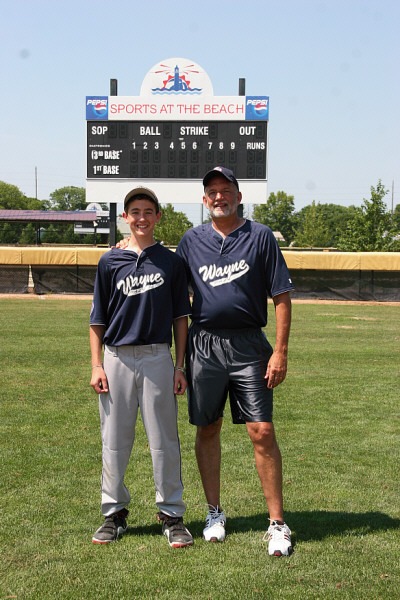 Thanks for sending this in, Mike. Not only is it special because it is the first nomination we received, but it is special with me because my dad and I have spent countless hours together on the baseball field.

Send in Your Nominations

If you have someone that you would like to salute for Iron Masters, please send a short write-up in to me at jedd(dot)diesel(at)gmail(dot)com. We’re looking for strength and fitness trainees who don’t let age get in the way of their goals and keep on hitting it from the age of 40 and up!

This entry was posted on Tuesday, June 29th, 2010 at 8:10 pm and is filed under your daily inspiration. You can follow any responses to this entry through the RSS 2.0 feed. Both comments and pings are currently closed.