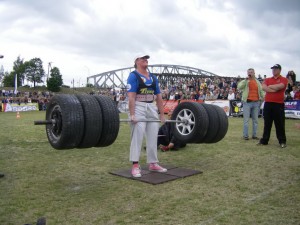 A few months back, I was contacted by woman looking for coaching for Grip Sport. While this in itself is awesome, I was even more impressed to find out that it was none other than successful Strongwoman and Highlander Games competitor, as well as Elite FTS-sponsored athlete, Amy Wattles.

Over the coming weeks and months, it was my pleasure to coach her in preparation for Grip Sport Nationals 2012.

After setting a new world record in the women’s division, I asked her if she could take the time for a short interview, and she obliged. If YOU have any additional questions for Amy, leave them in the comment box and I will get them to her. Enjoy the interview. -Jedd-

Jedd: Amy, tell us a little bit about your athletic background.

Amy: I am currently a nationally ranked strongwoman competitor, compete in highland games and as of this past week now compete in Grip Sport.

My athletic background growing up was pretty typical and there was nothing remarkable about it except I was above average in the sports I played. At that time girls didn’t really go into the weight room much and if they did, I was first in line to make fun of them.

There weren’t many strength athletes or opportunities available to me at that time. Or perhaps it’s better to say, I wasn’t aware of those opportunities. This was at a time when the internet didn’t exist so accessing strength training opportunities and resources was far more difficult than it currently is.

I’ve always been athletic and played softball and volleyball as a child all the way through high school. I actually stopped playing volleyball my final year in high school to do a few beauty pageants. In hindsight that’s hilarious. I’m not sure what I was even thinking but it was a good time. Truth be told, I did it to try something different.

In one of the pageants, I was on stage giving what was supposed to be a heart filled, moving speech. In the middle of my speech I burst out laughing and couldn’t stop. I was hunched over, slapping myself on my knee just laughing and laughing. The more I tried to contain myself, the harder I would laugh. I learned pretty quickly that I was probably better suited for other activities. In the end, a girl can’t hide who she is no matter how much make up, big hair and fancy dresses she has.

Jedd: How did you get involved in strength sports?

Amy: When I started college, I was enrolled in a few weight lifting classes and loved the exposure to the weight room. I walked into the weight room being able to squat 315 raw. It was at that point my husband Matt convinced me that I was pretty strong. I took his word for it, I had nothing else to compare it to.

In the back of my mind I thought 315 wasn’t too much, 405 would have been impressive. It’s that mind set that still sticks with me. I haven’t decided if it’s a positive or negative influence on my training.

There have only been a handful of times in my career when I felt really good about a lift or performance. There’s always a voice in the back of my head telling me that a lift wasn’t big enough, I could have been quicker, someone else could have done something I wasn’t able to, etc.

I continued to train sporadically and was always very interested in strongman. I would watch World’s Strongest Woman on television and knew that was something I could do. After about 10 years of sporadic training and having the desire to do strongman, I finally had the opportunity. Corey St. Clair was a local pro strongman and his mother was my principal at the school I was teaching at. She was training for a local strongman competition. She convinced me to come out and train with them. I was actually pregnant at the time with my daughter, so three months after she was born I started training. Once she was born, I dragged her saucer along and propped her up in it on the sidewalk so I could train.

As a mother of two young kids at the time, training quickly became “me” time. It was something that allowed me to get away from all of the demands and expectations, hang out with my friends, socialize and unleash the fury of all the things a working mother of two could possibly be feeling. Training was my sanity and helped me stay connected with who I am.

There are several strongwoman competitors who started competing after the birth of their children. I think there’s a common thread there. We were looking for a way to maintain our own identities aside from motherhood and realized how quickly our lives became about meeting other people’s needs. Training provided the opportunity for us to stay true to who we are and not fall into that typical “mom” role.

Jedd: What titles/championships have you won as a strength athlete?

Amy: Really and truly the one that I am the most proud of is my performance at Grip Nationals this past week. Grip has been something I’ve wanted to do for a long time and throughout my strongman training I always drew a line in the sand to not use straps, to train my grip consistently and work with the axle to the greatest extent possible on all lifts in training. There was a point when using a standard bar was far more difficult than the axle. My performance this last week was a culmination of many years of strongman training.

In 2010 I won the North American Highlander Assoc (NAHA) national championship which is a mixture of highland games and strongman events. I have competed in way too many to count local and regional strongman competitions, always doing exceptionally well. In 2008 I competed in the World Strongwoman Championship and came in 6th place.

Jedd: You recently competed in your first grip contest. How did you find out about Grip Sport? 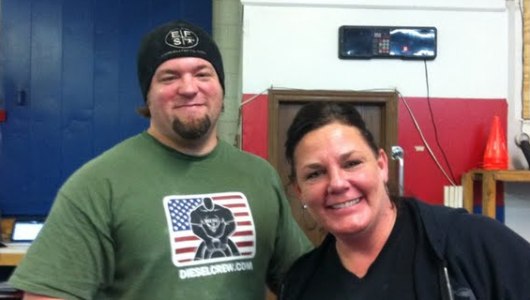 Amy and I After Nationals

I was checking out a forum one day and happened to see Andrew Durniat’s post about grip nationals. I didn’t even know it existed. I found out about Jedd and that quickly became a positive and educational experience with my own training.

Jedd: What did you think about Grip going in? Were you surprised about anything as you trained for the contest?

Amy: Going in to grip training, I under estimated how taxing the training was on my body. I figured it was pretty basic stuff and with strongman as my typical training, I didn’t think it would be too difficult. The grip training in conjunction with my regular strength training was breaking me down pretty badly, especially once I switched to more high volume training. There were several times that Jedd and I had to restructure my training in order to accommodate the stress and fatigue my body was feeling. I was also seeing some nice carry over on the overhead pressing which I did not anticipate.

Jedd: What did you learn from your first contest? Big take-aways?

Amy: Going in to my first contest, I was counting on people showing me the ropes and would be patient explaining all of the rules to me. I was right. The grip competitors are on par with highland games competitors, very supportive and patient to the newbie. I am so grateful for all of their help.

During the competition I wasn’t sure of some of the rules and regulations. I didn’t realize you could go sumo on the deadlift. Not that I use sumo, but it was something that never really crossed my mind.

In hindsight I needed to trust my own knowledge and experience as a lifter. I’ve been involved in strength sports long enough that I know what works for me and what doesn’t. My set up on the axle was TERRIBLE! I typically take a much wider stance with my arms and legs. In my video you will see my arms pulling against my shins. I wasn’t better prepared for hand placement on the axle and I was concerned about not fully understanding the rules. I was fortunate that my bad set up still allowed me to pull a decent amount of weight.

That voice inside me also tells me that I could have pulled more had I followed the technicalities of a good lift and what works for me as a lifter. I also under estimated my own knowledge and experience on the 2hp with the chalk. Again, I know what works for me but I ignored that knowledge and didn’t do as well as I had expected.

Another big take away I had was how awesome the other competitors were. I wasn’t sure what to expect going in but people quickly made me feel at home and at ease. Grip proved to be a very positive experience.

Jedd: What advice could you give to other men and women interested in competing in Grip?

Amy: The best piece of advice I could give someone is to hook up with someone who knows grip. In my case that was Jedd. Researching and understanding all of the different events and implements takes time. I didn’t have that time, so I went to the expert to help me through that learning curve. There are many excellent resources out there and connecting with other competitors is essential. The Grip Board was very helpful for me along with the billions of resources and videos Jedd has out there. His coaching was worth the investment and ensured that I could maximize my performance in the time I had available to me to prepare.

My next piece of advice is to just get out there and try it. There is never the perfect time for a competition or event. Like strongman and highland games, the best learning opportunities come when you actually compete. Nobody is going to point and laugh at you (unless you really deserve it) and will help any competitor though the uncertainty and inexperience. Once that first competition is over, personal reflection and goal setting become much easier for the next competition.

Jedd: Amy, thanks for taking the time out of your schedule to do the interview with me. It was great working with you and watching you do so well, and I hope to see you move your numbers up even further very soon.

If you would like to learn more about Amy and her experience with Grip Sport, or if you’d like to follow her on Elite, check out the following links:

To discuss Coaching Programs with me, email me at jedd dot diesel at gmail.com

This entry was posted on Monday, June 18th, 2012 at 11:11 am and is filed under Grip Sport, grip strength, grip strength competition contest. You can follow any responses to this entry through the RSS 2.0 feed. Both comments and pings are currently closed.