This is a guest article by Brent Barbe. Several months ago, I put up a post talking about how Brent had planned to travel to Iceland to lift the famous Husafell stone. He has since gone to Iceland and returned. Unfortunately, the stone was frozen to the ground and he could not manage the lift, but he was able to see some parts of the world many of us only dream about, and he was able to develop strength in ways that otherwise he might not have tried.

Brent has been a member of The Grip Authority since its inception in January 2010 and has made tremendous gains in his Grip Strength over the last couple of years. As I have said before, Brent made tremendous gains on his Two Hands Pinch during 2010, the like of which for a seasoned veteran have been nearly unparalleled.

One thing you have to know about Brent is that he doesn’t just do movements in his training because a book or article told him to. He thinks about his training and works to find solutions and so far has been very successful in doing so. Check out below how Brent trained his lower arms in order to lift the Husafell stone… 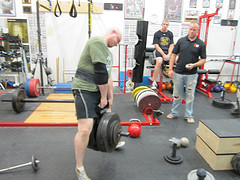 When I first started training for the trip to Iceland I tried to get in contact with as many people as I could who had already lifted the stone. One of the things they emphasized to me was, that it was extremely smooth and hard to hang on to. After a few sessions with natural stones, I found this to be true and started changing my grip training to bring up my wrist strength to help me on the lift. 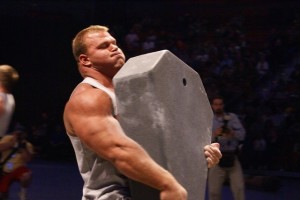 The first thing I did was make wrist curls the first exercise I did during every wrist workout. That way, I was sure to get the work in and be fresh while I did it. I rotated through a bunch of exercises but found that the four following variations were giving me the best gains, and were the easiest to stick to.

The first exercise is wrist curls with a climber curl by Chris Rice. It has a slight angle to the bar, which allows you to hold the wrist at a more natural angle. Curls on the climber curl probably made up about 1/3 of my wrist curls since they were effective, easy to recover from, and convenient. I would just leave the bar loaded up and could hit it without having to set anything up or clear any space.

An exercise I worked in a good bit as a secondary exercise is a thumbless “cupping” deadlift on a thick handled dumbbell. I saw this in a Devon Larratt arm wresting video a while ago. These were good for when I had something else I was working on at the same time as my grip training. I could work on whatever, walk to the platform and make a lift, and then get back to what I was doing. Sometimes tricks like that can make it easier to get the grip training in during a busy schedule.

The FBBC Crusher is one of my favorite training tools. It’s a revolving handle that attaches to a loading pin. It’s the fastest handle I’ve ever used. I use it for normal thick handle deadlifts but, I also like it for wrist curls. With the majority of the wrist curl exercises you need to bend over or lean. I have two damaged discs in my lower back that can make that uncomfortable at times. With the Crusher curls I am able to get my wrist work in while standing up.

All of the above exercises hit the wrist but, have minimal finger involvement. I started to do plate wrist curls to address this. While the plate curls did hit the finger, it’s a really big jump from a 25# to a 35#. So, I started using block weights. Jedd had featured block weight wrist curls on The Grip Authority but I never really gave them a try. After a couple of workouts I can say I’m hooked. They hit the wrist, thumb, and fingers in a completely unique way.

So, that’s the four exercises that [made up the bulk of my training]. I [made good gains] by switching things up on a regular basis, and, I [did not have] any grip issues during any of my stone training. Hopefully, you can take something from this and use it in your training to make some progress of your own.

Brent, thanks for the article. I am sure that many people who have tried to lift and carry the Husafell stone have been plenty strong enough in the back and legs to pick it up, but holding it aloft and carrying it of course very dependent on Grip Strength. Hopefully your article will help others train to be successful in doing so, and I hope the next time you go to Iceland, it is a bit better weather! Thanks again for the article and videos!

Some facts about the Husafell Stone, from SlatersHardware.com:

This entry was posted on Wednesday, June 15th, 2011 at 9:12 am and is filed under feats of strength, grip hand forearm training for sports, grip strength, home made strength equipment, how to improve grip strength, stone lifting. You can follow any responses to this entry through the RSS 2.0 feed. Both comments and pings are currently closed.