Recently I set out to hit a big mark on repetitions with the 50-lb Blob. The video of this feat is below, but before we get to that I want to make sure that everyone knows exactly what I am talking about.

Origin of the Blob

The Blob was named by Richard Sorin, who is one of the modern pioneers of Grip training. Sorin had a 100-lb York Dumbbell that broke and instead of throwing it out, he decided to try to lift it by pinching it at the top. After much trying, he was finally able to lift this block weight, or broken dumbbell head, and began calling it the Blob. This test of strength would later gain popularity as awareness of Grip Training grew.

Why is the Blob so Challenging to Lift?

The Blob is more difficult to lift that a hex-shaped block weight because it flares out on the sides. Because of this flaring slope, your hand is positioned in a more open position, adding to the challenge.

What kind of Blobs are there?

There are many kinds of Blobs and it can be tough to sort them all out. 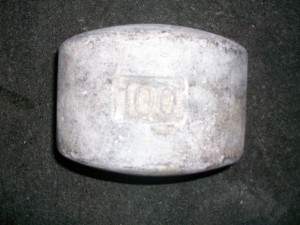 Fatman Blobs – These are the original style heads of York Dumbbells. They bulge out on both sides and are quite a bit tougher to lift than other Blobs. Richard Sorin is the first person I ever heard of who called the original Yorks by the name Fatman. In addition to having rounder sides, most of these Blobs are also 1 to 4 pounds heavy. 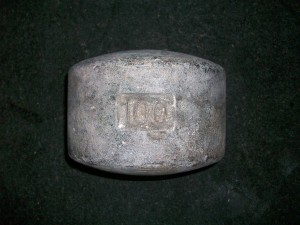 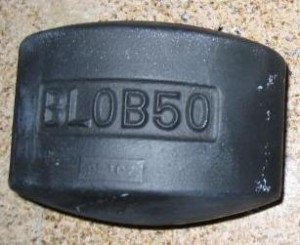 Blob50 – Gordon Vizecky got a cast produced of one of the newer style Yorks in 2005 once York stopped making them. From time to time he gets more Blob50’s made at a foundry near his home in Minnesota. These Blobs vary in difficulty depending mostly on the texture. A rougher texture generally makes the Blob easier to lift. There is little data available to show how the weight of these Blobs vary. 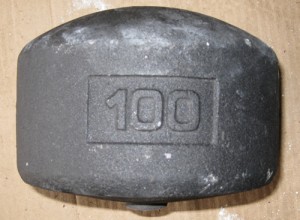 Legacy Blobs – This is the most recent style of dumbbell produced by the York Barbell company. They have one side that is very straight making them very easy to lift when the thumb is placed on that side. Anecdotal evidence suggests that if they are lifted “backwards,” with the thumb on the rounder side, the challenge returns. 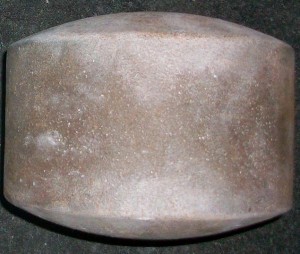 Fatman Clones – A fellow named Chris from the Baltimore area made a cast from a Fatman style Blob and produced replicas of the original style Blob. Chris sent me one of these gems and it is by far the heaviest and most difficult Blob of any design I have tried to lift. It is wide like a flatman, shoots out on both sides, and can annoy you like the hall monitor in High School. I love my clone and have another one on the way. Thanks Chris for going to all the trouble of producing these!!!

So, there you go.

There are many types of Blobs out there. As long as they are not of the Legacy variety, they are considered a legitimate challenge to lift and something to be proud of.

I got my first Blob from Rick Walker in 2003. Blessed with large hands and great thumb R.O.M., I was able to lift it and take a few steps with it the first time I saw it.

I always include plenty of Blob work in my training, because block weight training is so great for hand strength development, whether it’s Blob holds for time, Double Blob Farmer’s Walk, Blob Plus Weight, Blob by the Face, or Blob Lift for Reps.

As I said at the beginning of this post, I recently tried to go for as many full deadlifts with the Blob as possible. By full deadlift, I am talking about standing completely erect with the hips locked and the blob up near my waist area.

I set out for a goal of 40 Blob lifts in however much time that I needed to accomplish it. Unfortunately I lost count as I was lifting and only got 39, but what a tremendous workout. Man, was I pissed when I realized I miss-counted, though…

Here’s the video of my 39 reps in about 6 minutes.

Several things helped me get so many reps in about 6 minutes time:

Multiple reps without re-gripping – By using a touch-and-go approach, I was able to rep out 3 or more reps in the beginning when my hands were still fresh. I was able to sneak in more reps in less time this way and as a result hand fewer irritation in my thumb skin.

Tilting – It is way easier to get the reps in if you tilt the blob prior to lifting it. This puts more of the emphasis on the fingers and wrist while taking some off of the thumb, requiring more time to wear the thumbs out.

If you have any questions about Blob lifting, please let me know. You can do this my leaving a comment below. Don’t forget to check back, though! I always try to respond to comments!

This entry was posted on Monday, November 16th, 2009 at 10:41 pm and is filed under grip strength blob, how to improve grip strength. You can follow any responses to this entry through the RSS 2.0 feed. Both comments and pings are currently closed.