Who Will Be the United States Grip Champion?

This weekend is the 2009 United States Grip Strength Championship.

Athletes from all over the country will be traveling to Bradford County Pennsylvania to test themselves in 5 grueling hand, finger, thumb and wrist strength events to see who is the United States Champion in 2009.

Here are the events:

Grippers – Parallel set. All grippers have been calibrated and range from 127 lbs (BBSE) and 209 lbs (IM#4).
Two Hands Pinch – Variety of widths used to accomodate hand size. Will the record fall?
Axle Deadlift – Double Overhand Deadlift with the IM Axle. Will a new record be lifted?
Weaver Stick (Rear) – Weight will be hung from a stick and lifted parallel to the floor
Medley Menagerie – 20+ mystery implements will be lifted, loaded, dragged and destroyed.

Last year’s champion, Chad Woodall will not make it this year due to other commitments he has taken on, so that means a new champion will be crowned.

This year, I will make every attempt possible to stream the video on Ustream. Please sign up for our Grip Strength newsletter now. When I have the link for the Ustream, I will send the link out to you so you can tune in!

Who WIll Win? Let the debating begin!

Will past success bring about victory this weekend? Of the field the following have finished first place in one or more grip competitions this year:

Will home field advantage have anything to do with the final standings?

I have the luxury of training on the grippers that will be used in the competition, but many other people have squeezed them as well, including Thornton, Barbe, Goodfellow, Rinderle, Eaton, and Snyder. Will having the chance to have squeezed the grippers before yield anough advantage for the handful that have been here before to edge out the newcomers?

What effect will travel have on the competitors?

The people traveling the furthest for the contest will be Robert Alva and Mike Corlett, both coming from California. Robert will be on the east coast living it up in NYC on vacation for several days before coming to PA to rest and mentally prepare for the showdown. Will the travel wear these guys out? Will the respite rejuvenate Alva, allowing him to be the contest dark horse?

Is strategy going to be a factor in the way the contest pans out?

Standardized equipment WILL be used for the Two Hands Pinch and the Axle Deadlift. Will anyone break records? Will the allure of owning a new record cause athletes to take too big of jumps in the rising bar events with failures causing their scores to significantly drop? I have had my my eyes set on the Two Hands Pinch record for several years. 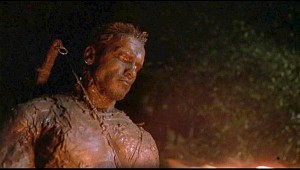 What role will guerrilla warfare play in the competition?

Several of the athletes are coming into town the night before. During the process of putting on the addition I also installed several traps for visiting grip athletes to gt injured on. Many past GGC participants remember the trap I set for Woodall two years ago that he evaded until the contest was already through. You can bet I will be pulling out all the stops at this one, even if it means I have to cover myself in mud and bushwhack people for the victory.

What event will have the biggest effect in deciding the winner

With the exception of the Weaver Stick lift, all of the events commonly appear in grip contests. However, the medley will feature lifts and objects that have NEVER been performed in Grip contest medleys. Of the 20+ implements, there will be 4 stations. If all the feats at the station are completed, the athlete can go for a bonus feat for extra points. This has never been done in any competition I have attended nor do I remember it in any of the dozens of accounts I have read. This one just may be the event that decides the overall winner of the show, folks!

The equipment I have is pretty remarkable. This week I shot a video of my block weight collection and it is something to behold.

If you’ve ever been to a grip contest, you know that once the dust settles from the competition, the feats of strength that take place afterward are always remarkable. My collection of Grip toys is one of the best in the nation and I know these guys will be drooling. Will they be able to resist the urge to attempt world class feats with the implements right before their eyes, or will they try to tackle them the night before and tire themselves out?

These questions and many more will be answered this weekend, but I want to know what you think. Leave a comment with who you feel will win, whom you’re pulling for, and what numbers will take place at the US Grip Nationals.

Here is the link for the live streaming video of the National Championship: US Grip Competition

(The video will go live when the competition starts)

Thanks and all the best in your grip training,

13 Responses to “Who Will Be the United States Grip Champion?”