Two weeks ago, I released my new ebook called, “Lift the Blob.”

Since then, I have been receiving near daily emails and facebook messages containing training updates, PR’s and other strides and breakthroughs that people are experiencing.

Today, I finally got the time assemble some of them together to share them with you.

Check out some of these awesome reports from new and future Blob Lifters who bought Lift the Blob:

Here is Ivan’s initial run-down of the Lift the Blob ebook:

“Just wanted to mention: Burned through the blob info. GREAT stuff. Back story/history on the blob was awesome, tips, tricks and program look killer. I’m starting back on blobs next week and there were several small things you mentioned that had never occurred to me but I was doing wrong all along. I’m convinced that I very well may have the strength to pick it up right now if I break some bad habits and change just a couple little things you pointed out in the ebook. But blobs aside, what I wanted to say is the info on radiant tension was a HUGE help in other avenues of strength. I applied it to my grab on atlas stones the other day (which I suck at) and flew through reps like I was throwing styrofoam balls. I’ve also found it to make a huge difference on my axle work. Even if I never touched a blob again, that one piece of info is worth the price of admission. Great work on a very well put together ebook!”
-Ivan Ribic-

Ivan has since lifted the Blob for the first time, as well. Here’s the message I got: 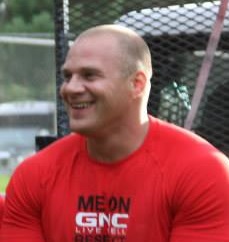 “I had a pretty limited training session today because my thumbs are still pretty raw from last week. After a really short warm up and playing with the chalk a little I finally got a full lift with the 50.6lb blob. Managed 5 attempts with my left hand and 1 with my right. I decided to call it quits there before I tore any more skin but am JACKED that I finally manged to pick the damn thing up.

I fought with blobs for 5 months and couldn’t even budge a 45 pounder. 2 weeks of training with the “Lift The Blob” book and I’m picking the 50lb. Kind of weird but I’m almost starting to think Jedd just might know what he’s talking about.”
-Ivan Ribic-

Congratulations, Ivan! I knew that there would be some monsters lurking around who were already packing the heat to be able to Lift the Blob or were VERY CLOSE, but just had to refine their technique a bit in order to get it. Nice job, my friend.

Stop Messing Around. Get Lift the Blob Today. Click Below.

“Jedd. The right hand has very little feeling since the stroke. I can feel hot and cold (to a point), hard and soft but most importantly I can feel pressure. So if I’m dropping a weight I can feel that and know to “hit the deck” especially on military presses. I gauge the pressure in my thumb by looking at the color of it. Too much “white” and I know I have an uneven grip or holding the weight too tight. Still at the beginning stages of my open hand grip strength but your blob course really gave me some good ideas on how to train my hands. I find that those ideas in the blob course carry over to a lot of things I’m doing.”
-Phil-

“I’ve finished the first week of your blob routine and I’m loving it, I am really confident I’ll be lifting [the Blob] soon.” -Tom Scibelli

“Great job on the Blob eBook bro. Awesome! Dude, that fatman clone lift is unreal. I was lucky enough to buy one of those. That lift is unreal then again so are you. I almost fell over watching that!!! Thanks Jedd!”
-Michael Sheehan-

There is substantial technique to Blob Lifting. Just as Ivan was able to coordinate his tension production in order to make strides in his Blob Lifting, this gent below now understands proper hand positioning…

“[I] purchased your E-Book on Blob Training. Particularly liked the part on hand position (I really was doing this wrong). You certainly put a great deal of time and thought into this project. Thanks again for the information.”
-Gary Gray-

The Blob Posse: Gang Mentality in Lifting the Blob

In the Blob Posse, the closed group only for those who have purchased Lift the Blob, there are new reports of improvements with Blobs and Block Weights every day.

For instance, Mike “The Shark” Sharkey is posting new PR’s and ground-breaking feats almost every day in the Blob Posse Group. Here is some training he did during a break from work when he went home to walk his dog for a bit:

“I am recommending your book to everyone!”
-Mike Sharkey-

Ladies Are Entering the Fray Too

And don’t think that if you’re a woman you have no place in the Blob Posse! Here’s a video of our own Gabriela Beckmann lifting two of her first Blobs on her way to Lifting the Blob…

What are you waiting for? Get Lift the Blob and clean up your approach, technique, force production and mindset that will help you Lift the Blob.

Who knows – you may already have the strength needed to Lift the Blob. The only thing you might be missing is direction.

It would be a shame to put this off any longer.

This entry was posted on Monday, October 21st, 2013 at 8:14 am and is filed under Uncategorized. You can follow any responses to this entry through the RSS 2.0 feed. Both comments and pings are currently closed.