Well to start I definitely did not think that I was going to win at the start of the day with Eric Roussin and fellow Canadians including Justin Major and Tom Bryson I was hoping to sneak into the top 3 overall. 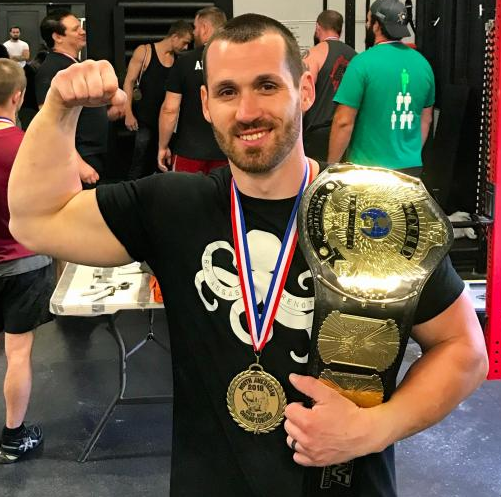 To start the day I woke up at 4:15am super anxious for the contest which is normal if anyone knows me. My weight was somewhere near 205 but wasn’t too concerned whether i would be in the 93k or 105k class so i ate a small bowl of oatmeal and drank a creatine drink. I had a bunch of stuff I needed to load in my truck and planned on being at the gym early to help Jedd setup what he didn’t have done. After the 50 minute drive there it was 7:45 and only Jedd and Nigel were there. This was my first time meeting Nigel but following him on IG and FB I feel like I already knew him. After messing around with the two different scales we realized they were both about 1 lb over after checking them with the calibrated plates so we were both good for our respected weight classes. After getting everything settled in an people slowly coming in I relaized there must be something in the water in Canada that makes the people grow bigger because their smallest guy was over 6’ tall and the lightest Dan Fleming is a grip monster.

Chez had put together a list of the USA team for each event and after going through it, the lineup was set and knowing it was going to take some serious lifts to surpass the team from up north.

Event 1- Grippers– I hadn’t been able to train heavy grippers R handed due to injurying my R middle finger when chalking the hub in the Armlifting Contest in Philly (yeah quite the way to injure your finger); so I was unsure how I would do and I was hoping I could get 1-2 decent closes RH on the first two attempts and then if I had to go LH. First attempt I decided to go fairly high with a 155 and smashed it closed, immediate sharp pain in my finger but dissipated enough for me to try 160; close but no cigar. Next attempt I took LH and wasnt close and final attempt RH again no close. Finger held up enough to get me where I was hoping to end up.

Event 2- Euro Pinch – Last contest I was training and consistently pulling 227+ training but wasn’t able to reproduce those numbers in contest. This event I didnt even train Euro specifically instead training flask and IM blockbuster so I was unsure where I was going end up especially since tearing on my last flask session. Warming up I felt pretty good and was able to a few singles at 216 lbs on the warmup implement but is much more seasoned. After hitting my first two attempts at 203 and 208, Rob and I decided to jump up to 218 and both of us unsuccessful.

Event 3- 60mm Napalms Nightmare – thickbar has always been where I lag behind compared to the other elite 93k people and this was no different. I started light at 323 and took my next three attempts at 333, 338, and 348 all successful. The three thickbar giants from Canada still hadn’t even started; Eric, Justin, and Tom. I wasn’t paying full attention but I believe Tom finished around 380-390 and the Eric and Justin at 412. Justin was frustrated as he had pulled 430+ in training which is just unreal strength for both guys. I knew at this point I was close to the top 3, after figuring out the scoring I was indeed 3rd place behind Justin and Eric and felt I had a possibility of moving up based on the medley and wrist roller event.

Event 4- Medley – based on the items and the weights I was hoping to coming in at 53-56/60 but trying to determine the order to which I could maximize the points without fatiguing and failing on items I would normally lift is that planning part of the medley that makes it challenging. Knowing fatigued I wouldn’t be able to lift the 160lb crusher or the fatman blob those were the first two items I did. I was able to get everything I wanted except the 50lb inverted DB which I ended up with 55/60 which was the winning score wit the next highest being 51/60. After this event Eric and I were tied for first and Justin close behind.

Event 5- Wrist Roller – Ive had success with wrost roller events in the past and Jedd and I tried to figure out an appropriate weight that would lead to about a 40% success rate for the competitors and came up with 115lbs added to the sled. So 130lbs, 34’ and 60 secs was the course. As contestants went through the first competitor to finish was Nick Carigan (Canada) and then 3-4 more competitors coming in around 51-54 secs. Then in third place Justin Major sets a blazing fast pace with 39 secs with Eric and I still to go. In my head I now have to see how Eric does but also have to be able to stay within a few seconds of Justin to win the overall. Eric came up 2ft short of finishing and now I had to pick up my game as this was mine to win. No one else to help and all on me, I win or lose it’s all me. Prior to my attempt my anxiety was kicking in, heart rate was elevated, a little shortness of breath; so after chalking up I decided I would set a timer on my phone for 75 secs and when it said 60 I would start. As I am going I am focusing my eyes on the rope as it is winding on the wrist roller and nothing else, I could hear people yelling including Adam with the time but couldn’t decipher the words and the first time I looked up the sled was about 6’ from the line and I kept cranking on it until it crossed the line and looked at my phone which said 25 sec remaining so I had finished it in 35 secs and then In the excitement and couple yells I realized I had won my first overall contest and just happened to be NAGS.

Jedd had informed me that Brad Martin the gym owner had donated a prize for the overall winner and to find out it was a genuine replica of the 1988 Winged Eagle WWF Championship belt was truly badass.

It was a pleasure not only being in one of the closest grip contests but also competing with a bunch of new people that I had only ever seen on social media including; Nigel, Vinnie, Tom B (who made the trip from western Canada), Justin M, Nick C, and Bernie. Not to mention everyone that I had previously met an competed with. I look forward to many years to come and hopefully team USA can bring the team championship back!

Ready to Get Started with Grip Sport?
There’s No Better Resource Than This DVD Set:

This entry was posted on Wednesday, June 6th, 2018 at 10:25 am and is filed under Grip Contest, Grip Sport, grip strength competition contest. You can follow any responses to this entry through the RSS 2.0 feed. Both comments and pings are currently closed.