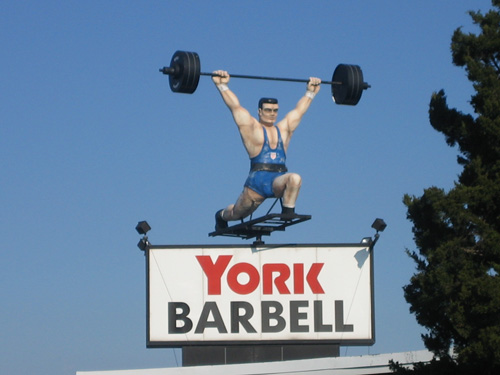 You’ve heard the expression, “They don’t make ’em like that anymore.”

York Dumbbells, with their pull-shaped heads, resemble that remark very well, but many do not realize that it also describes some of their styles of lifting plates as well.

Multiple times over the last few weeks I have been contacted regarding the thickness of York Barbell plates. York plates are a popular style of plate, especially the older vintage designs.

Some of those who have contacted me live overseas and have not had the opportunity to purchase or train with York plates, so they wanted to know the thickness of pairs of the plates in order to be able to craft pinching blocks of the proper thickness in order to train for lifting them.

So, I went down to the gym this weekend and captured on film the size of a pair of 25’s and a pair of 45’s for those interested in this kind of information.

In this video you will see the measurements of the York Barbell 25- and 45-lb plates I have in my gym.

While I am at it, I thought I’d make mention of a couple of other traits about York barbell plates, especially how they relate to Grip Training.

I have 4 York 25-lb plates. Of them, 3 have very heavy machining marks on the flat sides, while 1 is almost devoid of machining. Of all of the 25-lb plates that I own, the Yorks are by far the thinnest. I did not get the thickness of some of the other styles of 25’s I have, but there is a substantial difference. This difference in size and the texture of the machining on the plates combine to make a tremendous difference in difficulty between them when trying to pinch lift them.

For instance, a common for of Grip Training is Plate Pinching. This involves positioning 2 or more plates together so that their smooth sides point out. You then place your thumb on one side and the fingers on the other in a pinching grip and try to deadlift them.

Of course, you can also try other plate combinations, such as 3-25’s. This is a pretty elite Pinch Feat. However, with York 25’s, at least with the 25’s that I have, the texture on the plates is so prominent, I would estimate it reduces the impressiveness of the feat by at least 15% to 20%. The machining, plus the rust from use over time just gives you a better grip on the plates, not to mention how narrow they are. If you are close to pinching 3-25’s on wider and slicker plates, I bet you could probably pinch grip a set of 3-25’s from York, especially if they look like mine.

As I said above, you should be proud of your pinching power if you can pinch two 45-lb plates with one hand. This is a hell of a feat of Pinching Strength. There are two main reasons why pinching 2-45’s from York Barbell is so awesome.

First off, York 45’s are much wider than two 45-pound plates from other companies’. I have combinations of 45’s where 3 of them are roughly the same size as two of the York 45-pounders. Width in pinching can make a pretty substantial difference because it requires the thumb to do a lot more work. Often, Gripsters have a sort of “sweet spot” that they they like for pinching. Narrower than that sweet spot is usually ok, because they can deal with it and their numbers don’t suffer too much, but get out wider and the numbers can really plummet, especially in one-hand lifts.

The other factor that makes two York 45’s so hard to pinch is the rounded edges of the rims of the plates. Because these points are not squared off, when you try to pinch them together, they automatically want to slide if the plates are tilted even just a few degrees. Once they start sliding, it is over and by tilting plates slightly you can engage more wrist and fingers in the lift and take some pressure off the thumbs. This is not an option when using two York 45’s.

So, as you can see, York barbell plates are a different style of plate altogether, presenting additional challenges in some ways while being easier in other ways, but regardless of the advantages/disadvantages they are still a prized possession for many people, myself included.

Got more questions? I’ll shoot a video or answer it in my newsletter. Make sure to sign up for updates today.

This entry was posted on Monday, January 30th, 2012 at 11:23 am and is filed under grip hand forearm training for sports, Grip Sport, grip strength, how to build pinch strength. You can follow any responses to this entry through the RSS 2.0 feed. Both comments and pings are currently closed.

7 Responses to “York Barbell Plates – Keys to Strength Training Past”