World's Strongest Hands 2011 is in the Books

After three long months, World’s Strongest Hands Series 2011 is complete.
In case you are not familiar with WSH, it started in 2010 with a 4-leg series of contests for a cumulative score. This year was the second time it was held, and there were three Legs you could attend to accumulate as high of a score as possible.
The Legs were held on August 16, September 11, and October 8 and on each leg there were 4 events. The Vulcan Gripper and the Two Hands Pinch were held on each leg and then each event was rounded out by two out of three possible Grip Topz apparatus, the Shallow Hub, the Stub, and the Half Penny.
After the dust settled, I am proud as hell to be able to say that I finished number 5 in the Open Class (over 82.5 kg bodyweight). This was a complete surprise to me, as my first two legs went very poorly, especially in the Two Hands Pinch, due to extremely humid conditions, and my standing going into Leg 3 was down around number 10.
Here are the top 5 in the Open and Light Classes:
At Leg 3, the events were Vulcan Gripper, Two Hands Pinch, Hub and Stub. Below are write-ups and video clips from each event. 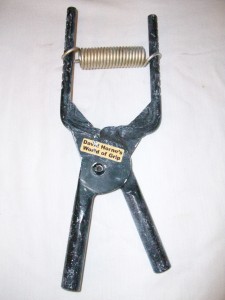 Going into Leg 3, my top close in competition and in training was Level 17, but with the fortune of a good quick set on my third attempt I was able to hit an all-time best PR on the Silver / Black Dip Spring with a Level 18 close.
Below, is a quick video of several of the attempts from all of the competitors. Take note, as you watch the video and you will see, Jim Storch, USAW-certified Olympic lifting coach, competing in his first ever Grip Contest after many years of competition in Olympic Lifting and Powerlifting. 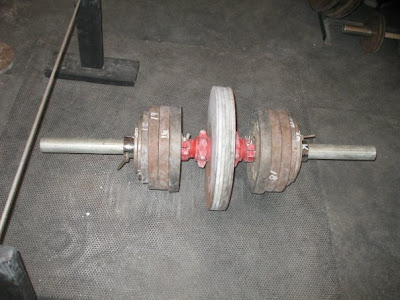 At Leg 1 and 2, the humidity conditions were repulsive for the Two Hands Pinch event. At Leg 1, I had forgotten to run the dehumidifier and at Leg 2 I ran it but it was so hot out and with so many people in such a small place, the Pinch Plates felt soupy.
I vowed there would be no humidity issues for Leg 3!
Prior to the Pinch event, we assessed the inside feel versus the outside feel and with a slight breeze and comfortable temperature, we decided to open the garage doors. Soon, the Two Hands Pinch device began to feel like its old self.
Instead of grabbing it and thinking you were trying to pick up a freshly caught Pickerel, it felt gritty and rough like so many contests of the past where the Pinch Gods looked down on me and smiled.
After the coin flip to see whether 54-mil or 58-mil would be contested first on the Pinch, we got started. The 54-mil group went first and many guys put up their first ever numbers on the European Adjustable Pinch device. One athlete, Sean Kovacic, traveling from Ontario Canada, got his first taste of Pinch Pr and Pinch Pain, as he posted a personal best, while also watching the apparatus slip out of his hands with absolutely no warning at all.
Soon, it was time for the 58-mil group. I chose to take part in this group for the first time ever, since my first competition on the 2HP since 2005. Shortly after Leg 2, I saw in training that 54-mil just was not feeling right. Testing out 58-mil brought about numbers about 20-lbs higher, so I continued training on it for the next several weeks, one time posting a legal lift in training of 240+ lbs which general means I am good for well over 250-lbs in competition.
For my first attempt, just to be safe and make sure I got on the board, I started out light at 235-lbs. That familiar feeling of radiant tension pulsating through my body as I compressed into the Pinch and continuing as I levered it up through action at the hips came back and I knew it was going to be a good day. I immediately requested 15 more pounds for my second attempt and 250-lbs felt just as good as I brought the Euro up to the target bar and controlled it back to the floor.
On that pull however, I had something happen that I have never had happen on the Two Hands Pinch before – I ripped the seat of my pants out. I opted not to change them, figuring that the rip would not phase me on my second try. A new record-weight of 265-lbs exactly was loaded on the device and I made my way to the platform. However, upon lifting the implement clear of the ground, I heard another loud rrrrrrrrrrrriiip, which slightly threw me off and the massive 265 came crashing back to the ground.

Now it was time for re-grouping. Now it was time for a wardrobe change. I sprinted from the gym, through the lower level of my mansion, up the many flights of stairs and up to my dressing room. There, my hair stylist was taking in some Angry Birds on her Smart Phone. I asked her to leave so that I could change into some sweats and she took off, flinging yellow birds at green pigs.
Now, when it comes to competition attire, my friends, I do not take things lightly. The shorts I was wearing that ripped were the off-white cargo pants that I was wearing in June when I went to Sorinex and in July when I set the record at 120-kilos. These dockers have become rather special to me, so in losing them to a wardrobe malfunction, I knew I had to choose wisely the pair of shorts or pants that I would go into battle with for my last attempt.
I knew there could be no other pair of competition pants to choose than my amazing fleece sweat pants which I was wearing when I first broke the record in 2009 and when I broke it again last year at World’s Strongest Hands 2010 Leg 4.
After pulling on these loyal threads, I took a breath to mentally prepare, told my hair stylist she could come back to her table, and marched back down stairs to the Den of Iron where I would make my final attempt.


As you can see, I came very close to completing the lift. I have watched this clip over and over and the only technical flaw I can pick out is that my speed to the cross-bar slowed tremendously. This tells me I need to do more speed work in my training, which is one of the things that has helped me tremendously over the years. In fact, I show a lot of this speed work in my DVD, The Road to the Record. It’s amazing that the same handful of tactics have continued to pay off for so many years.


Daniel Reinard, from San Francisco, actually set a new World Record in this lift in the 82.5-kg and under class as well.


As you can tell, Leg 3 of WSH was an awesome experience. With the conditions nearly perfect for both humidity and temperature on a normally unpredictable Fall Day, many competitors were able to set new PR’s on multiple events.
For me, the next competition will be December 10th, 2011, at the Gripmas Carol in Zanesville Ohio. I have already begun training specifically for the event, and am ratcheting the intensity of my Two Hands Pinch training up a couple of notches because I am gunning to move the record up again, since I will not have the pressure of having to run the contest to any degree, like with WSH.
Also, I plan on continuing my focus on Gripper training for the next couple of weeks as I would like to have another go at the MM3, which I am all paid up for but have not tried since November of 2009, I believe.
If you competed at World’s Strongest Hands, share your experience in the comments section below. I’d love to hear from you!
All the best in your training.
Jedd
P.S. Check back later in the week for more video clips of some additional feat of strength challenges that we tried later on following the event!

7 Responses to “World's Strongest Hands 2011 is in the Books”