This Fall it is time to BLOW UP the Grip Sport participation in North America and especially within the continental United States.
Starting in August is the Annual Worlds Strongest Hands Series 2011. 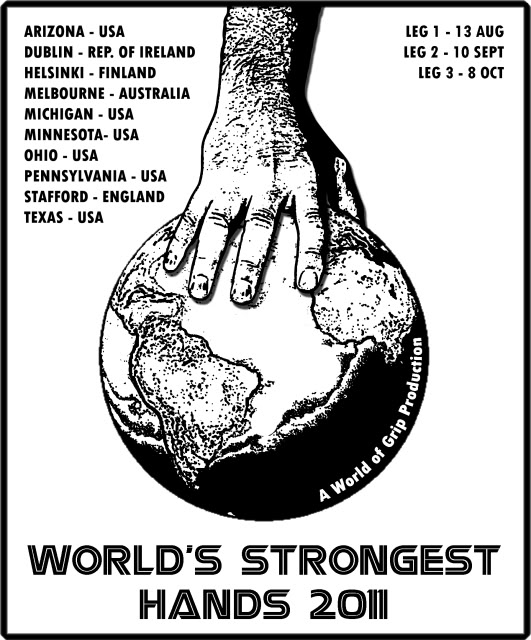 Starting August 13th, 2011, there will be contests going on all over the world at essentially the same time using the same exact events and tools in order to crown the overall champion.
The head promoter in all of this is David Horne. He has sent the equipment to all of the promoters and now we are just waiting for the drop of the hat to get underway.
I will be running my legs of the WSH II here in Bradford County Pennsylvania, and I welcome all to attend and give it a try.
Admission into the contest is only $15, and you can pay all the fees at once for a total of $40 as well.
In addition to the overall standings that will be tabulated as we march through each stage of the series, we are also throwing around the idea of having Regional Champions here in the United States. There will be one Regional Champion at all the venues, which look something like this:

If you are interested in attending, live in one of the areas, and would like to attend, then please go to the Grip Sport Promoters Page and find the contact information for your Local Grip Sport Regional Promoters.
EVENTS
If you are wondering about the specific events for each leg, here is the information…

***Each leg will feature the two hands pinch, the gripper, and two grip top events***
Below is a picture of the Grip Topz…

These events are going to make this series very very interesting. I am expecting some upsets to take place across the nation and around the globe. In fact, I have been trying to train my ass off on this narrow stuff because I SUCK AT IT!!
So essentially, you could show up here and hand me my ass on three separate occasions because I am just that damn bad at these events.
BUT I am competing anyway, because I love it!
The Biggest Call-Outs Grip Sport Has Ever Seen
So, these are some of the guys I am looking forward to seeing here at my place for all three legs of the WSH Series, that came up last year for one or more legs.

And this is the last person I am laying out the challenge to, to either come to my place to compete in my Regional Stages, or to travel to the one nearest you…
YOU.
You my DIESEL friend, need to start making plans, start setting aside the money, start studying bus routes and finding the K.O.A.’s (Kampgrounds of America) from your place to mine in order to take part in this awesome series of contests.
If you have any questions, leave a comment below or email me.
This is your chance to be great.
All the best,
Jedd

This entry was posted on Tuesday, July 26th, 2011 at 11:38 am and is filed under Grip Sport, grip strength competition contest, worlds strongest hands. You can follow any responses to this entry through the RSS 2.0 feed. Both comments and pings are currently closed.