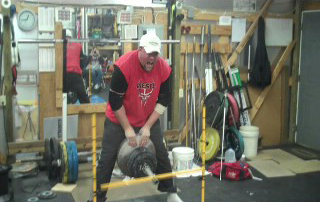 The Series involves three events: the Two Hands Pinch, the Wrist Developer, and the Vulcan Gripper.

This has been an outstanding way to truly test ourselves against one another all across the globe.

From the beginning of the WSH Series, Grip Sport athletes have been gunning for the record, one of the most highly regarded records in all of Grip Sport.

In August, September, and October, no one, not even myself was able to eclipse the mark. While I felt excellent at Leg 3, a severely torn spot of skin on my thumb kept me from setting a new mark.

But Leg 4 proved to be a day of Pinch Heroics, especially in Stafford, England and Crooksville, Ohio.

Since the individual contests take place at different times and in different time zones, the British competition took place roughly 5 or 6 hours before the one I attended in Crooksville, Ohio. I went to bed Friday night with a strong feeling that David Horne and Laurence Shahleai would be very close to the record. That feeling was still with me in the morning when I awoke.

I did not let this feeling get to me. Instead, I focused harder on my goal. I knew I HAD to break my own record in order stay on top of the list.

Sure enough, my feelings of a fallen record were true – both David Horne and “Big Loz” had both broken my record by slim margins. Horne (pictured to the left) broke it first, lifting an estimated 256.22 lbs. Then about twenty minutes later, Loz hoisted an estimated 256.39 lbs. This of course, was unknown to me because results of individual contests are not publicized until all of the contests are complete and results are sent in…

I was not sure how well I’d be able pinch, because my thumb had been torn so bad over the last several weeks that I could not do much training on the Euro Pinch device. Instead, I had to do some other forms of pinch training that did not aggravate my tear.

For my first attempt, I started out with 237 lbs – this is usually a very safe weight for me, and I believe I had lifted weights in this neighborhood in the previous two Legs of the Series. Sure enough, 237 came up very easy. So easy, I think I probably could have hit it for a double without resetting my grip.

After a short bit of deliberating, I decided not to take an intermediate jump from my first attempt to the next and I went straight for a new record. Twenty pounds were added and I lifted it fairly easily as well.

So now I had broken my previous record, but I was not sure if it was a big enough jump to put me ahead of anyone who might have broken the record earlier on, so I asked for 5 more pounds to be added.

I made sure to have my feet lined up properly and my mechanics dialed in, but I came just short of touching the loading bar to the stick. Getting cocky always bites me in the ass…

After a short break, I tried this weight again. I challenged the crowd to get louder, as I told them it was too quiet on the attempt before.

This time when I applied my Grip, I squeezed the damn implement as hard as I could, visualizing that my fingers were going to indent the outside steel plates. And this time, the implement came all the way off and knocked the target stick off the marker stand.

I was such a relief to hit 262 that I gave a scream that rattled the scrolled steel hanging on the inside of the garage.

I would have liked to have gotten 262 on the first try and then tried 264 as this would have been an even 120 kg, but I was happy with what I got because I figured it would probably be a large enough distance to over-take anybody that might have set a new record before me, or after me, as Aaron Corcorran, from Tucson, Arizona, has in the past lifted 254 lbs in an unofficial attempt.

So, I am blessed to have set another record.

How long will it stand? That is impossible to say.

But one thing I can say is I appreciate all of the support you give me here at the site, on Facebook, on YouTube, and by email. Having so many people behind me is a great feeling and it does make a huge difference, so thanks to all of you.

In particular, thanks to my family who puts up with my frustration when I have a rough workout. Thanks to my parents who have always supported me doing this underground sport. Thanks to my buddies at Diesel for pushing me when I do make it up to train. Thanks to Brent Barbe for continually pushing me via email and coming up here to train several times a year, driving roughly 5 hours at a pop. Thanks to Mike Rinderle and Rick Walker who keep my cell phone inbox filled with texts urging me to keep pushing forward. Thanks to Chris Rice, for holding the contest – I feel so much better competing when i don’t have to run the show as well.

I am sure I am forgetting some key people, but if I don’t mention you here, don’t think it’s because you’re not important. Every single time I get a text, email, or a Facebook/YouTube message from you guys, it makes want to get downstairs to my gym and get my hands on the Euro Pinch. I thank you all.

Thanks for checking out the post today. I have many more videos uploaded and more to put up tomorrow, so please check out the footage on My YouTube Channel.

P.S. By the way, even though I did very poorly in the first leg, I managed to finish #5 in the world at the end of Leg 4. Ka Kuh!

This entry was posted on Wednesday, November 17th, 2010 at 12:46 am and is filed under grip strength, grip strength competition contest, how to build pinch strength. You can follow any responses to this entry through the RSS 2.0 feed. Both comments and pings are currently closed.