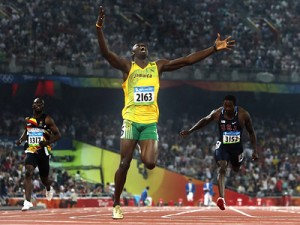 BEIJING – AUGUST 20: Usain Bolt of Jamaica competes on his way to breaking the world record with a time of 19.30 to win the gold medal in the Men’s 200m Final against Kim Collins of Saint Kitts and Nevis, Christian Malcolm of Great Britain, Shawn Crawford of the United States, Churandy Martina of Netherlands Antilles, Brian Dzingai of Zimbabwe and at the National Stadium during Day 12 of the Beijing 2008 Olympic Games on August 20, 2008 in Beijing, China. (Photo by Mark Dadswell/Getty Images)

This entry was posted on Friday, August 22nd, 2008 at 6:32 pm and is filed under . You can follow any responses to this entry through the RSS 2.0 feed. Both comments and pings are currently closed.