Hey everybody. Jedd here. One of my good friends in Grip Sport, Brent Barbe, recently told me that he would be traveling to Iceland in the near future to tackle the famous Husafell Stone. I thought that this sounded incredible, and asked him to document his training for the Diesel site, which he agreed to do.

I’ve known Brent since 2006 and since then, he has continued to improve at Grip each and every year. But what many who know of Brent from Grip competitions don’t realize is that he has also trained for and competed in other strength sports, and he always has a plan laid out so that he can accomplish his upcoming goals. By the looks, he also has a pretty solid plan laid out for lifting the Husafell Stone, which is no surprise to me. So, here is part one of Brent’s adventure toward the history books… 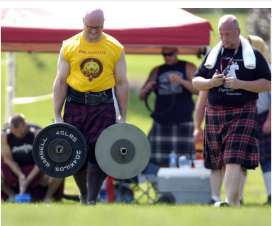 Who is Brent Barbe?

First, let me tell you a bit about me. My name is Brent Barbe. I’ve been involved in Highland Games and grip sport for a little over 5 years. I’ve also done a little strongman as well. In 2008, I suffered a pretty bad lower back injury that resulted in 2 massively herniated discs. The doctors wanted to skip straight to surgery. Instead I tried cortisone injections and a lot of physical therapy. Since that point I’ve been trying to get back to where I was before the injury. It still nags a little bit but, I’m basically able to train however I want.

About a month ago my wife and I started planning a vacation. I left most of the details up to her since I was busy with some other things and didn’t have much time or energy. She decided we should go to Iceland since she wanted to see the northern lights. After she told me this the first thing that came to mind was the Husafell stone. I didn’t give it much thought since I figured there was no way I could pick it up let alone carry it the full distance. I mentioned this trip to some people and they asked if I was going to try the stone. So, in about the space of a week it went from not trying to I will break myself carrying the slab.

What is the Husafell Stone

For those of you who don’t know, the Husafell stone is a large testing stone in Iceland. It’s roughly diamond shaped and weighs about 400 pounds. Men have lifted it to different heights as a test of strength for hundreds of years. However, the most famous test of the Husafell is to carry it for distance. With the original stone the distance is the full trip around an old sheep pen found in Husafell Iceland. When the event was featured on the World’s Strongest Man it proved to be very popular. In fact, concrete replicas are tested at strongman comps all over the world. 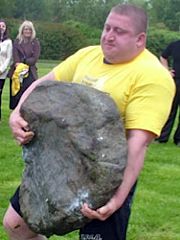 After deciding to train for the lift I got in touch with some of the gurus I know. After a number of emails back and forth I had a game plan and a training strategy. Jedd wanted me to document my efforts. Part of the reason for this is that I will really have to improve almost every aspect of myself to pull this off. As focused as I have been I have already managed to gain 15 pounds and improve significantly in a number of lifts in only about 5 weeks of training. I have a long way to go and only about 5 months to do it in. Hopefully by putting this out in the public I will be held accountable and succeed.

Training for the Husafell Stone

My training is based on a 4 day split with 3 days per week. A fourth day of the week is devoted to stone lifting and conditioning. Basically the gym split follows a deadlift, bench, squat, press pattern. Since I have to pull so low on the stone I’ll be doing mostly deficit deadlifts. Front squats will make up the bulk of my squatting since the stone is a front carry. I’ll be playing it by ear and making changes when I need to.

That’s about it for now. I’ll be posting some video and updates as they happen. Wish me luck.

Note from Jedd Brent, I wish you the best of luck in your upcoming adventure. We are all behind you and we look forward to hearing how things are going. This is an awesome initiative and I know you will pull it off.

All the best buddy.

This entry was posted on Thursday, September 16th, 2010 at 10:47 pm and is filed under athletic strength training lift odd objects, feats of strength, strongman feats, strongman training for athletes, strongman training log stone tire farmer. You can follow any responses to this entry through the RSS 2.0 feed. Both comments and pings are currently closed.

6 Responses to “The Husafell Stone Challenge”