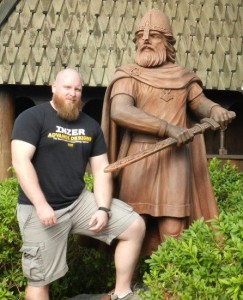 We were seated at a common table with a family we didn’t know. No problem, my wife is pretty social and I can fake interest in just about anything for 30 minutes. It was the German Bier Garten at Epcot, and $13 a beer wasn’t going to stop me from enjoying myself.
As I looked around the large auditorium like seating area, I noticed something troubling. At nearly every table sat a skinny, smug looking d-bag with either a livestrong bracelet or some kind of motivational running t-shirt. What was stranger, none of these “men” even had a beer in front of them.
One man with hair past his ears appeared even to be wearing a beret! As I turned to look at my wife in bewilderment, down sat a young guy in the vacant seat next to me. I watched on in horror as he opened his beardless face and a high, slightly pitchy and annoying voice screeched out. Thus spoke the Beta-male: “I can’t wait for tomorrows 5k!” 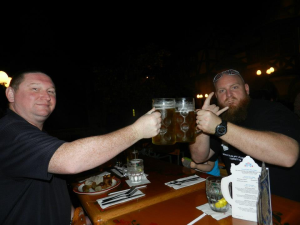 That last one hit my ears as I lowered one of the liter beer mugs from my face only to raise another with my other hand, and it made chills of rage run down my spine.
I turned to look upon the baby deer like runner, my neck creaked as scar tissue broke under the immense weight of my beast fur. My beard twitched as it parted the way like great red drapes for my mouth, reminiscing of Moses when he made the Red Sea into a nature path. Surprise and terror washed over this wuss’s face as I set my cold dead eyes upon his virgin baby blues. With sheer malice, the churning hell pit of my stomach sent forth a metric ton of gas. The terrible cloud left my face at nearly mach 2 and blew the club-friendly-rock fan’s head clear from his shoulders. His own family cried as they thanked me for what I had done. I responded with an aftershock.
Once I cleared out the entire left half of the buffet and broke a third of the dishes due to just how rough I eat, I decided that super lunch (the meal between lunch and 1st dinner) was over. I payed in red whiskers and tipped the waitress with 3 farts, which she graciously accepted.
As we walked out in search of more beer for my face, I couldn’t help wondering:

It wasn’t until much later when I sat down to release a school of brown trout into Walt Disney’s magical sewer system that it hit me!
A “race” To 5k (5000#)!
I flushed the toilet and immediately contacted Jedd Johnson. This is what I told him:
The 5k challenge will be as follows:

This challenge is for the Alpha-females as well! I know not every lady is sitting around the house reading 50 shades of Gray. Some of you She-Ra’s are doing power cleans and front squats with twice the weight that our beta-male could curl in any standard power rack. So Ladies, get your war face on, tie your hair back with some barbed wire and embarrass some of these guys.
The Top 10 Performances (men and women), using as few attempts as possible, will be posted here at DieselCrew.com
This is a new spin on the 3 classic lifts. Who can do this in 15 lifts? 10? 9? Less!? Give it a try and see where you stack up! 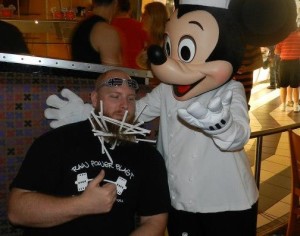