With my ongoing back issues, I’ve been working on some feats that I don’t normally take time to work on.

Here are some quick clips of some of the training I’ve been doing.

This is a feat originated by one of the most widely recognized performing Strongmen, Slim “The Hammer Man” Farman. The objective here is to start with the hammer parallel to the floor, with your hand on a towel or pad, and then to lever it up into a vertical position, so that it contacts one of your shoulders.

Below, I do the feat with a 16lb Sledge. I’d like to work up to a 20lb Sledge though, which I’ve done twice in the past. I don’t recall seeing anyone but Slim go beyond 20lbs, so it would be nice to work up to that point as well.

Next is the Face Lever, a classic oldtime strongman feat, popularized, again, by Slim, and done by many other strongman performers over the years.

The objective here is to start with the sledge vertical, lower it to the face or head, and then return it back to the vertical position with the strength of your wrist.

This is one of the most elusive feats of strength, for me. I struggle with wrist mobility, so I have trouble getting the hammer to my head, and as a result I end up dropping my arm down. So the video below is a poor example of execution of the lift, but it felt cool to add weight to the hammer and then take it off to make the 20 feel lighter. This is a technique that I showed in my program, Lever Bigger Hammers, but haven’t done for a while.

I’ll have more updates on the Sledge Training, since picking things up off the ground is still a no-go.

If you’re looking for ways to improve your sledge hammer training, check out the programs below.

Sledge Only Training for Bending Prep

I recently got this note from Rob Russell about a charity event he is holding very soon. It sounds like it’ not only going to be awesome, but very challenging as well. Check it out and please give if you can. I have donated a couple of ebooks, the Nail Bending eBook and the Card Tearing eBook. 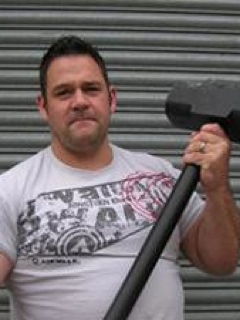 Jedd, I love challenges and the tougher the better! I’ve been training for many years now and been down just about every avenue possible.

Over the last 7 years I’ve taken up many forms of non-conventional training, kettlebells mainly, along with strongman, maces, sandbags, grip training and over the last 2 years heavy sledgehammer training. 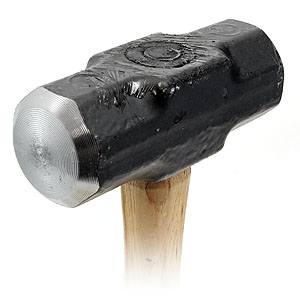 The first person I ever saw swinging a heavy sledgehammer was John Brookfield, it looked so brutal I knew I had to get one of my own (a 25kg one to be precise). Initially training with it was really hard, until I learned the technique and shortened the handle. In 2009 I was inspired by kettlebell and sledgehammer fanatic Stepf Dogman to go for a 1 hour sledgehammer challenge after seeing this guy weighing in at only 69kg strike a tire 520 times with a 20kg hammer. I managed 791 reps on my first challenge for a charity that I support.

October 15th sees me return aiming to break the 1000 rep barrier (that’s roughly 17 strikes/min). I have been training since May and racked up over 13,000 strikes over nearly 60 sessions. The basis of my training has been 10 min sessions 3 times per week, setting off at 10 reps/min increasing by 1 rep per week until I hit 20 reps/min for 10 mins then I started upping the length of my sessions. I knew 1000 reps was going to be a tall order so I thought starting early would get me a great base to work from.

The carryover from hammer training to repetition snatching has been great too, I recently did a new best in the 24kg 10 min snatch test with 252 reps without any specific kettlebell work, it has also done a great deal for my grip strength (my hammer handle is nearly 2″ thick). The best thing about the training I have been doing is that it’s all been done in my half hour lunch break at work. It’s resulted in being a bit sweaty at work but really gives you a physical and mental boost for the afternoon and allowed me to do other training in the evenings.

My event on the 15th October is for Charity and to boost fundraising I have written my first ebook – ‘Unconventional Conditioning,’ a 45 page book packed with many videos, tips for training and program ideas.

To get hold of this ebook and be entered into a raffle for some strength and fitness goodies I am asking for a 2GBP minimum donation on my nation on my Just Giving Page.

Thanks Rob! This event sounds AWESOME. I can’t imagine how brutally strong your hands, wrists and thumbs are getting from swinging the sledgehammer for such high volume. I know when I take my sledgehammer outside to swing it, my thumbs blow up like hot water bottles. All the best to you with your event – – Jedd