Grip Training for Martial Arts – Is Card Tearing the Answer?

It’s Card Tearing Week at DieselCrew.com, so I am posting an article I have been meaning to post for quite some time. I am often asked how to train the grip for sports such as jiu-jitsu and other martial arts. While there are many types of grip training drills that I would suggest for martial artists (thick bar training, block weight training, rope work, etc), I actually think card tearing, and other forms of grip strength feats, are excellent choices to prepare the hands for combat. Let me know what you think in the comments section, and if you want to learn how to tear a deck of cards, check out The Card Tearing eBook. 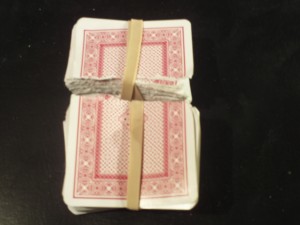 In the past, I have written about the art and practice of tearing a deck of cards. Card tearing can be an excellent form of training for the hands due to its requirement of a sustained grip and the need to direct power from the wrists and forearms through the hands and into the cards.

If you think about it, ripping a deck of cards is not unlike the hand requirements of many martial arts, especially those where a gi is worn, such as jiu-jitsu.

For example, take a look at the image below of one type of jiu-jitsu choke hold and try to focus in on the hands and imagine the levels of exertion being put forth in order to maintain the grip on the gi and perform the choke. 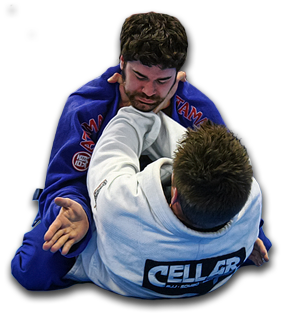 You might wonder what ripping a deck of cards has to do with close-quarter martial arts. If you consider the term commonly used in the strength and conditioning industry, specificity, then you will understand the reasons why.

Specificity has to do with the level of similarity an exercise has to the sport it is being used to train for. There is a broad spectrum of specificity, ranging from highly general (not very specific) to highly specific (nearing the exact sport).

To get the most benefit from the training time invested, an athlete or coach will usually choose exercises with a larger degree of specificity.

For instance, most strength coaches would opt to have football players perform sled dragging or prowler pushing over riding a bike for their cardio and conditioning because in football, you are on your feet and get power from driving the feet into the ground, two qualities of sleds and prowlers. When riding a bike, you are seated, so the sled or prowler work is more “specific” than the bike work.

As you’ll see below, tearing cards will prove to be a very “specific” type of training for martial arts, sharing many of the same qualities as gi-work and choke-holds, some of which you may never have thought of.

When speaking of specifity, there are many factors to consider. Here are several factors in bold text to show that the practice of card tearing matches well with jiu-jitsu. 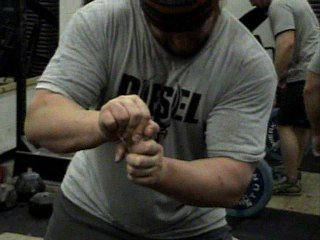 There are many movement pattern similarities between applying the choke shown above and ripping a deck of cards. In both movements, the hands are out in front of you and close together. There is not a great deal of movement in either of these tasks – that is, the hands do not cover a great distance. The hands are concentrated to the region around the throat of the opponent in the case of the choke hold, and with card tearing, the hands stay in the same position, for the most part, in contact with the top and bottom of the cards.

You can imagine the level of strain from the fingers that is going into this maneuver. This is not the kind of movement where you apply your grip and within a few seconds you are done, like lifting a barbell or other implement.

Chokes can last for several minutes, depending on how long it takes the opponent to tap out or lose consciousness, and how long you can actually maintain your grip on the gi. The same goes for card tearing – how quick you finish depends on how well you can get the tear started, how well you can keep it progressing, and whether or not you can deal with the pump and cramping that take place in the forearms, wrists, and hands while doing so.

In both the choke and in the card tear, the hands and forearms are in a similar position, with the hands crossed in the choke, and the hands very close to one another in the card tear. The elbows are also slightly bent which keeps the opponent close enough to control. If the arms are straight, it would be much more difficult to maintain control of the opponent because you lose leverage.

The same can be said with card tearing. As the tear is begun, the hands are close to the body, and while they may move slightly further away from the body throughout the tearing effort, the elbows never fully extend. They stay slightly flexed allowing for better radiant tension and strength transfer throughout the effort to tear the cards.

The Grip that is used when tearing cards is called a Crimp Grip, or a Clamp Grip, depending on how thick the deck of cards is and how large your hands are. The difference between a Crimp Grip and a Clamp Grip is whether the fingertips are directed more towards the callus line (Crimp) or more towards the base of the palm (Clamp). When clenching the gi of the opponent, the grip the fingers gets on the material of the gi will most likely vary between true crimping and clamping, depending on how well the grip is seated.

In neither card tearing nor in applying a martial arts choke is the thumb the primary force producer. Instead, it is an auxiliary unit that provides additional assistance to the fingers synergistically, helping to maintain the grip on the gi.

In the choking image above, it is plain to see that the thumb is very active in keeping the grip secure. The thumb pad looks to be inflated with blood from sustained contraction, and the tip of the thumb seems to be nearly piercing the cloth of the gi. This is exactly how the thumb works in the card tear, aiding the rest of the lower arm by securing the cards and keeping them from sliding around. A secured deck of cards is much easier to split in half than one where the cards are sliding all over, and when the deck is on the more difficult end of the spectrum, the thumb will feel like it is going to blow up from the sustained contraction.

So, in the case of the choke, what we have is the need to apply tremendous pressure with the fingers and thumbs, the ability to continue to apply this pressure throughout the time required to make the opponent tap out or pass out, and the need to deal the entire time with the immense forearm pump that accompanies such high levels of exertion.

As noted above, all of these aspects are found when tearing cards, too, as long as the difficulty level is there.

For instance, if you are tearing a deck of easy cards, the effort and duration of effort will not be equal to applying a choke hold.

Also, some card tearing practitioners are able to blow through a deck of cards in just a matter of seconds due to understanding the technique and force production requirements to do so. In those cases, in order to have the right degree of specificity and carry-over, they would need to add cards to the deck or make the tear more difficult through the use of gloves, oven mitts, or some other way to make the force and duration match up better to that of the choke hold.

In other words, if you work at tearing cards long enough, you can get good enough that you can knock them out in a fairly short time. Ripping cards with Blast Force will not give you the kind of carry-over you want for Martial Arts. Instead, the cards have to offer the challenge of about a 30- to 60-second battle.

For beginners, Card Tearing can be a great way to work the grip for excellent carry-over to sports, especially sports such as the Martial Arts, because it takes most people several weeks to several months of dedicated to training to attain the mastery card tearing to blow through a deck in a matter of seconds. Most of the time, the tear from beginning to end will take the better part of a minute to complete, and often will take much longer, even requiring rest breaks in between. 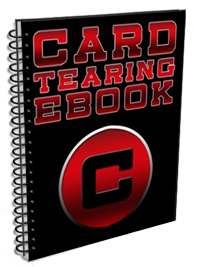 If you’d like to see complete instruction on Card Tearing, check out my Card Tearing eBook. It covers all the technical explanations and break-downs you need to know for Card Tearing, plus I’ll show you many other drills that will not only strengthen your hands, fingers, and wrists for ripping decks of cards, but you can also use them to be better prepared for combat-style sports.

Click the Image Below to Check out the Card Tearing eBook 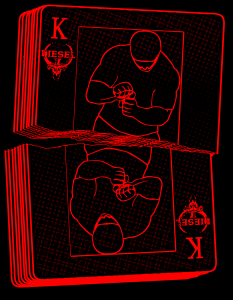 So, what do you think?
Does Card Tearing seem like a good physical match for applying a choke hold?
Let me know your thoughts by leaving a comment below.