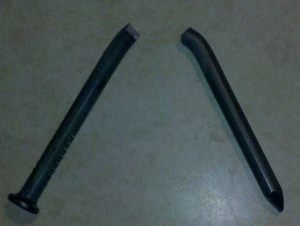 I was thinking about my training back in June and I realized that I have been bending nails for nearly 10 years. However, in all that time, I had never successfully done any nail breaking.

Nail breaking involves bending a nail back and forth over and over until it breaks. This is much harder than simply bending the nail into a U-shape, mainly because it takes so much longer to do it, requiring much more grip strength endurance and mental toughness and determination than simply bending it over. I’d tried several times in the past to break 60D nails, but after flipping it around and having it slip in my grip, I’d generally get frustrated and say, “Screw it,” and move on to the next thing.

This time, I really wanted to give it a solid effort and see if I could do it.

When I decided to take on the challenge of nail breaking, I immediately set my sites on the 60D nail, also often referred to as a spike.

If you are not entirely familiar with nails, I will explain. The term, 60D, means 60-penny, coming from England in the 15th Century.

From Wikipedia.org: “Penny sizes originally referred to the price for a hundred nails in England in the 15th century: the larger the nail, the higher the cost per hundred. The system remained in use in England into the 20th century, but is obsolete there today. The d is an abbreviation for denarius, a Roman coin similar to a penny; this was the abbreviation for a penny in the UK before decimalisation.”

The 60D Nail is also kind of a benchmark nail of Strongmanism, the practice of being a performing Strongman. So if you successfully bend a 60D nail, you can consider it a comparable feat to what most performing Strongmen of the past and present have done as well.

My first attempt at breaking a nail was long and tedious. It took me upwards of 20 minutes because my bracing technique was very poor and my wraps kept slipping over and over. To top it all off, my conditioning was lacking and between running out of breathe, my hands were also cramping up on me big time.

I continued to do my nail breaking training one or two days a week. I didn’t want to go overboard with it and end up with some kind of forearm or elbow pain, so I spaced my nail breaking days out pretty far.

Each time I bent I was able to whittle away more time, with my ultimate goal to finish the nail break in less than three minutes. On the second session, I was able to cut my time by more than half, going from nearly 20 to less than 10 minutes. I actually did two nails that session.

Finally, earlier this week, I was able to reach my goal of under 3 minutes.

In fact, it was around 30 seconds.

But there was something about that break that just didn’t seem right. I talk about it the following video.

I could tell right away on the initial kink double overhand that this nail, although it looked similar was no doubt a much weaker nail. In addition, the subsequent efforts to open the nail back up felt like I was twisting jello.

Below is the second 60D I broke in the workout. This one is one of two types of 60D’s that I was given in the past:

Here is the second, more difficult 60D nail broken in under 3 minutes.

You can see right away that this nail is just plain stronger than the other one as I had more difficulty with the initial kink, as well as the opening and the re-kink on every single effort. Plus, the lighter 60D never got to the same temperature as the harder one. With the harder one, I could feel the heat going through my pant-leg when I was bracing it on my thigh to open it up. 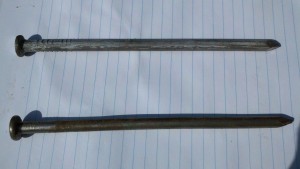 In closing, I will say that the coolest thing about breaking nails is the way the steel heats up as you work it back and forth. Like I pointed out above, the heat was so intense it felt like it was going through my pants and burning my leg. I have also had my finger get off the wraps and get in contact with the nail and gotten a noticeable burning sensation.

Next, I plan on working on some longer nails/spikes but continue down the path of breaking, as I like the endurance factor that it trains as well as the mental toughness.

The thing to learn from all of this is that nails will vary. Some are made to withstand more punishment than others.

How do you know if what you are bending is tough or not compared to other suppliers stock? You don’t. In fact, you will never know until you try other stock that is available. That is just part of the game that is Steel Bending. For more insight into the variation that can be seen between various nails, bolts, and bar stock, check out this post: Variation of Steel and Nail Strength.

More videos to come of Nail Breaking. Until then, all the best in your training.