I want to sit down for a while and start telling you about my fantastic trip to Sorinex two weekends ago. 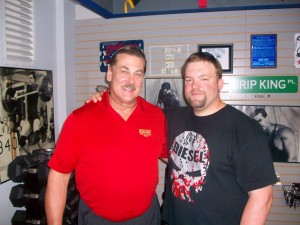 Richard Sorin, owner of Sorinex and innovator of the Blob (left) and Me (right)

Before I get into that, let me just tell you that if you EVER get the chance to go to Sorinex, do it. Their place rocks. Not only will you get to try some of the most outstanding grip equipment in the world, but they also have a completely fully functional training area for the rest of your body as well. Awesome.

With that, I also suggest that if you ever get invited anywhere for a strength training get-together, DO IT. The environment at these things is just plain awesome. Guys (or gals) pushing one another to try new things, cheering each other on, increasing the volume demands of the lower arms, all of this stuff can bring about PR’s. And once you get one or two PR’s, you really start getting momentum, confidence, and adrenaline which can lead to even more PR’s.

So, the weekend started for me by flying down to South Carolina, where Bert Sorin picked me up at the airport. I got into his giant SUV, I forget what it was, but it was beautiful, and I got to meet Nick Tumminello, a fantastic trainer, fitness coach, and strength coach from Baltimore.

Nick trains a great variety of clientele and his knowledge is fantastic. I also got to meet his good friend Benji, who came into town with his collection of cameras. Nick and Bert shot a DVD on Sunday on training with the Landmine. Benji does all of the video work for Nick, which must be awesome, because I do all that stuff on my own. 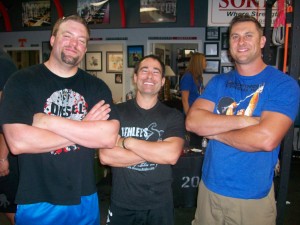 Me, Nick Tumminello, and Bert Sorin

On Friday night, I got ready for the next day’s activities by eating nearly two dozen buffalo wings at a place called Carolina Wings. I figured a place like that must make good wings, so I ordered them and they pulled through. Really good stuff!

Bert took me back to the hotel and dropped me off and I did a few hours of work on the laptop before turning in for the night.

In the morning, I met Nick and Benji in the hotel lobby and we walked across the driveway to Cracker Barrel. This is a damn good restaurant to get breakfast made the old fashioned way, but make sure you go early. We were there before 7 so we got in there easily. I tried to do the same thing the next day around noon with a hangover and I had to wait about 30 minutes though. I’m getting ahead of myself now…

So after breakfast, Bert came and got us and we went to the Sorinex facility. To give you a bit better idea of this facility, it is more than just a weight room. By rights, it is actually a showroom. All of the equipment is gorgeous. No paint is scratched off, there’s no sweat or spit on the floor like most gyms, and it smells like a normal gym, not an arm pit. BUT even with all its beauty, it is still fully functional and you can use all of it when you visit. It is great.

I didn’t really know what to expect at Summer Strong #4. I thought it was just a day of training, but actually they have like a full day of events planned, which was cool.

The first thing on the agenda was a gentleman named Coach Shrock who presented on speed development. He put this early 20’s kid through a workout that involved about a week’s worth of volume. The drills were awesome and I have stolen a couple for the guys I work with. The kid doing the demo’s took it all in stride (get it?) though and just kept on going.

After the speed training seminar, it was time for Andrew Durniat to do his section on Density Training. I thought he was going to talk about his kettlebell sport, but actually he talked about the stuff he does with his trainees at his facility. This is based on Charles Staley’s Escalating Density Training. He says it works out great for his trainees, and they rarely miss a workout because they are always so intense and also concise. If the client only has 20 minutes to train, it is no problem because they set up an EDT frame and get it done.

If you are wondering about the layout of these EDT blocks, Andrew says they usually pair up antagonsitic movement patterns, such as Pull-ups and Dips, and they go for a certain amount of time…Pull-ups then Dips, Pull-ups then Dips. I believe he said it is done in sets of 5 reps for each movement and they do about ten sets, but I could be slightly off on that. I took notes, but I lost my sheet along with about 20 email addresses I collected.

Once Andrew finished, it was time for an open lift. What went on is all of the people there just started training. It was awesome. I got in some foam roller work because I was still really badly locked up from the plane ride the day before. I pretty much did foam rolling, activation movements and stretching for an hour straight and I felt amazing.

After the open lift, it was lunch time. The day was moving pretty quickly. For lunch, they cooked a gigantic stew in a stainless steel barrel. The stew was a mixture of sausage, rice, eggs, and I believe pork lard. It tasted fantastic. I overhead one of the main cooks, who goes by the name Breeze, and who I believe used to be competitive Olympic weightlifter in the early 80’s talk about the importance of cholesterol in testosterone production. I didn’t catch it all, but what I did catch seemed to be logical.

Once lunch was over, there was a presentation Olympic lifting. The guys that did this presentation were Don McAllie and Glenn Pendlay. Don has a book called Power Up.

I was really into this presentation. Oly lifting was a major interest of mine when I first got into strength training. What got my attention right away was that these guys said that many Oly Strength Coaches these days teach the lifts wrong. They said that before listening to an Oly coach, you should ask them what they have done and who they have coached.

What it sounded like they were saying was that there are some coaches out there that make these claims to be these awesome Oly coaches, yet have done nothing themselves in competition and also have never coached anyone who has done anything in competition. I don’t have a lot of trouble believing this because that kind of stuff happens in every sport and in every profession. However, I do not know exactly who they were talking about.

Along the lines of doing the lifts wrong, I do remember three points they made. One was that at no time during the Oly lifts should you jump. I thought this was fairly obvious. I am not sure why anyone would want to leave the ground during one of the Olympic lifts. However, these next two points were pretty shocking to me.

They said that they do not teach triple extension during the lift. Now that was kind of a shock to me. Triple extension is the systematic firing of the hips, knees and ankles in extension in order to generate power into the bar, such as on the pulls and on the jerk.

The other thing that struck me as a surprise for them to say, but actually made perfect sense to me is that they do not teach a high pull, as in pulling the bar up high near the sternum when training for the Olympic Clean. Instead, you are using your traps and upper back to pull yourself under the bar. However, the high pull is a common derivative movement that is used to train for the Olympic lifts. This was a very interesting point.

I would have stayed and listened to the entire presentation, but we, the Grip Guys, were up next and Bert rounded us all up. He and his father, Richard Sorin, originator of the Blob, appointed me MC for the Grip segment.

When it was our turn, Bert introduced me and I walked the crowd through an explanation of what Grip is and how it can benefit you, as well as a little bit on Grip Feats and Grip Sport. After this, I ran down the list of events that would be going on.

I told them that first we would have a Pull-up contest between Tex Henderson and Andrew Durniat. Tex weighs 340+ lbs and Andrew weighs about 230, so Andrew was going to do is while hanging an additional 135-lbs from his waist, just to make things fair. In addition, to make this even more challenging for both guys, the pull-ups were done from Rolling Thunder handles.

Check out the video below…

Can anyone reading this do pull-ups with 135-lbs hanging from their waist?

Next up was Chad Woodall. Chad would be trying to pinch Two 45’s in each hand. Pinching two 45’s in one hand is an ELITE feat of Grip Strength in itself. Pinching Two 45’s in each hand at the same time is something I have only seen once or twice in my life. To make all of this even more challenging, Chad would be trying to pinch two old-style YORK 45’s. Old York plates are roughly twice the size of most 45-lb plates manufactured these days, so this feat is EXTRAORDINARILY DIFFICULT. Check out this video below…

Again, this is unbelievably HARD!

If you can not watch the entire video, here is Chad coming damn close

Chad will soon get this feat. It is just a matter of time.

In case your wondering, he also was able to fully deadlift two of these old Yorks in each hand separately. It as awesome to watch. Check out the video around the 4:20 mark…

Feats of strength that were once thought impossible are being performed on a regular basis now. It may only be a matter of time until we are doing Farmer’s Walks with two old York 45’s in each hand. Don’t EVER look at the videos and think that these feats are something you won’t be able to do. You might not be able to now, but down the line, who knows…

I’ve got tons more videos coming your way. Make sure to check back here tomorrow, or sign up for my newsletter, below, and I will hit you with an email when Summer Strong #4 Part II gets posted!

See what happened the rest of the day!

P.S. Couple other pics for you… 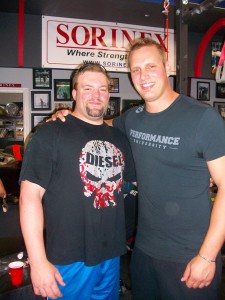 Me and Kevin Kamphouse from Sorinex 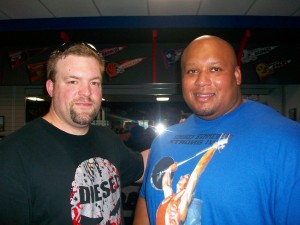 Me with Rich Williams

This entry was posted on Tuesday, July 5th, 2011 at 2:07 pm and is filed under feats, feats of strength, Grip Sport, grip strength, grip strength blob, grip strength competition contest, how to build pinch strength, how to improve grip strength. You can follow any responses to this entry through the RSS 2.0 feed. Both comments and pings are currently closed.