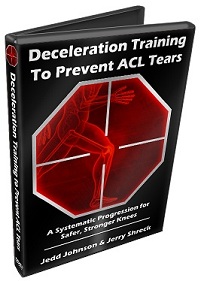 If you are on my email newsletter then the chances are you have already heard about the product I released this week with my friend, Jerry Shreck, called Deceleration Training to Prevent ACL Tears. I used to know very little about the ACL, until last summer when I roomed with Jerry at a Strength Clinic I attended. I quickly came to realize that Jerry was like the Shaolin Master of ACL Prevention.

I have learned a tremendous amount of information from Jerry, and I thought I would share some of that info with all of you, because some of this stuff is pretty eye-opening.

What is the ACL?

First off, the ACL is a ligament in your knee that helps give your knee stability. ACL stands for Anterior Cruciate Ligament. It literally crosses from your upper leg bone, the femur, down to the larger lower leg bone, the tibia, thus the name cruciate, meaning “to cross.”

Why Does the ACL Tear?

What Types of ACL Tears are There?

Contact ACL Tears: In this case the athlete is hit by some sort of outside force. A very violent example is when a football player or soccer player gets tackled or hit by another player and the force results in the ACL injury. You’ve seen old footage of chop blocks in the NFL – that would be a prime example of how a Contact ACL Tear can take place. Less intentional examples are out there too, of course. For instance, if there is a pile-up when going for a fumble in football, a loose ball in basketball, or if there is brawl on the baseball field, it is always a risk that one player is going to fall on or roll onto the knee of another player’s knee and possibly do some serious damage to the ACL.

The thing that sucks about Contact ACL Tears is that you really have no control over the situation. Since pile-ups, aggressive play, and accidental falls are just part of the game when it comes to many different sports, you never know when someone might experience and ACL injury. Those are the kinds of things that are best not worried about, and just hope that it doesn’t happen.

However, Non-Contact ACL Tears are different…

Non-Contact ACL Tears: In these cases, a player is simply moving about the field or court during regular play, and the positioning or movement that takes place causes the injury. One second everything is going well and then out of nowhere the player is on the ground, holding their knee, cringing in pain because the ACL Tore.

Often, what happens is one of several things:

1. Slowing Down: The athlete was sprinting and then has to slow down to a halt very quickly. This change in speed brings about the ACL Tear.

2. Landing: The athlete jumped or bounded and when they landed the forces of deceleration are too much for the knee to handle and the ACL takes the loading and pops.

3. Cutting / Angling: The athlete is moving quickly down the field of play and makes an offensive maneuver to get around another player and during the cutting motion the ACL fails and the tear takes place.

4. Changing Directions: The athlete stops and must change directions completely and in doing so the momentum is too much for the knee to handle and again, the ACL fails under the loading.

These are just four examples, but Jerry says he has seen all of these things take place over the years. And every single time there is a tear, the athlete usually misses the rest of the season, and in some cases their athletic career is very negatively affected and sometimes even brought to an end.

ACL injuries are not things that take place only at the University level where Jerry works. I’ve seen footage of baseball players who, in a rage to argue with an umpire, have tried to make a power move around their coach and in doing so have severely injured their knee.

This scenario is altogether too common in Girls’ Youth Soccer. The kids are moving up and down the field having a great time, when all of a sudden one of them goes to make a move and they fall down in a heap. Your heart sinks as they roll on their back clenching their knee to their chest.

You really have to wonder how many scholarships have been lost over the years due to injuries like this. Again, you don’t have to get a 300-lb Lineman dropped on your knee for these things to happen – they can take place at very innocent spots in games, even when doing things you have done hundreds or even thousands of times before.

Factors That Contribute to ACL Tears

Gender Descriminating Risk Factor: Unfortunately, in some ways, nature has set things up so that certain players are more at risk than others for an ACL Tear. Females, for instance, have a wider hip-to-knee angle than males. Because their hips are wider, it creates a different angle from their hip down to their knee which can lend a higher chance for an ACL to tear.

Quad Dominance: Many athletes are Quad Dominant when it comes to decelerating their bodies. If you look at the 4 main scenarios described above (slowing down, cutting, landing, changing directions), all of them have to do with deceleration. If an athlete is accustomed to achieving deceleration by engaging predominantly the Quadriceps musculature, they run an increased risk for an ACL Tear. The reason has to do with the fact that the Quads are pulling on the lower leg bone, the tibia, and contibuting to that forward translation of the lower leg, and putting more strain on the ACL itself.

Weak Gluteals: The Glutes are the most powerful muscles in the body. Although they are usually thought of as muscles that will provide the power for athletic movements like leaping and sprinting, they are often forgotten when it comes to deceleration. This is a serious problem, because if an athlete is not using their Glutes, they will more than likely HAVE to use their Quads to decelerate, which we’ve already established is a bad practice.

Tight Hip Flexors: Incidentally, another contributing factor to weak glutes is tight hip flexors. You see, in many cases, when a muscle or muscle group on one side of the body is overly tight, often, the muscle groups on the opposite side of the body suffer. This happens to the upper back muscles when the chest and torso are too tight, and it happens to the gluteals when the hip flexors are too tight. And what is one of the main causes of tight hip flexors? Inordinate amounts of time in a seated position. Many student athletes spend all day seated in class, seated on the bus or in the car, and often, once practice or games are done, they can be found seated watching TV or surfing the internet. All of this contributes to tight hip flexors, weak and inactive glutes, and poor deceleration mechanics which stresses out the ACL, potentially causing a tear.

So, the question is, how do we prevent the ACL Tear from taking place? This question brings us back to the program Jerry has been using at his University for the last several years.

Once Jerry gets the incoming Freshman into a schedule, he immediately starts running them through his program. His program immediately targets the glutes, gets them to wake up from years of dis-use, a summer spent detraining, and begins corrective action with his specific drills.

Just like any scientist, he first establishes a baseline with each athlete. He does this by assessing their deceleration abilities. He does this with an exercise you have probably heard of, called a Box Jump. 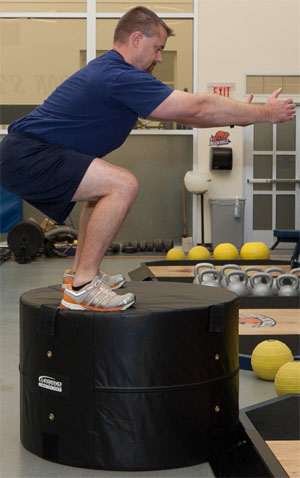 Now, when most people think of Box Jumps, they usually think of one of two things. One is Plyo-Box Training and trying to jump on top of or over the highest box possible.

The other is the Crossfit Box Hop activity where they jump up and down on top of a box for a set number of reps as fast as they can.

These are not the types of Box Jumps that Jerry does with his athletes.

Instead, Jerry has a moderate height box that the athletes can reach without too much effort, because Jerry isn’t looking for Power or Jumping Mechanics, he’s looking at landing mechanics. The bottom line is if you can’t land on a box the right way, there is almost no chance in hell you can decelerate your body properly after jumping up into the air to spike a volleyball or when performing a powerful cross-over dribble on the basketball court.

Jerry’s program starts out with the Box Deceleration drill and progresses in a step-by-step manner to more demanding drills, all the while re-inforcing glute activation.

Then, after several weeks, the athlete has essentially transformed their deceleration mechanics so that they no longer are decelerating with their quads, and instead are doing so with the correct muscles.

Jerry says that many times his athletes are able to improve their power production on the courts as well, because their glutes are so much better conditioned once they go through the program, on top of having safer, stronger knees to work with.

It’s been a great learning experience for me, teaming up with Jerry on this project. I strongly suggest you pick up our program, Deceleration Training to Prevent ACL Tears, especially if you or a family member participates in a stop-and-go sport such as football, rugby, soccer, basketball, volleyball, or lacrosse. All of these sports see far too many ACL Tears each year and many of them, sadly, are preventable.