Olympic Lifts or Strongman for Athletes?

As you may know from reading my bio on the site, my initial foray into strength training was the Olympic Lifts.

I had seen the picture of Vasily Alexeev performing his training against the rushing water of a stream and I thought it was so amazing that I wanted to train the Olympic Lifts too. 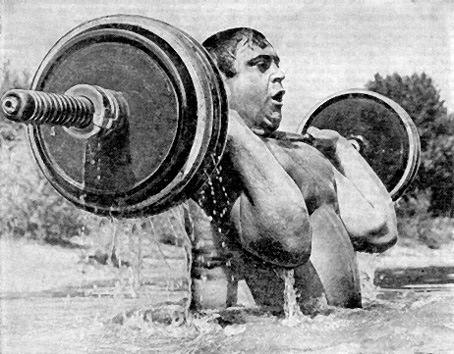 While I loved this type of training, and still love portions of it today, I soon transitioned away from it because the requirement for technical perfection was just too much for me to continue many of the more complex lifts, such as the full Squat Clean and the Snatch.

My flexibility and mobility was not where it needed to be in order to perform the lifts safely, and I was not interested in an injury, so I dropped the full lifts that are contested in Olympic Lift competitions.

This is also when I began transitioning into Strongman Training. You see, I was every bit as interested in training for a challenge as I was for the sheer strength numbers.

In a way, the fact that Alexeev was challenging himself by training in cold, rushing water was even more alluring to me than the style of lifts he was doing.

As it turns out, another great strength coach, Elliott Hulse, feels quite similar to me about the immense technical requirements of Olympic Lifts, and leans more toward Strongman style of training.

I have a guest article from him along these lines, posted below:

Are the Olympic Lifts or is Strongman Training for Athletes?

You might disagree, but hear me out on this… as an ex-college football player and currently as a strength coach, I have found the utilization and teaching of Olympic lifts to be tedious, inefficient and down-right boring.

As a college athlete I hardly found the patience to learn the correct lifting technique for the power clean. Although I held the St. John’s University power clean record my freshman season, muscling 335 lbs. (152 kg) off the platform – my technique was completely flawed and the attempt looked more like an Axle C&P in Strongman than the smooth pull of an Olympic Weightlifter.

After undergrad I studied Exercise Science at the graduate level. The director of the Masters program was an avid Olympic Weightlifting coach and ex-competitor. He spent hours with the students teaching us the finer points and intricacies of how to perform a proper Clean & Jerk. Once we were proficient enough at performing these lifts we were granted permission to then coach the university’s athletes on how to use these lifts to better their sports performance.

I remember the very first day that I was given the “OK” to start coaching the athletes; I was assigned to the football team. Since I had been a former college football player myself, I felt that I would instantly be greeted with fellowship and amity. This was NOT the case! In fact, there were a few of the kids who hated the fact that I was there. I sensed their apprehension in allowing me to coach them, and they especially hated it when I taught them how to Olympic lift.

As it happened, many of the more “meat head-ish” type football players confided in me that they wanted to, “lift heavier weights and stop wasting time with this BS.” It turned out that during the off-season prior to my debut, was when these athletes were first exposed to the technicalities of OL. It was also the first time that they were coached in the weight room by graduate students instead of their sports coach. They had previously been using a power lifting model that yielded great size and strength gains.

I do believe that including power cleans and other Olympic lifts into a Strength and Conditioning Program for football players is beneficial. But, I also believe that – the less an athlete has to “think” about a movement, the more ATTITUDE he can bring to its accomplishment. Also, I am a big advocate for saving time. I hate nothing more than “getting things RIGHT before getting them going”. It is a personal philosophy of mine that ‘success is more a product of attitude… than of technique’ (granted, that you’re not taking foolish risks and causing injury).

Consider for a moment – when you are coaching a player on the Kick-Off Team do you tell him… “Look Johnny, you’ve gotta sprint down there with your elbows at a 90 degree angle, your jaw relaxed, hands in a loose fist and be sure to breathe through pursed lips. Now, when you get to the first blocker take a short inhalation and hold your breath, brace your abdominals and furrow your brow as you dip your hips, lower your shoulder and explode though him by extending your ankles, knees and hips in a simultaneous manner.”

If this sounds crazy to you, consider that this is the way that Olympic lifts are typically taught. Instead of letting the athlete “do his thing”, we spend hours ‘breaking down’ and analyzing the movement for them. These valuable hours spent “teaching” could very well be used for building real strength and speed in a timely fashion.

Training in the weight room should be just as intense and as fun as training on the field. When athletes learn to “attack” an exercise in the gym like they attack a tackling dummy, they will develop size, strength, speed and, ATTITUDE faster than ever before. Also, for weight training to become a REAL part of your schools program, you’ve got to promote it as a benefit of being on the team, not just a necessity. I remember looking at a few small colleges when I graduated high school and one of the most important questions I asked was, “what kind of strength and conditioning program do you have?”

So, what the heck do you do if Olympic Lifts are not working? Train like the World’s Strongest Men! Not only are Strongmen great examples of brute strength, they are also well conditioned, and possess great speed and power. Strongman exercises build functional strength, speed, power and most importantly ATTITUDE! Besides the performance benefits of flipping tires and loading sandbags, Strongman training is FUN and easy to teach.

To Learn the Basics of Strongman Training,
Click the Banner Below:

2 Responses to “Olympic Lifts or Strongman for Athletes?”