Interview with the Stuntman

I’ve got a very cool interview for you today. Check this out. 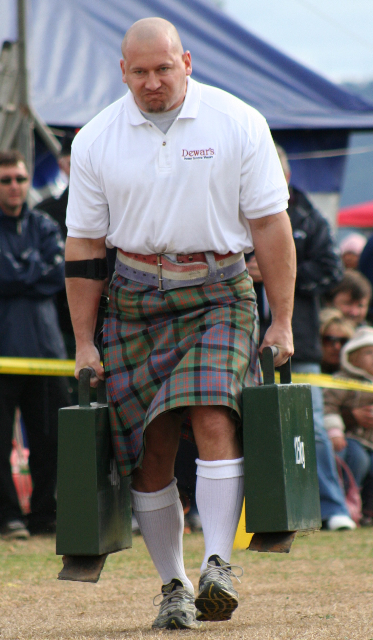 And, I am proud to say that as a surprise to Nick, I actually lined this interview up so that I could make him the latest Diesel Iron Master.

At 40 years old, Nick is in better shape than post 20 year-olds I know. His dedication to strength and high performance in Grip Sport over the years inspires me and several other participants in the sport I know, so here’s to you, Nick McKinless, Diesel Iron Master!

And what else makes Nick so awesome?

Not only is Nick a highly competitive Strongman and Grip Sport competitor, but this bad ass is also a STUNTMAN!

That’s right, Nick not only pushes his body to the limit in the wight room and on the competition platform, but this dude takes SERIOUS BUMPS in some of the biggest action movies on the big screen.

Jedd: Nick I have been following your blog and your activities in Grip Sport and other endeavors for years but for those who may not have heard of you could you tell us a little about yourself?

Nick: Hi Jedd. I’m 6ft, 215-220lbs, 40 years old and have been competing in strength sports for 20 years. I did my first grip competition back in 1996. I’m a Professional Stuntman/Stunt Coordinator for Film and Television and I also work as a a Strength Coach. I have been running the Beyond Strong blog/website for nearly 4 years now to promote the type of training I truly believe in. I live in Australia but I work in the UK.

Jedd: What is your athletic history?

Nick: I was a national standard long and triple jumper as a youth and I sprinted at county level. I swam for the county and competed in everything from rugby to snooker! (NOTE TO DIESEL UNIVERSE: If you are not familiar with snooker, and it is a billiard game using 22 balls – one cue ball, 15 red balls, and 6 different colored balls with different point valuations. Okay, back to the Interview…)

Jedd: What strength sports have younger competed in and how did you find out about serious grip training and Grip Sport? 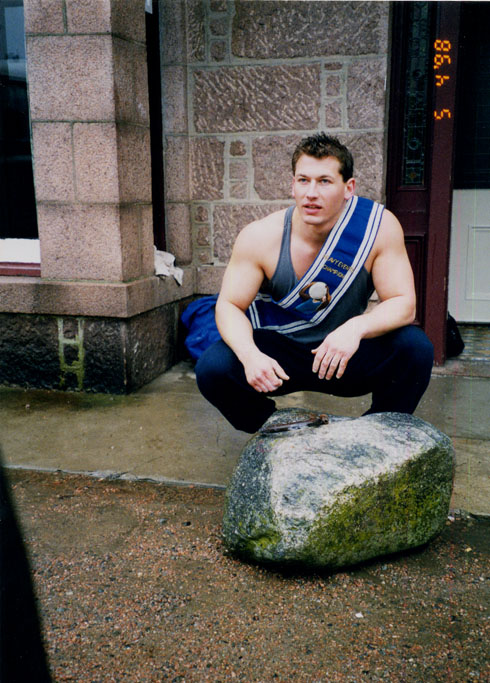 Nick: I was an athlete during my teens but I started rock climbing at 14 and it was wanting to get stronger at this that drew me to weights. I was also a huge Bruce Lee fan and read everything I could about him from his classic book Tao of Jeet Kune Do to articles and of course I watched all his movies. I went to my first gym in the same year, a place above a sports store called Bodyshapers in Cheltenham. I had also done a little Judo and Karate but I wouldn’t class my self as a martial artist.

It was from reading Bruce Lee’s forearm routines that I began doing serious grip training. After that it was around 1993-94 when I first caught the ad in Hardgainer magazine for David Horne’s Original Grip Course. I subscribed and not long after I met up with David at his gym in Stafford. Pretty much since then we’ve been great friends. I’ve been trying to beat him ever since, haha.

Jedd: What are some of the craziest feats of strength you have done?

Nick: Pretty much my best lifting comes with others around. Anytime David Horne and I train together we set personal records. I swear he breathes fire sometimes he gets so psyched up! Talking of psyched, we were particularly impressed with your Spanish inspired psyche – great stuff!! (NOTE TO DIESEL UNIVERSE: If you want to see what Nick is talking about go here = > NUEVE, PINCHE NUEVE!)

I’ve also spent a lot of time training with World’s Strongest Man finalist Laurence Shahlaei. He is another one that brings out the best in me.

I’ve never been that great in the gym. I’m still chasing that 400lbs bench press. Some of my best feats and accomplishments though are:

I’ve done most of the classic grip feats…

Jedd: Have you or do you hold any records in Grip Sport?

Nick: I’m not sure. Last year was kind of a come back and I think my records have been surpassed now. I used to hold the One Hand Barbell Deadlift record with 221kg and a few other strange one’s like the One Hand Pinch Clean and Press. I think I may have a record with David’s Wrist Developer too (Level 11?). I know I can match David on almost everything, something’s he’s better and vice versa. The difference is he’s just that bit better in competition!

Jedd: Nick you have one of the most interesting careers. Could you tell us a little about that? How did you get involved in this? 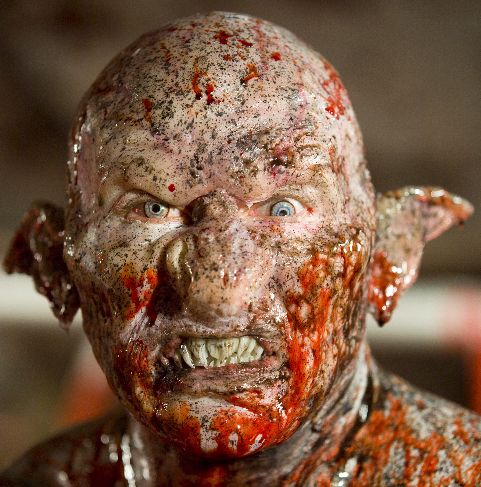 It’s something I trained for and took very seriously. It’s not something you can just fall into (no pun intended). Even since I have been doing it the level of athleticism has increased. I trained in many disciplines including rock climbing, martial arts, gymnastics, boxing, swimming, hang gliding, rope work and rigging, trampolining, racing cars and much more. It was a full time job but I had to work as well. It wasn’t easy.

I learned a good deal in Australia performing week in and week out on B grade TV shows like Beastmaster and The Lost World. The school of hard knocks is never truer than in the stunt world. I was also able to score a gig on the last Crocodile Dundee film and the Matrix films as they were shot in Sydney. Not long after that I did a job with one of my favouite 80’s and 90’s action heros, Jean Claude Van Damme. He was great.

Then I did a big budget movie called Troy with Brad Pitt. Since then I have worked with famed directors such as Steven Spielberg, Ridley Scott, Guy Ritchie, Chris Nolan and great actors like Robert Downey Jr, Heath Ledger, Christian Bale, Danial Craig, Nicole Kidman and Geoffrey Rush. It’s a privilege to be around such talent.

Over the past year on the film front I’ve been active in the final two Harry Potter movies right up until last November doing re-shoots and additional photography. I have a fight scene with Johnny Depp in the next Pirates of the Caribbean movie coming out later this year and I was involved in the pre-production stage of Captain America. I was the stunt and fight choreographer for a lot of video games and music videos last year as well. One of the best projects I was involved in last year was Ralph Fiennes’ (Schindler’s List, Red Dragon) directorial debut, Coriolanus, as his fight choreographer and personal trainer. I also performed a rather large bus explosion stunt which is featured in the movie.

Jedd: What are some of the movies and characters you have played? 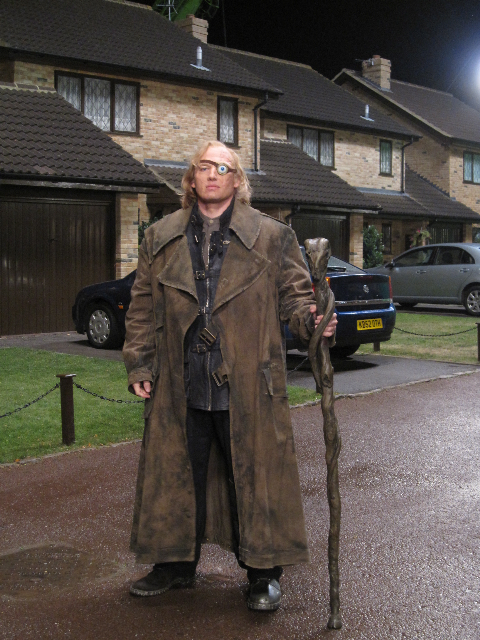 Nick: Most of my work is rather fleeting. I’m usually too big to double for actors although I doubled Brendan Gleeson on Troy and as Mad Eye Moody on the Harry Potter films. I am also the opening fight scene in Sherlock Holmes. All those hits are real and were done maybe 30 times on a super slow frame rate camera called a Phantom. That was a rough day! You can see me in Munich, lots of old re-runs of tv shows and recent ones like Merlin, usually getting beaten up. My job is to make the actors look good so you don’t see me winning that often.

Jedd: Any particular painful spots/bumps you have taken?

Nick: I have some chronic back pain and some years ago had some paralysis from a hard fall onto rocks. Last year was a tough year. I broke my elbow but had to continue working and it just kept swelling up all the time. I am due a few surgeries that’s for sure!

Jedd: What else do you have coming up?

Nick: I’m in the very early stages of starting a new business with Strongman Laurence Shahlaei. We should be opening our first custom coaching facility in this year. Small but effective, compact but brutal! I’m also taking Beyond Strong to the next level with many changes to the look of the site. I’ll be continuing to champion the greatest athletes on the planet whilst also providing innovative ways for anyone to train in the same manner and get dynamic results. Beyond Strong and it’s spin offs will kick in this year! 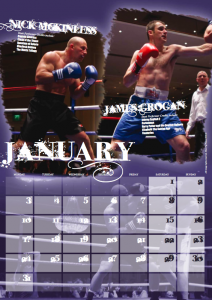 In April last year I was part of a 24 man Stunt Charity Fight night in London. We stepped up and got in the ring with seasoned fighters and fought for two charities close to our hearts. Firstly is Stanmore Spinal Unit. Harry Potter Stunt Double David Holmes was badly injured on set and is now in a wheelchair due to the serious nature of his injuries. Stanmore Spinal Unit were instrumental in his recovery. He is a personal friend of mine and many of the stuntmen who fought. The second charity is Children’s Cancer. Two of my fellow stuntmen lost their teenage sons in the same month a few years ago. They both fought at the boxing fight night, showing true heart.

In addition, Marvin Campbell, a former gymnastic Olympian (1992) and award winning stuntmen has produced a calendar showcasing all the fighters and the charities. If anyone is interesting in owning one of these totally unique and collectable calendars they can contact Marvin through Beyond Strong or at the details below. Your support and generosity would be greatly appreciated. To find out more, go here => Charity Calendars

Jedd: Nick thanks for taking time out of you’d schedule. We enjoyed the interview and look forward to hearing more about your projects.

Nick: Anytime Jedd, look forward to catching up with you in the near future!

You can nominate someone for Iron Masters

Is there someone 40 or above that inspires you to keep on training hard? Your parent? Your coach? An on-line inspiration?

If so, shoot me an email at jedd dot diesel at gmail dot com and I will put them up on the site.

This entry was posted on Wednesday, February 23rd, 2011 at 11:17 am and is filed under Diesel Iron Masters, feats of strength, grip strength, your daily inspiration. You can follow any responses to this entry through the RSS 2.0 feed. Both comments and pings are currently closed.

7 Responses to “Interview with the Stuntman”