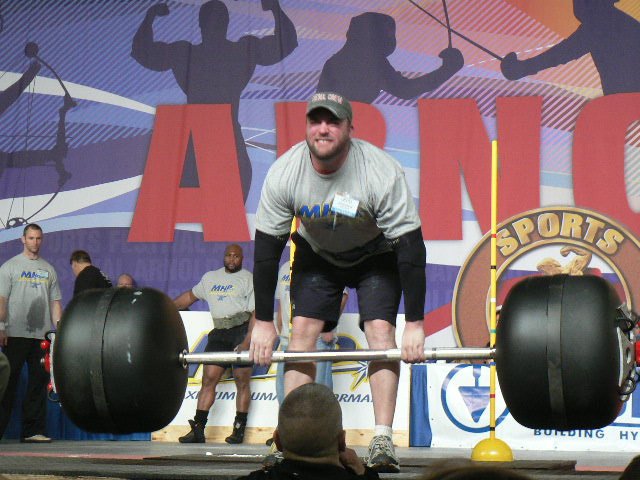 Something I have been meaning to write about for a couple of weeks now has been this year’s Mighty Mitts competition.

Mighty Mitts is a Grip Contest that takes place at The Arnold Sports Festival on the main stage at the expo hall.

That’s right, on the very same stage as the Arnold Strongman Competition and many other forms of competition (including Bodybuilding, Fitness, Figure, and more) there will be Mighty Mitts.

I was in the inaugural Mighty Mitts competition in 2010, and was chosen for Mighty Mitts 2011, but I had injured my hands to the point that I could not train my Grip with any sort of intensity from the middle of February to the end of April.

However, this year, I have put in my resume to be considered once again.

With all that aside, I just want to point out that this is a HUGE development for the sport of Grip, and I want everyone to understand just how big this is.

Now, I don’t know just how many people attend this Festival each year, but it is probably more than 50,000 people, and that may not even be close. If anyone reading this post has been there, they can tell you just how much of a madhouse the Arnold Classic can be. Having a Grip Contest at the Arnold Classic is an opportunity for THOUSANDS of people to find out about it.

And this year, the Sorinex company, and in particular, Richard Sorin, has truly stepped up to the plate to support the Mighty Mitts contest. Without getting into specifics, Richard and his company will be supplying a Hotel Room, Travel Expense coverage, and a daily food allowance for all of the competitors (the hotel room will be split, I believe).

To me, this is just amazing support of the sport that I love. I actually have a hard time putting into words just how much I appreciate this kind of support. Whether I get selected to compete or not, it is going to be an awesome contest and an unbelievable opportunity for exposure for the sport.

I, for one, am extremely appreciative of everything that Richard Sorin and Sorinex are doing this year.

It will be great to be up on the stage once again in from of 1000 people or more. If you are there, then I hope to hear you chanting DIESEL or NAPALM, or just my name.

Now, it is just a matter of time, waiting to hear the roster and whose names are selected for the list.

I will keep you updated as I hear more. For now, I just wanted to share the awesome news.

This entry was posted on Wednesday, January 4th, 2012 at 9:53 pm and is filed under Grip Sport, grip strength, grip strength competition contest. You can follow any responses to this entry through the RSS 2.0 feed. Both comments and pings are currently closed.

4 Responses to “Mighty Mitts – A HUGE Development for Grip Sport”