YOU Make YOUR Success Happen, Brother

Have you ever seen someone with a TON of Talent who looks like everything comes so freakin’ easy for them?

I have been hearing a lot of this lately, because of the “kid” I have been training with, Luke Raymond. 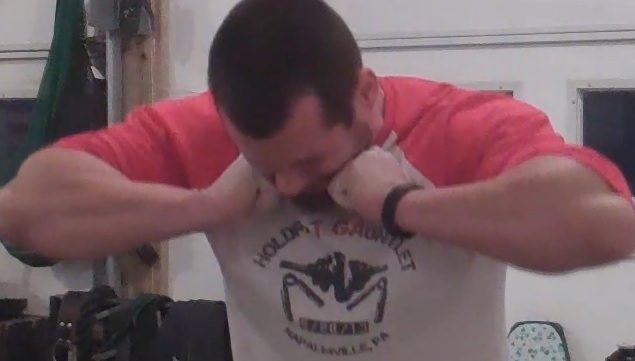 I put quotes around kid, because when I first met him, he was a new-hire right out of high school at the place I used to work and he was learning to operate forklifts.

That was 10 years ago. Now he is a Physical Therapist with a Master’s Degree.

After a couple of months, he’s already become a valued partner who has pushed me and helped me to improve while he has been tackling big goals himself.

For instance, he bent a Red Nail in his second bending session.

To give you an idea of how awesome this is, I considered myself a damn good bender in my day, and it took me over a year of training to be able to bend a Red Nail.

This week, he bent one with just Iron Mind Pads and no rubber bands, matching certification conditions.

But to say all these things are coming “EASY” to Luke…

…well that kind of bugs the hell out of me, to be honest.

“Sure, it comes EASY to him. He’s training with you.”

“Some people are just born with better genetics”

And other bullcrap stuff that I delete right away.

For people to discredit the work he has put in to do the things he has done is crazy.

It’s like someone saying a short person doesn’t even have to work hard to get jacked because they will just naturally build muscle easier.

Like if they just show up to the gym, the muscle will build itself.

Are you kidding me?

This week, he lifted the 50-lb Blob, another feat that normally takes people months if not years to accomplish.

But just because he’s accomplished these things in a fairly short time, does that mean that it all came easy to him?

And they certainly aren’t seeing workout after workout where Luke grabs onto the Blob and it does nothing but chuckles in his face.

They don’t see when Luke has a frustrating workout and is clenching his teeth, taking deep breaths, and shouts in anger because of his frustration.

They don’t see that Luke has driven 30+ minutes 2 to 3 times a week just to be able to get another chance to work on the Blob.

They don’t see the nearly 3 hour workouts on the weekends when most of our friends are sleeping off a hangover.

They don’t see the assisted lifts, the eccentrics, the triples with other block weights, the holds for time with hex blocks…

All of that goes into why these gains are coming so quickly.

He is willing to put the effort in and MAKE THINGS HAPPEN.

I am a firm believe that good things don’t just happen.

YOU make them happen!

Hope you have an awesome workout today.

This entry was posted on Thursday, January 16th, 2014 at 11:06 am and is filed under grip strength, hand strength, steel bending, your daily inspiration. You can follow any responses to this entry through the RSS 2.0 feed. Both comments and pings are currently closed.