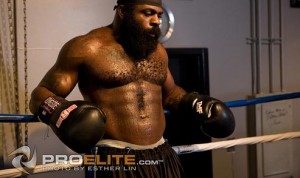 Rumor has it that a Kimbo vs. Tyson bout is a possibility. Kimbo first has to get through James “The Colossus” Thompson on May 31st. I last pics I saw of Tyson, he was about 300 lbs. That much weight on a 5′ 10″ frame isn’t a good thing for the former champ.

Obviously the fight would be a publicity stunt and wouldn’t prove anything as far as Kimbo’s legitimacy, but I’m sure Tyson could use the money.

I’ve been a Tyson fan since the beginning and think he was one of the top 5 heavyweights of all time, but Kimbo is in his prime right now (even though he is in his mid-30’s) and Tyson is far from his fighting weight.

It wouldn’t make it out of the first round, Kimbo by KO.

Weigh in with your predictions…

This entry was posted on Saturday, May 17th, 2008 at 4:13 pm and is filed under Uncategorized. You can follow any responses to this entry through the RSS 2.0 feed. Both comments and pings are currently closed.