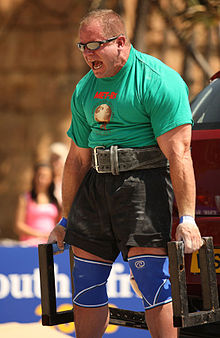 I recently had the opportunity to have some great email and phone conversations with a great American strength athlete, Jason Bergmann.

In case you are not familiar with Jason, here are some of the highlights from his Strongman competition career, which I pulled from Wikipedia:

As you can see, Jason has proven himself one of the best in the world, having made it to the finals on two occasions Of World’s Strongest Man.

Recently, he said he was looking for some different types of training he could do, as he was dealing with a pec tear. He also said he had begun doing some strongman performances and wanted to add some new feats to his repertoire, and eventually found our Hammering Horseshoes DVD.

Here is the first note I got from him:

I came home from strongman training and saw the DVD arrived today! I was going to wait to watch it and maybe try some shoes tomorrow since I had already tried to bend a few before watching the DVD (didn’t even nudge a diamond classic #2). But after watching about half the dvd on wrapping technique and learning more about the kink I gave it a go.

After giving it a few tries on the lightest shoe I had bought (St. Croix Forge polo #0) I knew something wasn’t right. Repositioned the shoe and followed the tips in the video and started to bend the shoe!

I will admit that I used a towel on my leg to get it past 180 degrees and I’m sure I will have a bruise or two. After about 5 minutes I had to see if I could do it on my right side too (torn pec on that side) and after getting everything set up right that went as well.

Without the tips and technique on your DVD it would of taken me a lot longer to figure it out if at all. I can say after bending my first shoes that it is not a trick. Getting the leverages right yes, but trick no!

Thanks for putting the DVD together and putting so much information in it. Well worth the money and when I’m looking to try another feat of strength I will be checking out your other products. Thanks.”

He says that while he enjoys Nail Bending and Braced Bending, Horseshoe Bending has been his main focus. He recently sent in some video clips of him bending some very impressive shoes he bent, the Kerckhaert SSP 10×22 #5 and the SCF Plain #3.

“Jedd,
Sending the link to me bending the Kerckhaert SSP 10×22 #5. My
technique is getting better as this shoe I was only able to kink a
month ago. Thanks again for all the help. Now it’s time to get some
bigger shoes!”

“Jedd,
I was able to bend the SCF plain #3 last night. Just for kicks I tried
the AB#6. Needless to say that is going to take some work to move that
big SOB!”

Now, if you are not familiar with Horseshoes and their level of difficulty, I grabbed the ending portion of the “Advanced Section” from our Horseshoe Strength Progression List and pasted it below.

As you will see, the first video above, the Kerckhaert SSP 10×22 #5 sits at number 29 out of 37 on the list. Pretty deep, but then in video, he wipes out the St. Croix Forge Plain Regular #3, which is number 30 on the list as well. And while these bends are not official certification bends for any competitions or lists, they are still extremely impressive. Given the fact that Jason has pretty much just started doing this, you can describe his progress as nothing less than meteoric. 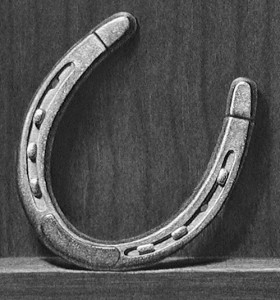 However, despite Jason’s progress, his strength levels, his determination, you HAVE TO KEEP ONE THING IN MIND – the most important part of Horseshoe Bending or any type of steel bending, is TECHNIQUE.

Jason said it himself, without the instruction, it would have taken him much longer to learn the proper technique or might not have gotten if at all. When a sheer Power House like Jason says something like that, you know it’s true.

And because he has started out in the right direction from the beginning, Jason has been able to consistently progress AND avoid injuries, allowing him to enjoy every single PR he establishes.

No matter what level of strength you have, when you combine that power with the right technique, you are able to take your bending to an even higher level. Once you dial that technique in, get ready to blow through shoes that previously seemed out of reach.

And for the absolute best instruction on technique for Horseshoe Bending, you have to pick up Hammering Horseshoes. You can get it by clicking on the banner below.

Write me a note when you start destroying shoes!

This entry was posted on Wednesday, June 13th, 2012 at 11:17 am and is filed under feats of strength, feats of strength bending, horseshoe bending, steel bending, strongman feats. You can follow any responses to this entry through the RSS 2.0 feed. Both comments and pings are currently closed.