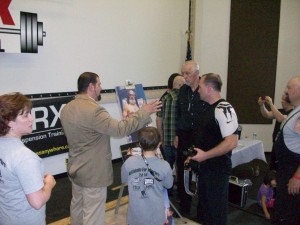 Today I have an interview with Michael Krivka, Sr. I first met Michael at my RKC certification in 2010 and then hung with him later on in 2011 at the York Barbell Museum when Slim the Hammerman Farman and the Mighty Adam Joe Greenstein were inducted into their Hall of Fame.
To the right you can see former York Employee, Mike Locondro with his brown jacket towards the left of the photo and then Michael Krivka (black shirt, white sleeve with print) is standing next to Slim “The Hammerman” Farman, on the right (black outfit, white goatee).
Recently, Michael put out a pretty cool ebook, Code Name Indestructible, based around the James Bond movies, so I reached out to him and asked him if he’d be interested in an interview. He agreed, and along the way I found out some pretty cool things about him too.

Jedd: Michael, thanks for taking the time to do the interview with me and everyone at DieselCrew.com. 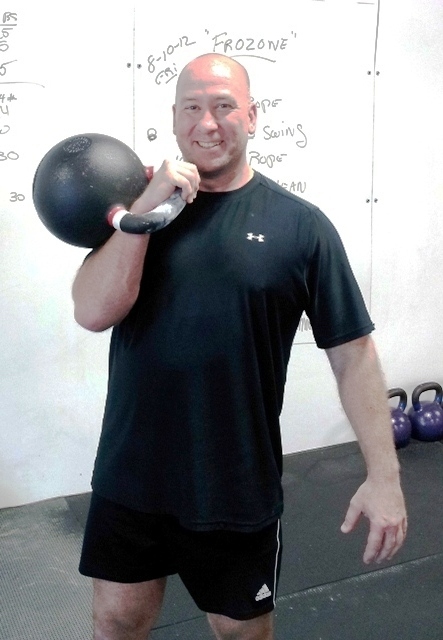 It’s my pleasure Jedd and thanks so much for the opportunity to talk with you and the community at Diesel Strength and Conditioning!
Jedd: First, could you tell us a bit about yourself, your training history, etc.
Michael: I’m a 50 year old Washington, DC native and I’ve been involved in physical training for the better part of my life. I started training in the martial arts when I was thirteen (starting with Tae Kwon Do, Kung Fu, Western Fencing, Judo, Ninjutsu, etc.) and I still teach several times a week. I’ve been a student of Guro Dan Inosanto, Bruce Lee’s training partner, for over 25 years and I’m a full instructor in JKD and the Filipino Martial Arts (Kali, Escrima and Arnis) as well an instructor in Lameco Eskrima.
You know me from the Russian Kettlebell arena where I have been an RKC (Russian Kettlbell Certified) for over a decade. I actually started lifting back when I was in High School to add some mass to my five foot ten inch frame. I graduated from High School at ninety eight pounds (scary isn’t it) and after spending some serious time in the gym working with my college football team I added eighty five pounds to my frame by the time I graduated four years later. To say that I bulked up would be an understatement. People who knew me from High School didn’t recognize me four years later!
I’m also a Crossfit Level I Trainer, CrossFit Kettlebell Trainer, and CrossFit Olympic Lifting Coach.
I know you from the realm of Kettlebell Training. Is this your primary mode of training and what made you transition to it?
I was originally introduced to Kettlebells when I was training in Sambo (Russian Combat Martial Art). I was training at one of the Russian embassies in downtown Washington, DC (with some “secret squirrel-types”) and saw a couple of Kettlebells in the corner of the training hall and asked one of my training partners about them. He showed me a couple things like the Swing, High Pull (one and two hand) and the “Two Hand Snatch” (what we now call the CrossFit or American Swing). I thought they were great because they reinforced the striking and throwing skills that we were practicing in Sambo.
Shorty thereafter a martial arts friend of mine from California mentioned that he had read about Kettlebells in a magazine (Milo) and that he had started training with them. I did a little research on the Internet (thanks Al Gore!) and found that there was going to be a two-day workshop given by Mike Mahler the following weekend so I signed up! I went to the workshop and was immediately floored by what you could do with the Kettlebell. People joke about “drinking the Kool-Aid” but man I was chugging the stuff! I fell in love with Kettlebell training and left on Sunday afternoon with the Kettlebell I was training with all weekend… and I still have it! 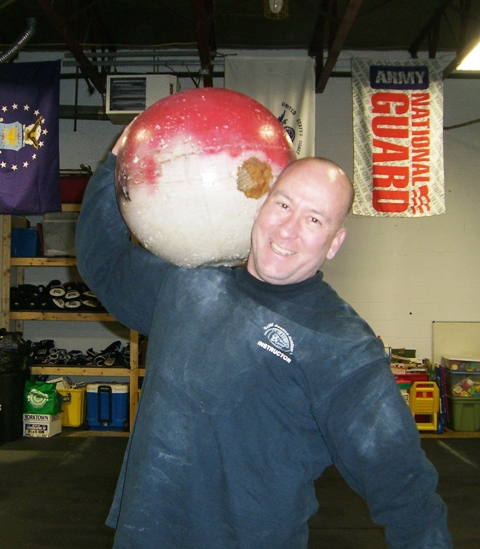 Now (over ten years later) I do most of my training with either Kettlebells or body weight with a healthy dose of Barbell work thrown, mostly Deadlifts, Cleans, Military Presses, Jerks and Snatch. I train five to seven days a week doing hybrid Russian Kettlebell and CrossFit workouts, with several martial arts classes thrown in for good measure.
What level of experience do you have as a Kettlebell Instructor or Coach?
Michael: Well, I’m currently an RKC Team Leader but have been an RKC for over a decade. I’ve attended, I think, seven or eight RKC’s, the first and only RKC Convention in Las Vegas (that’s a story for a different time!), the Combat Application Specialist certification (which was the original RKC II), the CK-FMS, and the Body Weight Training Workshop (with Max Shank and Mark Reifkind). I have also been to several non-RKC Kettlebell certifications (not a good idea once you’ve been to an RKC and seen the quality and expertise presented there) as well as CrossFit certifications and mobility/flexibility workshops. As far asexperience outside of certifications and workshops: I’ve been running group workout classes seven days a week for the last five years and prior to that was teaching classes three to five days a week. That doesn’t count the time I put in for my own training and technique development. I can honestly say that I’ve had a Kettlebell in my hands pretty much every day for almost a decade – with the exception of a couple days when I was sick or recovering from surgery! I’m not happy without my daily dose of Iron!
Jedd: For those who may not be familiar, what exactly is the RKC? 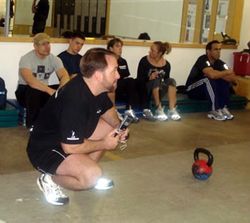 The RKC, which stands for Russian Kettlebell Certification, is a three-day certification that exposes you to the seven foundational techniques: the Deadlift, Swing, Squat, Clean, Press, Snatch and Turkish Get-up. Three days of hands-on training, critique and evaluation with some of the top Kettlebell instructors in the world will give you a strong foundation to build upon when you return home. Some people are amazed at the changes in their technical ability and are awestruck by the changes they feel over the course of a weekend. I’ve been to a lot of certifications and I’ve seen some pretty incredible work come out of them. I can honestly say that the RKC experience is the top of the line when it comes to hands-on training. I’ve been to a lot of workshops and certifications in my lifetime, between physical fitness, strength, and martial arts, and nothing (and I do mean NO THING) compares to the level of training you will receive there. Yep, it’s a lot more expensive than other certifications – and it’s worth it!
Jedd: When I saw you at York Barbell in 2011, you were running a Wounded Warrior project centered around Kettlebell Training. Could you tell us a bit more about that: what is it, how you got involved, and do you continue to do so today? 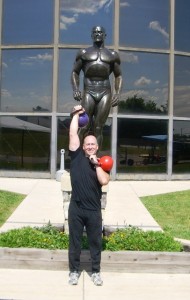 Michael: We were there as part of the events we had scheduled for a charity we started called “Kettlebells for Warriors” whose goal is to raise money and awareness for the Wounded Warrior Project and other charities that support our returning troops. We started Kettlebells for Warriors after having a discussion with my good friend Mike Locondro about how we felt we could do more to help out those who were returning with Traumatic Brain Injuries, PTSD, loss of limbs, and other physical injuries. It was a great idea but we needed a vehicle to get the process moving and we settled on using the Kettlebell due to it’s universal appeal in the military and elite fitness communities. We’ve been holding events each year and are in the process of re-focusing our fund raising efforts in order to maximize our impact. We are planning on having one large international event in 2013 and several smaller national events that will bring people together to have a great time working out and raising money for a good cause.
Jedd: Recently, you put out a new product called Code Name: Indestructible. Could you tell us about how you went about designing this program? 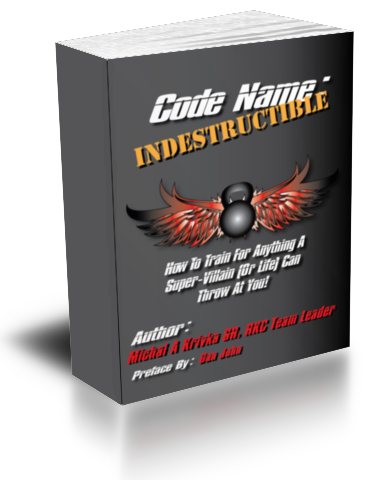 Michael: I think there are a lot of things that distinguish this program from others that are on the market right now. First, I’ve actually put people through each and every one of these workouts and get feedback on all of them. These just aren’t products of my imagination – they’ve been field-tested and refined and then tested again. Second, I’m not going to blow smoke up any of your orifices with this program – it’s hard and it’s meant to be. I’m not going “slash inches off of your waistline” or “instantly add twenty pounds to your bench press”. What I am going to do is challenge your athletic ability and make you stronger and more durable. Some of the workouts are going to make you wonder why you’ve been hiding behind a machine for so long and not doing the things that are going to make you healthier and more resilient. Finally, I’ve been around the block a couple times and the people that I respect in the Strength and Conditioning community know me and have looked over this program and have given it “two thumbs up” across the board. I didn’t write CNI to make a fast buck or to create an instant reputation for myself. My reputation and credentials are already in place and I wrote CNI because so many of my friends, colleagues, and clients insisted that I get some of this info on paper and out into the public’s hands.
Jedd: Michael, thanks a lot for all the information today.
Michael: Thanks so much Jedd for giving me the opportunity to share with your readers my thoughts on training and information about Code Name: Indestructible. I hope they enjoyed learning more about it and keep up the amazing work that you are doing at DieselCrew.com!

Follow the banner below to check out Code Name Indestructible

This entry was posted on Thursday, January 17th, 2013 at 11:48 am and is filed under advanced kettlebell training feats, how to improve fitness and conditioning, how to improve strength, how to lose fat improve fat loss, how to lose weight and get in better shape, kettlebell training. You can follow any responses to this entry through the RSS 2.0 feed. Both comments and pings are currently closed.

One Response to “Interview with Michael Krivka, Sr. Author of Code Name: Indestructible”