For a few months now, my friend Sean Dockery and I have been doing weekly to bi-weekly episodes of Grip Strength Radio, where we run down interesting happenings in the sport of Grip, as well as talk about effective ways we have found to train for Grip Strength, and many other cool topics.

Our most recent interview was with The Iron Tamer Dave Whitley. Dave is a Senior RKC, meaning he is one of the top ranking instructors in all of the Dragondoor/Russian Kettlebell echelon. He also is enamored with the olde-time strongman legacy, performs the classic feats of strength, and is also a very entertaining guy. 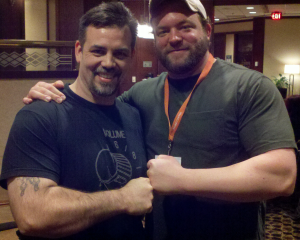 I first learned about Dave back in 2007, but never got the chance to meet him until 2009. I was at a conference and I looked to my right and there he was. I introduced myself and we instantly went out into the lobby to chat.

We shot this video:

As it turns out, on top of holding jobs in the past as a massage therapist, a rock star, and now as a top performer of strongman feats and instructor in the area of kettlebells, Dave was also, for a time, a professional wrestler.

As you will be able to tell, the content for the interview wrote itself, and I finally got my revenge on the Iron Tamer.

Also, make sure you give a good listen to the song played during the second break. It’s called “Water” by the band Hands. Doc added it in and it’s awesome. He has reached out to many record companies and almost all of them have allowed us to use their music, so stay tuned to future shows because you may just hear a future hall of famer like Guns n’ Roses or someone who will try to deny entry to the Rock and Roll Hall of Fame, like Axel Rose.

In addition to the interview with Dave, Sean and I also have a bunch of other shows we have recorded in the last few weeks:

If you are familiar with iTunes, you can sign up for subscription updates for Grip Strength Radio through the iTunes store.

This entry was posted on Monday, April 16th, 2012 at 7:50 pm and is filed under grip strength, old strongman feats of strength, strongman feats. You can follow any responses to this entry through the RSS 2.0 feed. Both comments and pings are currently closed.