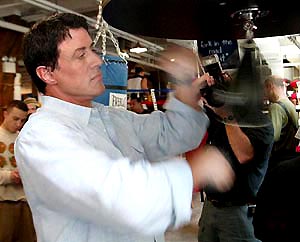 Sylvestor Stallone hits the speed bag at the Trinity Boxing gym in New York City on March 17,2004. Stallone, from the “Rocky” movies, is promoting the reality television show which will follow sixteen aspiring boxers with the final victor claiming a $1 million prize. REUTERS/Teddy Blackburn

This entry was posted on Friday, April 17th, 2009 at 9:20 pm and is filed under . You can follow any responses to this entry through the RSS 2.0 feed. Both comments and pings are currently closed.