Afraid of Failure? Not This Guy… 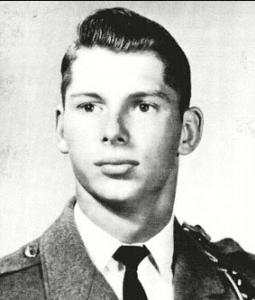 I saw an awesome quote the other day {!firstname}, and I wanted to share it with you.

It comes from Vince McMahon, and it’s about Failure.

If you don’t know Vince McMahon, he is the Chairman of World Wrestling Entertainment, and has grown this company from a small regional business to a global powerhouse.

Regardless of whether you like or agree with his product, his vision has been what has helped make it become the juggernaut it is today.

“…I’m not afraid of failure. Don’t get me wrong – I hate failing. But I’m not afraid to take chances and fall on my ass, because if I live through it I’ll be better off, and I’ll win.”

I have read and heard many stories of this man’s will to succeed. From sleepless nights working in his basement on film footage, working men half his age into the ground, to breaking every rule in the book by expanding his promotion nation-wide, this guy has never let the possibility of Failure stand in his way.

Heck, some of his projects were absolute FLOPS.

He once started a Bodybuilding League called the World Bodybuilding Federation that folded about as quickly as it started. A supplement company lasted about a year, and the XFL lasted only one season.

But instead of letting each of these train-wrecks cripple his drive, he learned from them and pressed on.

And today, I have the same kind of story related to training for you, and it involves someone named Thomas Scibelli. 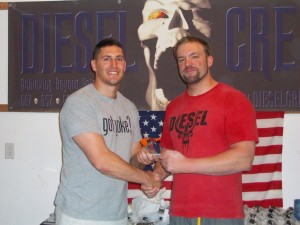 Thomas and I at Holdfast Gauntlet

Thomas was here in September for the Holdfast Gauntlet, the grip contest I ran that month.

He did a fine job in his first competition, and learned a lot, and I think he will be a great competitor in the near future, but one thing that stuck out about his first grip outing was that he actually was UNABLE to lift the half 75-lb Blob in the Medley.

Thomas was not the only one to miss this York Block Weight, so there is nothing to be ashamed of there. In fact, he didn’t dwell on his “Failure” at all.

Instead, he aimed to take care of this weakness in his armor.

Shortly after the contest, I released “Lift the Blob,” an ebook dedicated to training for one of the most well-known feats of grip strength, and lifting one of the most famous grip challenge items, the 50-lb Blob. 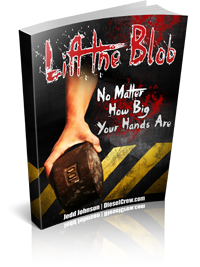 Thomas got the Lift the Blob Program, he followed it right straight through the 8 weeks, and look what he just did the other day with the Blob50, a replica of a Half 100….

In review, he could not lift a 37.5-lb Blob in September and in December, he is lifting one nearly to lockout that is 50-lbs.

I know that was an awesome feeling. I still remember the first time i picked up the Blob.

And while it’s hard to tell if Thomas got this one 100% locked out, I am sure that soon he will be lifting it with ease.

The main thing is, he put the consistent work in over the 8-week period covered in the Lift the Blob Training Program and made it happen.

Each one of you has the potential to do the same thing.

I don’t care how big or tall you are, how big or small your hands are, or even if you own a Blob or not.

None of that really matters.

What matters is what’s going on in your head…

…what you’ve got in your heart…

…and your ability to stay consistent with your training.

Lift the Blob will walk you through the same 8-week program that Thomas went through to guide you to your first Blob Lift as well.