Grip Sport, like any sport, has its funny little quirky things about it that strike people funny.

At least once a month, I am asked by someone on YouTube the same question, so I thought I’d go ahead and do a video and blog post about.

What is the Metal Thing Used with Grippers?

The metal object that you often see used by those closing grippers, especially during official certification closes and when competing or training for contests, is called a Block. The Block is used to make sure all athletes are using the same set depth (or wider) when they close the gripper.

In this video, I show you exactly how this is done.

The History of Gripper Sets in a Nutshell

I found out about Grip specialization training in 2002 and since I was a bodybuilder at the time, I thought it was insane to spend so much time training so hard on such a small portion of your body.

Then, I found out that there were Gripper Certifications that you could attain, and being that I was always hungry to prove myself physically, I decided I wanted to pursue the Captains of Crush certification through IronMind.

By 2003, I was certified for closing the #3 Gripper. At the time, the rules stated you could pre-position the gripper with your off hand, provided the last full inch of the gripper sweep was clearly visible by the judge and unaided by the off-hand.

Well, how easy is it to judge the space between two handles, exactly? Not really that easy, and pretty controversial, as it would turn out. Eventually another gripper certification was started by the Gripboard, called the Mash Monsters. A set of grippers in graduated difficulty was produced, and in order to make judging easier, instead of one inch, a parallel set was used, so you could set the gripper with the off hand, but before closing it, the video being shot of the attempt had to clearly show a parallel handle position prior to closing the gripper. This certification still remains unchanged to this day at Gripboard.com.

The way I remember it, IronMind caught wind of some gripper certs that were done with deep sets, so they changed their certification around 2004 or 2005 (I don’t remember exactly without googling), and they began requiring a credit card set – the handles could still be pre-positioned with the off-hand, but prior to closing the gripper, a credit card had to be inserted width-wise between the handles. This is what they require to this day. 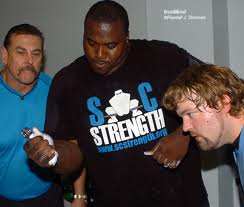 GGC 2006 – I certified Tex Henderson.
He was the first to certify with the credit card.
My hair was awesome then, too.
Image: IronMind.com

In 2006, at our Grip National Championship, then called Global Grip Challenge, we implemented a credit card spacer that the judge would slide through the handles for the athlete. Unfortunately, this created a great deal of debate because for smaller handed individuals, the wide set was giving them serious troubles.

Around this time, the use of a marker narrower than a credit card also started popping up. You could see videos from European grip contests where the competitors would set their gripper and then either they or a judge would slide the marker between the handles. 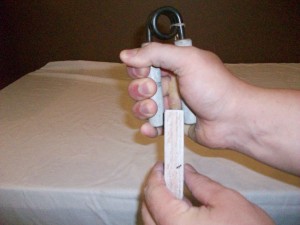 Over the years, this practice evolved. In some competitions, it was used, while in others it was not required. Then, in 2010, David Horne required a 20-mm block was required to be put between the handles prior to closing them together. In 2011, David shipped official setting blocks out to the all the promoters of the World’s Strongest Hands series. This has pretty much become the standard of setting blocks used in competitions. In almost all cases that I can think of, the athlete must pass the setting block between the handles himself. The judge is no longer permitted to do it. 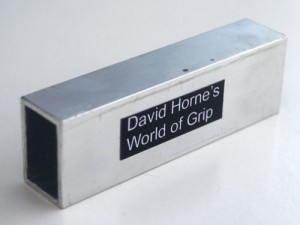 To me, while using a setting block makes the close slightly harder because there is a pause and hold prior to closing the gripper handles together, I think is a great addition to the sport. I think the blocks that David Horne produces are awesome because the narrow way they serve for a 20-mm set, and the wider way, they serve for a 30-mm set. These are the two most commonly used setting widths and they seem to be comfortable for just about everyone who competes.

Plus, with the use of the blocks, you always know that every single competitor has closed their gripper from a legal set width. There are no partially shielded closes, no drifting closes and no complaints or excuses. If someone has a weak set, they may end up taking an attempt from a wider distance, which is fine, but there’s virtually no chance someone uses too deep of a set because they must clearly show the properly swiped block between the handles.

DIESELS, I hope this has been a helpful post for you that clears up some of the questions. Setting Blocks may seem as foreign and strange as a right-handed pitcher being allowed to fake to third base before throwing to first base, but like that deceptive baseball pick-off move, setting blocks are just part of the game.

(Actually, I heard recently that the fake to third pick-off move to first is going to be out-lawed next season, but it rarely worked for anyone besides the Yankees’ Jeff Nelson anyway, and he’s been retired for several years now…)

Got more gripper questions? I bet you the answers are in my gripper Training DVD, CRUSH.
If you watch it and are still unsure, just shoot me an email and take advantage
of my 30-days of email support, like with all my products: