U.S. Grip Championship is in the Books 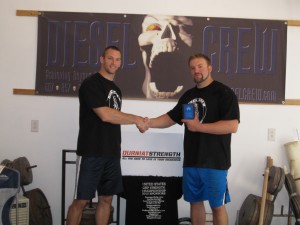 Friends, I am happy and proud to make today’s post. As you all know, I compete in several Grip Strength competitions each year, and in December 2009 I even set a World Record in one of the main events, the Two Hands Pinch.

In 2005, I was the National Champion here in the United States, but since then, I have not done better than second place on the grandest stage of United States Competition.

After 5 long years, my training has finally paid off, as this past weekend, I won once again, beating last year’s champion, Andrew Durniat. 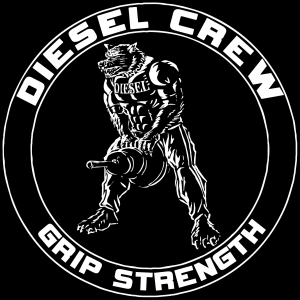 I LOVE the sport of GRIP. I love devoting time to it and helping others out with their training so that they can improve and enjoy competitions and accomplishing world class feats of strength as much as I do. To finally once again earn the title of United States Champion is a great feeling.

Going forward, I will be posting a weekly radio show on our site on the Dave Depew network, Grip Strength Radio. I did a complete run-down of everything that went down at Nationals, plus the show also includes a couple of other segments, including the upcoming Grip Strength Calendar, Classic Comment, and a few other ideas I have planned.

You can also download the mp3 of the broadcast and put it on your iPod or burn it to a disk so that you can listen to it on your commute to work.

If there’s anything you’d like covered in future broadcasts, please feel free to leave a comment at the Grip Strength Radio site.

It is my mission to help the sport of Grip grow. I plan on running several contests this year as well as traveling to others. If anyone has ideas as to how I can make the sport Grow, I am open to feedback.

Naturally, if competing at Grip is not something you are interested in, I will also be covering other things such as General Grip Training and Grip Training for Sports.

Below is the write-up about Nationals that I submitted to my hometown newspaper.

Grip Strength is a sport similar to Strongman that has been growing in size on the East Coast since 2003. Whereas Strongman contests, which often appear on ESPN involve lifting stones, pulling trucks and other FULL BODY strength endeavors, the sport of Grip focuses on testing the competitors’ hand, wrist, finger, and forearm strength.

Throughout the Grip season, contests are held throughout the United States, and competitors who meet specific qualification requirements can become eligible for the National Championship held in Bradford County each year.

The fight for the title of 2011 Grip Strength Champion was a nail biter from the start as the defending champion, Andrew Durniat from Wooster, Ohio, and Jedd Johnson tied on the first event, Grippers, each closing one rated at 182.1 lbs. The Grippers used in competition are tested with a device called a Rice Gripper Calibrator, a mechanism used to hold the Gripper while weight is applied to it in order to see how much weight is required to make the handles touch together.

Following the Grippers, Johnson pulled ahead slightly on Durniat in the second event, the Two Hands Pinch, a test of thumb strength. Johnson, who owns the World Record in the Two Hands Pinch with 256.04 pounds, had an off-day in the event, but still lifted 30 pounds more than Durniat, pulling slightly ahead of him in the standings with a lead of 2 points. 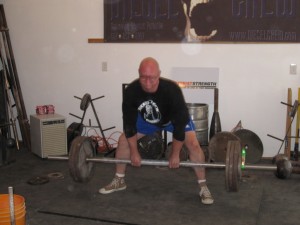 Johnson’s lead was cut in half after the next event, the Thick Axle Deadlift, as Durniat out-lifted Jedd with a pull of 423 pounds to Johnson’s 384. The Axle is a 2-inch thick bar with weights added that tests the athlete’s open hand strength, as most people are unable to get their fingers and thumb completely around the device.

With the score Johnson 29 to Durniat 28, the fourth event, the Monster Medley was upon them. This event involves a series of nearly 30 challenges that must be lifted, squeezed, ripped and bent in succession within the 4-minute time limit in order to acquire as many points as possible for the event. This Medley started outside with the athletes maneuvering a series of odd objects, and eventually working their way inside to another series of Grip challenges of ever-increasing difficulty. The Medley included carrying a 120-pound anvil with one hand by the horn, tearing a phone book, bending a bolt, ripping a deck of cards, and 20+ other challenges. Durniat once again edged out Johnson, successfully completing 24 while Johnson completed 22. 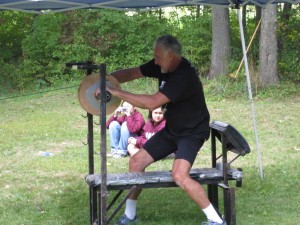 Chris Rice on the Wrist Roller

The score was now a dead heat with Johnson and Durniat locked in a tie at 38 points. The final event, the 75-foot Wrist Roller would decide the 2010 champion. This event involved pulling a sled loaded with 45 pounds up an inclined course 75 feet long. The sled was attached to a strap and was pulled up the course by turning a 3.5-inch Wrist Roller using Grip Strength. One of the most severe tests of forearm strength and endurance in the sport, this event leaves the hands, wrists and forearms completely fatigued. The competitors must give it everything they have left in order to pull the sled as far as possible within the 1-minute time limit. Johnson emerged victorious, successfully completing the 75-foot course in 49 seconds. The only competitor to do so, Johnson won the competition with a total of 48 points to Durniat’s 47.

In other highlights from Nationals, Brent Barbe from Pittsburgh, Pennsylvania rose to the occasion of National Competition setting a personal best in Grippers and the Axle and finishing third with 42 points. Rounding out the group were John Eaton (Cuyler, New York) with 37 points, Chris Rice (Crooksville, Ohio) with 32 points and Zach Coulter (Temperance, Michigan) with 27 points.

“The sport of Grip is extremely fun,” says Johnson. “Just about anybody can train for it and excel at it if they put the effort in. I enjoy telling other people about the sport and showing them how to get started. I would like nothing more than to help increase the interest in the sport and help elevate its popularity.”

Thanks for checking out the site today!

P.S. If you’d like to try your hand at a Grip contest, I have another one this weekend. Leave a comment below if you’d like more details.

This entry was posted on Thursday, September 9th, 2010 at 7:46 pm and is filed under Uncategorized. You can follow any responses to this entry through the RSS 2.0 feed. Both comments and pings are currently closed.

One Response to “U.S. Grip Championship is in the Books”