I want to take a minute and tell you a bit about the DVD I released this week called Introduction to Strongman Training.

You can get it right now, right here = > Introduction to Strongman Training. 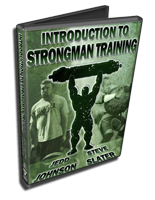 If you have just recently found out about the site, you may not realize that I used to do Strongman Competitions.

The truth is, Strongman was my first true love in the strength training world. I began in 2003, pretty much on a whim.

Smitty called me up one day in April (I think) and said, “Hey we’re doing a Strongman Contest.”

Until then it was, “Hey we’re going to do a Bodybuilding Show,” or “Hey, we’re going to do an Olympic meet,” and each time it never really took place, but I didn’t really care because all that really interested me was getting big. I wasn’t even that concerned about being cut, I just wanted to be big.

We just never ended up fully committing to those things, so they never came true. The Strongman contest ended up being a different story, though, because we laid the entry fee out there. Once we were financially committed, there was no turning back. 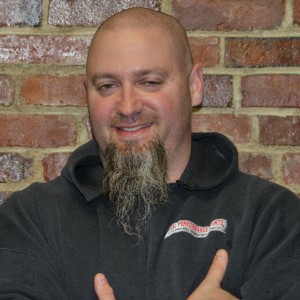 I think the reason this full-on commitment took place this time was mainly because of CJ Murphy from TPS (above). He readily posted on the DR Squat forum, and at the time so did Smitty.

I barely knew what forums were back then. In fact, when I first joined the forum, I would log in as “Napalm Jedd” and find posts that Smitty had put up and I would go in and tell Smitty he was a punk, or a wuss, or that his information was wrong, etc., etc., etc. At the time I thought all of the people on forums were a bunch of nerds or something for spending so much time on the internet.

However, at some point, I saw some things that Murph from TPS had posted about applying Westside Speed Training to Stone Lifting (Which I had just recently learned about also) and it all caught my attention.

So, we had no Strongman equipment, at all. No log, no stones, no tires, no thick bars, nothing, except for a #1 Gripper. “Screw it, we’ll figure that shit out,” we figured.

One of our first procurements was a keg. My dad grew up with a guy that owned a beer distributor so I walked in there and asked for some kegs. He gave me a bunch of what he called “retired” kegs. We did the majority of our Strongman training with the half keg we filled with water. The keg’s shape lends itself to Atlas Stone training, Log Clean, Log Press, etc very well.

Of course, we had no farmer’s walk handles either. We started out holding 110-lb Dumbbells and running down the hallway in our gym, dodging people who were walking towards us and passing people who were in front of us. Utter mayhem. I remember this one dude Mark did them with us one time and used straps to hold the dumbbells – LOSER!

The point of all of this is back then, it was pretty hard to find Strongman equipment for sale, plus it cost you an arm and a leg, so we had to improvise. I thought the work-arounds that we developed worked pretty well for us as well.

One thing that sticks out in my mind is that there was very little information out there for the new strongman competitor. Really, Murph’s DVD’s were all that I remember being able to find. A few workout DVD’s from Pro Strongmen have come out since then, and there’s a couple other DVD’s on the market, but not much.

So the time for the first Strongman comes and I figured I was going to just plain dominate my weight class. All through Baseball and Basketball growing up, I was used to striking everyone out, hitting lots of extra base hits, and over-powering people on the court, so I figured with as hard as I had worked I would walk through all of my competition.

And, I did well, but I didn’t win. I think I finished either third or fourth, which really only meant I lost.

That initial loss was probably why I got so interested in excelling at Strongman. If I had won, I probably would have lost interest and just gone back to my regular training. But since I didn’t win, it pushed me even harder.

I continued to compete at Strongman until 2006. I went back to the TPS contest in 2004 and finished second and then won it in 2005, becoming Massachusetts Strongest Man for the under 265 weight class. Remind me sometime to tell you about the 2004 contest… I also won the title of Maryland’s Strongest Man in 2004 and 2005.

Aside from becoming “Strongest Man” in a couple of states, I also did well in non-sanctioned prize money contests. I won a bunch of cash in 2005 at the Wise Wellness Strongman Contest and won a bunch more at a contest called Strength Fest – that was 2005 also. If I remember correctly, I got beat by a few dudes at the Wise Wellness show in like June and then came back and beat the same dudes easily in August.

My good buddy, Rick Walker, Don Pope, and Me

In fact, the only dude that beat me at Strength Fest was Don Pope, who is/was a Pro Strongman that competed in the World Championship on ESPN that year. That was a pretty proud accomplishment of mine.

In 2006, I started having a lot of back injuries, re-aggravating an old baseball injury and it was all downhill from there, and my last competition was in August of that year.

However, I have always continued to do many of the strongman and odd object lifts that don’t bother my back. For instance, the Log, I feel, will always be a staple of my weekly routine. I rarely miss a Log workout in a week. I just plane love the Strongman Log! 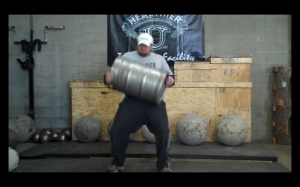 Other stuff that I do very frequently is Kegs, Sandbags, and Stones. I freakin’ love the medieval feeling of lifting big, bulky stuff.

However, what drives me absolutely insane about Strongman Training is the fact that I have been away from the sport since 2006 and the level of quality information available to new competitors, strength coaches, and hardcore trainees is still limited. In fact if you search Strongman Training DVD you get roughly 6 resources you can pick up.

The Strongman Lifts are very technical. You can’t just walk of to a stone or the log and hoss that thing around and hope to be successful, unless you are an absolute freak or the load is very, very light.

Not to mention the fact that if you go into Strongman Training blind you could end up getting injured.

So, I was talking with Steve Slater last Fall. Steve Slater is the guy who invented the first Atlas Stone molds. He has poured more stones than anyone else that walks the earth. I wanted to talk to him about selling some of his equipment on my website, including Stones because I usually get about one email per month about someone asking about them.

As we spoke, we both became more and more irritated at the fact that the knowledge base for Strongman Training has grown very little over the years, and we decided we would get together and do a DVD that could be used by anybody who wanted to start including Strongman in their training, whether they were competitors, coaches, or enthusiasts.

In November of last year, I was in Ohio for a Grip contest and after the comp I stayed at Steve’s house. The following day we went to his buddy’s gym where they did inside Strongman Training and we shot our product.

And now, the Strongman DVD is ready. You can see it here = > Introduction to Strongman Training

I am pretty proud of this DVD, because I think it is the best one I have done, for many reasons. 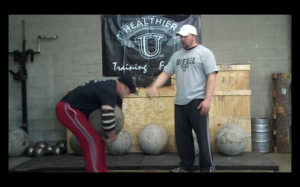 First off, the footage turned out AMAZING. The quality is pristine because I used my Flip Cam and it produced video that is more crisp than some DVD’s I have spent $60+ for. 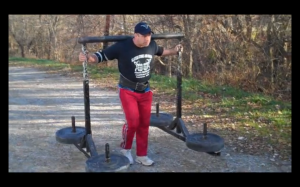 Next, the audio came out great. Sometimes when you shoot outside, you get a ton of background noise. This happens to me any time I shoot outside. We shot the Yoke and Farmers portions of the video outside but the background traffic had next to no effect on the video!

Also, I am very proud of the text and overlays I built into the final product. I had my good buddy Rory from StrongerDesigns.com helping me with the art and it all came out awesome.

So, to say the least I am pretty damn happy about this DVD, and I think you will too.

Again, if you want to compete at Strongman, this DVD is for you. If you are a coach that wants to include Strongman implements, Odd Objects, Tires, etc, into your athletic program, this is for you. And if you are just a dude that isn’t happy with a conventional workout and want to include something new like Strongman in your program, then you should get this thing.

If you have any questions on this, leave your comments below, as it is just about time for me to take the baby to the sitter. If I get her out of her schedule, she likes to pick up Odd Objects, herself, and throw them, like stools, my cardboard foam roller, and my cell phone.