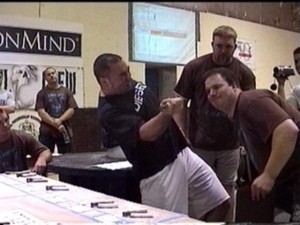 If you’ve been around the Diesel site for the last few years then you have seen us mention our good buddy, Dan Cenidoza, from BeMoreTraining.com. I have competed against Dan in several strongman contests, and trained with him countless times.

After a lay-off of a few years, Dan recently got back into nail and bolt bending. He really worked hard on improving his technique and shortly after coming back he was murdering Grade 5 bolts and even managed to get through a Grade 8.

I told him, after you bend that Grade 8, you’re just a short ways off from getting the Red Nail. 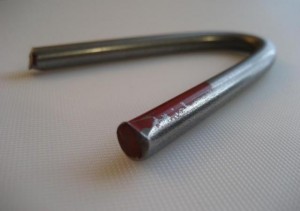 A Bent Red Nail (photo taken by lightweight on the GripBoard)

The Red Nail is the main goal nail from IronMind.com. Not really a nail, but rather a 7-inch piece of cold rolled steel 5/16 of an inch in diameter, if you bend it into a U-shape under two minutes with their company’s wraps, you get your name on their Red Nail Roster.

I knew it was just a matter of time, and just the other day I got a text from Dan saying that he had slain the red giant. Here’s the video, where he bends a couple red nails in suede wraps.

Now, in this case, since Dan used his own wraps, he is not a certified Red Nail Roster member, but I have seen Dan’s wraps and they are pretty thin and flimsy, so I’d go as far to say that if he gets his hands on some of the official wraps from IronMind, he’ll be bending reds with them within another couple of weeks.

Dan also added that the main thing he had trouble with in transitioning from the Grade 8 bolt to the Red Nail is the length difference. The 1/4-inch Grade 8’s he was bending are only 6 inches long, and since the Reds are 7 inches, it takes some time to get the nail into position and get comfortable.

Just wanted to say congrats to Dan the big accomplishment and good luck working on getting ready for official certification.

This entry was posted on Tuesday, July 21st, 2009 at 5:54 am and is filed under feats of strength bending, how to improve grip strength. You can follow any responses to this entry through the RSS 2.0 feed. Both comments and pings are currently closed.