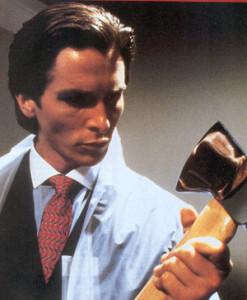 Christian Bale is my favorite actor.

Ever since the movie, American Psycho, which came out in 2000, this has been true.

But of the last 10 years or so, my favorite movie with him in it is The Prestige. In this movie, Bale plays a magician who has an on-going rivalry with another magician. They are constantly trying to one-up each other, and both of them pay dearly for their desire to be seen as “the best.”

At the very beginning of the movie, we learn that each magic trick consist of 3 parts, or acts: (1) the Pledge, (2) the Turn, and (3) the Prestige.

In case you missed it, at the end the narration goes: “You’re not really looking. You don’t really want to work it out. You want to be fooled.”

Grip is no different than magic.

In developing a truly mighty grip, there are three parts, each building upon the other like the sequence of a magician’s magic trick. They are the Lift, the Hold and the Control.

Lift – This is the foundation of a strong grip. You are breaking something from of the ground and trying to bring it to lockout. Many times, it is something cumbersome, such as a Block Weight, or something unruly, such as a thick handled dumbbell. With Grippers, you are trying to squeeze the handles together.

Hold – The second part is more intense. It involves displaying the endurance to keep something off the ground, whether by holding the implement for time, such as a Farmer’s Hold, or over-crushing the handles of the gripper.

Control – But it is not enough just to lift something off the ground. The true skill is to dominate something and make it do whatever it is you want it to. Like in the post directly below where I go beyond Blob lifting, Control is a demonstration of all-out domination of the implement, pulling beyond normal deadlift ranges and making it succumb to your will.

All too often trainees forget about the aspect of Control. They stay within their comfort zone, within the parameters of regular “lifting” and “squeezing” in their training, and do not go far enough.

This is why I say “Control” is the forgotten aspect of Grip Training.

Control is what you need to fully apply the grip strength you build to the movements and sports you play.

As an example, you can have a strong grip and hold onto Farmer’s Implements that are loaded to incredible weights, but if you don’t have control, all you will be able to do is stand there and hold them. You won’t be able to walk with them because you won’t be able to handle their mass as they swing, sway and shift each time you take a stride.

I recently set out to attain a feat that is based entirely on the element of Control – Lifting a Giant Anvil to Shoulder Height.

In the lore of oldtime strength, there is a story of George Jowett cleaning to his shoulder a giant anvil. There is confusion about the validity of this feat, as the story changes depending upon who you ask, but that is not important to this article.

What is important is developing the strength to perform such a feat.

I decided to try this feat recently, using my 112-lb Anvil. Here is my first, of curely many, attempts…

I have been told, and I agree, that the term “Clean” is not correct for the movement I am attempting. A true Clean starts in front of your shins and moves upwards with no swing, as I am performing. With that, going forward I will not use the term “Clean” to describe this lift until I can actually do it without the swing. For now, it will be called the Anvil Lift to Shoulder Height.

It is important to remember that having ultimate grip strength means to be able to not only lift, and hold something, but to exhibit complete control over it, so that it follows your command and it moves in complete obedience to your will.

And to get this Control, you must be willing to go further in your training.

If you don’t take the next step, then in the pursuit of Control, “You’re not really looking. You don’t really want to work it out. You want to be fooled.”

Learn the basics and the advanced techniques of Gripper Training with CRUSH: Total Gripper Domination

Take your Grip to the next level at The Grip Authority. Click the banner below.

This entry was posted on Wednesday, March 27th, 2013 at 10:09 am and is filed under feats of strength, grip hand forearm training for sports, grip strength, hand strength, how to improve grip strength, Uncategorized. You can follow any responses to this entry through the RSS 2.0 feed. Both comments and pings are currently closed.

3 Responses to “Control – The Forgotten Element of Grip Strength Training”