Benefits of Kettlebell Flipping and Juggling

This article was originally posted at TheGripAuthority.com, my grip strength coaching site in October of 2010 and has been slightly edited to bring it up to date.

Benefits of Kettlebell Flipping and Juggling

Kettlebell Flipping may seem like a pointless stunt to some.

It may also seem like something that has no bearing on Grip Strength.

Both of these assumptions are wrong.

The Kettlebell’s Effect on Grip Strength 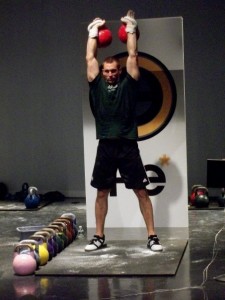 I once sat down with Andrew Durniat, the 2009, 2011, and 2012 North American Grip Sport Champion, about his training, and he told me that he felt a great deal of his Gripper Strength and his Support Strength could be credited to his years of training with kettlebells.

Now, at one time, Andrew was (and given his extraordinary athletic ability probably still could be) one of the best in the world at Kettlebell Sport. Andrew credits much of his Grip success to his Kettlebell work, and I can’t even venture a guess at the number of reps he has done.

With all of the tremendous volume that is present with Kettlebell Sport, there is an unbelievable amount of dynamic strength being engaged with the hands, fingers, and thumbs in order to control the kettlebell and reverse it’s momentum, especially during Long Cycle competition.

Now, I am not going to tell everybody they have to go take up Kettlebell Sport in order to improve their Grip.

However, I do feel there is benefit in plucking from the Kettlebell Sport in order to reap the specific benefit of Grip Strength Enhancement for the purposes we are all looking for.

The objective, then, is to figure out a way we can target that dynamic volume subjected to the hands, fingers and thumbs with kettlebells while being able to package it neatly into our training program.

Kettlebell Flipping involves maneuvering the kettlebell in a circle in the air either from one hand to the other or releasing it and then grasping it again with the same hand. Flipping is normally done directly in front of you, only.

Kettlebell Juggling involves more advanced maneuvers, including passing the bell behind the back, through the legs, and other demanding drills.

Here are some of the benefits you can take away from Kettlebell Flipping and Juggling:

Dynamic Grip Strength – As we have already highlighted, Kettlebell Flipping puts a great deal of load into the hands, fingers, and thumbs and requires rapid firing as well as eccentric strength, similar to controlling a large Gripper while the handles open.

Thumb Strength / Stability – Kettlebell Flipping is highly dependent on the Thumbs. In many Flipping Techniques the Thumb is the primary generator of propulsion to get the rotation of the kettlebell started, when done properly.

Forearm Size / Strength – We all know that the finger flexors originate in the elbow and travel through the forearm. Thus Flipping Kettlebells will increase strength, stamina and size in the Forearms, especially if you continue to push yourself to using heavier Kettlebells.

Wrist Strength – The Wrist is targeted with Flipping, especially when the Kettlebell is Flipped sideways. Also, because the handle sometimes loses its proper track, in order to correct it and flip it again, the wrist MUST be able to handle the torque as well as renegotiate it.

Hip Strength – While the Kettlebell Swing is the basic starting point for most Kettlebell Training, in my experience, the force that is created when performing longer sets of Swings is not maximal. However, with Kettlebell Flipping, especially with heavier bells, the hips MUST engage powerfully every single time in order to bring the kettlebell to the height it needs to be in order to perform Flips correctly.

Conditioning – Despite the fact that the hands are targeted heavily with Kettlebell Flipping, when you go for very high repetitions and when you use a heavy bell, the whole body must fire. This involves a great deal of musculature throughout the body and thus gets your heart pumping, increases demands of the lungs, gets you sweating and gets you breathing – this is some serious cardio potential without having to get onto a cardio machine.

So, how do you get started performing Kettlebell Flipping and Juggling?

Well, I have several short tutorials scattered all over the Internet. However, my expertise is limited primarily to the Flipping – maneuvering the Kettlebell directly in front of your body.

In my opinion, when it comes to true Kettlebell Juggling, there’s nobody I know of better than Logan Christopher.

I have seen this dude pull off some pretty amazing stunts over the years with both heavy and lighter kettlebells. I’ve even seen him perform Kettlebell Juggling with a FLAMING KETTLEBELL.

Yes, the thing was on FIRE! And I am not talking about a little blue flame like the kind that comes out of a butane lighter – I am talking about gigantic bursting flame thrower fire like you’d see at a Fire-Eater show in Vegas.

The DARKNESS just makes it even more visually impressive, but you’d see that Kettlebell Bonfire clearly if it were daytime too!

Logan is giving away a free instructional video that he shot as part of a recent seminar here: How to Juggle Kettlebells.

I love Kettlebell Juggling. It is by far my favorite form of Cardio, especially with its additional Grip Enhancing Benefits.

If you want to learn it too, check out the link above.

One Response to “Benefits of Kettlebell Flipping and Juggling”