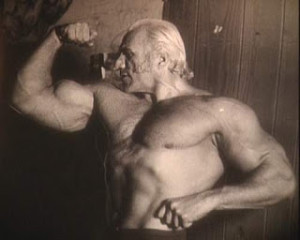 I will be honest, I have even made statements such as these in the past because I thought it was a waste of time.

After all, for quite some time, I didn’t do dedicated Bicep Training and my arms are still bigger than most people’s.

However, ever since this past August when I watched a friend tear his bicep during a grip contest, I have taken a different viewpoint on this “issue.”

I talk about it in this video:

That video got some pretty good comments (I pasted them at the very bottom of this post). A couple people pretty much said they never thought about the importance of doing some direct arm work in their training as a means of injury prevention. So, while the video gets the point across, I wanted to go into a bit more detail here at the site.

You see, I have had my share of injuries over the years, and each one had some sort of negative effect on my training.

For the more minimal ones, I might have had to skip a certain lift, or maybe skip a workout.

For the more serious ones, I might have had to miss a few workouts.

I am willing to bet that YOU have also had an injury or two. Hopefully, none of them have been as severe as a bicep tear or something else that required surgery.

However, I am becoming more and more aware of members of the DIESEL UNIVERSE who have had devastating injuries such as bicep tears and who have had to severely modify their training because of them.

It seems as though there is a fairly common belief out there that Arm Training, especially Bicep Training, can be skipped.

In some cases, those who skip it say they are getting their arm and bicep work in by performing other lifts such as Rows, Pull-ups, or even other non-traditional lifts such as Stone Lifting or Tire Flipping.

Yes, all of the above exercises do incorporate the Biceps, because they are entail pulling. The Biceps assist in pulling movements.

But, the message I want to get out there is that “Pulling Exercises” might not be enough.

Think about it this way: How many times have you heard of a Strongman Competitor tearing his or her Bicep?

Surely these competitors spend a great deal of time working the events during their training – so why would they still be tearing Biceps?

There are many possible reasons, but one contributor that I suspect is the lack of isolated Biceps training.

Sure, the compound pulling and odd object lifting movements work the Biceps and make them grow, but maybe this is not enough?

With that in mind, I encourage everyone reading to add curls back into their training. Not hours and hours of Beach Muscle Training – I think that would be excessive – but a few sets each week, training a variety of different movement patterns, to me, is important for injury prevention.

I welcome any comments you all might have along these lines. Feel free to add one below.

Question: I have﻿ a question if you tear a bicep will it always have that mishaped look or can they grow back looking normal again

Answer: That is something I do not know for sure. I know that Hulk Hogan tore a bicep and﻿ I could never tell which one it was by watching him wrestle or in still shots of him posing, so there must be cases where you don’t get the mis-shape, I’d assume.

Comment: Awesome advice Jedd. I have tore﻿ my left pec and my left biceps I had a partial tear. The pec was even worse. Great post.

Comment: Thanks for the tips! I was close of tearing my﻿ left bicep 2 weeks ago when lifting a stone, but luckily I was only hurt a few days. But I didn’t think about training it specificly.

Comment:good stuff jedd, seems like a bunch of people are tearing muscles lately.. i tore a pec last year so this hits home for me..bicep tears are even longer﻿ for rehab

Check out the Video on YouTube by clicking here

Comment from Facebook: Another note for bicep training. When Magnus Samuelsson had his bicep tears, he noted he had no problems with them in the past until he stopped training them directly. Once he did he tore them. (from Nic Branson)

One Response to “Arm Training – It’s Not Just for Bodybuilders”