The 2009 United States Hand Strength Championship is in the books and standing on top of the heap is Andrew Durniat. The rising star from Ohio took the title on Saturday, winning two events out-right and tying for first in two others.

This is how it all played out…

The first event was grippers. I felt somewhat off on grippers but actually closed a 3.5 rated about two pounds heavier than the one I closed at the Lift at Jedd’s qualifier I held three weeks earlier. The top performance for Grippers on Saturday was a tie between Andrew and Frank Snyder, who both closed a 182.1-rated Elite.

Here’s how the pack laid out:

For those of you who do not know Frank, he is an 18-yr old dude that lives about an hour away. I am hoping he makes the trip up to train and push me on the grippers. 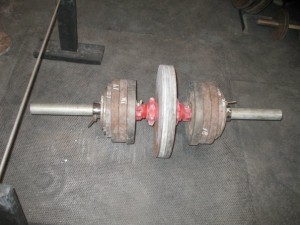 The next event was the Two Hands Pinch. If you’ve been checking out DieselCrew.com over the last few years, you know that I have been chasing the World Record in this lift since 2005. The Two Hands Pinch is contested on standardized equipment comprised of two 6-mm disks with several 6-mm and 10-mm disks between them. Records must be set by using the authentic European set-up, and we have had ours since they were developed by David Horne.

Because the disks are removable, the athletes can choose the width they would like to pinch on so that the size of the implement matches the size of their hands. Only two people chose to lift on 48-mm – Chris Rice and Durniat. The rest off the group chose 54-mm, which is the most common width used on the Euro.

At first it was reported that the implement felt slippery, so I made sure to keep the doors closed throughout the event to make sure that the conditions stayed consistent. It seemed that the plate conditions ended up improving throughout this event. With so many people gripping it with chalked hands, by the time I grabbed onto it for my warm-ups, it felt outstanding.

I took my first attempt at 234-lbs and then took a conservative jump to 238-lbs. The implement felt so good that I had to go for a new US record. I already owned the record, pulling 246-lbs and some change back in December of 2008. My thumbs hadn’t felt this good since January, so I loaded the equipment to 249-lbs and owned it. 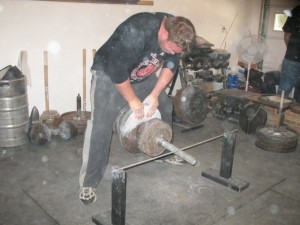 For my next attempt, I geared up for the World Record. For this, we used Chris Rice’s calibrated 1.25-lb plates for a total on the implement of 255.219-lbs. I set up tight, generated tension throughout my entire torso and squeezed so hard it felt like my fingers were breaking. The pipe of the Euro Pinch seemed to come within about an inch but never made contact. I took one extra attempt, but the last one was nowhere near close enough. I had to settle for a new US record. When the event was done the ovation I got from the crowd and the competitors sounded great. I really appreciated that.

Here’s how the rest of the Pinch fell:

The next event was the Axle Deadlift. The Axle is the official Apollon’s Axle from IronMind. It is performed with a Double Overhand grip with no hook grip. Durniat recently set a new record on this lift with 461-lbs in Georgia and I knew he was gunning for another new record-setting mark. He tried 475, but didn’t quite hoist it high enough and had to settle for 455. This cast a huge shadow on my lift of just 384-lbs. 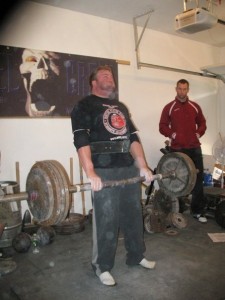 The next is one you may not have heard of – the Weaver Stick. The Weaver Stick involves lifting a wooden dowel with weight hanging from the end. The rod lays parallel and the athlete must lift it free of the platform and break parallel with it. It sounds like an easy thing to do, but the leverage created by the long dowel makes the lift extremely hard. Durniat got the best lift of the day and it was just 13.5-lbs added to the loading pin. 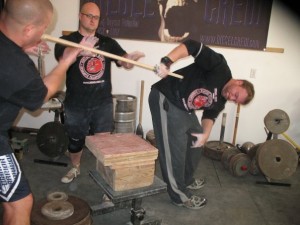 I trained this event quite a bit for the last month and a half and I was happy to get 12.26-lbs, and the 3rd place finish, especially considering my best lift in training was only a bit more than 7.5-lbs.

With four events gone, it could only mean one thing. It was time for the Medley.

I set this medley up in a way that I believe has never been done before in any grip contest. The Medley involved four stations. Each station required the completion of 6 or 7 feats. Once these required feats were completed, the athlete could then try a bonus feat. 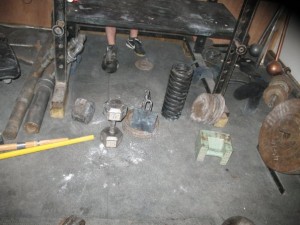 One of the Grip Medley Stations

The main feats included Vertical Bars, Blobs, Scale Weights, Pinch Blocks, Anvils, Loadable Dumbbells, Giant Coils, 5-Tens Pinch, 2-35’s Pinch and more. My goal with this Medley was to make it challenging for everyone to make it through, yet not have it be a hand-size dependent array. I think I was very successful in doing this, and while I included the Inch Dumbbell in the Medley as one of the bonuses, the athletes truly had to earn their chance to attempt the Inch by lifting the other base feats. Aside from the Inch, the other bonus feats included ripping a deck of cards while still in the box, bending a grade 5 bolt with the reverse technique, and hitting 3 reps on the Sorinex G-Rex with 90-lbs added.

It was exciting to judge this event, because through the first 6 competitors, each athlete wither tied or topped the one before him.

One of the base feats on the Bench Station was a narrow pinch block attached to a 50-lb globe dumbbell by a purple JumpStretch band. This was an implement I put together on a whim the last week before the contest, lifting easily, but I was actually told that it was an impossible feat to perform. The elasticity of the band was making it difficult to pull the dumbbell from the floor and most could not keep a grip on the block, as it would slip out of their hands and rocket back to the floor. Another feat labeled impossible to perform was the 55-lb anvil, which had to be lifted by the horn which was covered in a thin shop towel. This was another feat that I threw together in an instant and lifted easily but the whole pack before me struggled with it. Finally, the last feat that garnered impossible status was a leverage bar with 15-lbs added. The athletes had to lay their arm on the floor and rotate it in pronation.

When it was my turn to go through the medley, the leader at the time was Dave Thornton who had completed 21 out of the possible 29 feats. I was about .7 points behind Andrew and I knew if I could get just a couple more feats done than him in the Medley I might be able to overtake him in the final standings. I tore through it, tackling the impossible pinch block and the pronation bar, but could not find the handle on the towel-covered anvil. I also could not lift the fitness gear 45-lb hub, but was relying upon adrenaline to help me get it on top of the loading surface. Because I missed the anvil and the hub, I could not go for the bonus 3 reps on the G-Rex.

When Andrew took the platform for his run through the medley, he stepped it up and blew through the fitness gear 45-lb hub with no problem and got the anvil on his second or third attempt. However, he failed on the Rubber Band Block, could not finish the deck of cards and never tried the Grade 5 Bolt. He and I tied in the medley which meant he had taken the title as the National Champion.

This year’s Grip season has been a difficult one for me. I have struggled with thumb pain ever since January, which I have documented here many times. My re-hab attempts, while not getting rid of the pain, actually ended up helping me peak for a new US record in the Pinch, although not accomplishing the title of National Champion makes that record pale and nearly meaningless.

For me, the next contest is the Gripmas Carol, hosted by Chris Rice in Crooksville Ohio. I look forward to starting the ’09-’10 season off in Crooksville, competing against a couple newcomers to the sport, Craig Call, Steve Schmidt, and many other perennial contenders.

I’d like to ask you all to check out the sponsors of the National Competition. Without their support, I could not have run and presented such a fine competition.

I also have to thank my good friends, Smitty, Brad, Joe Hashey and the many competitors who helped out in judging, loading, and supporting me throughout the events.

And of course, my fiancee, Delraine, who without her I’d be a lost soul wandering through life. 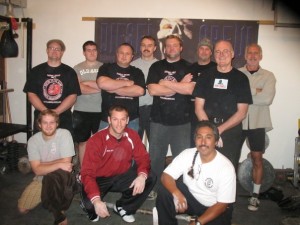 P.S. After you add me as a friend on Facebook, check out the pictures from this weekend in my 2009 US Grip Championships album. (Thanks to Megan for snapping them and Smitty for uploading them)